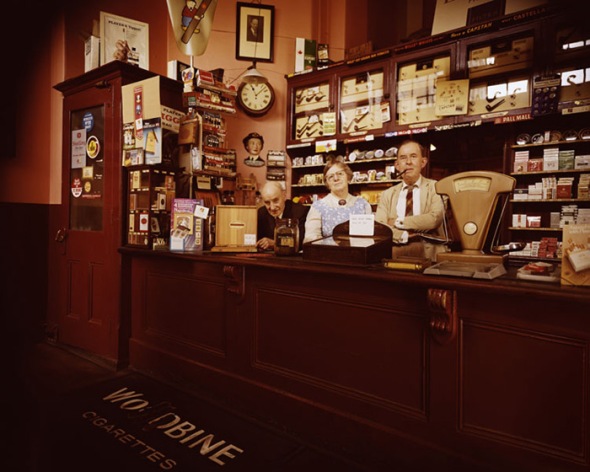 This was the second photograph I took for my book Shutting Up Shop. The tobacconist sat across the road to my studio, two doors along from ‘Morrison’s’ the chemist, the shop that started the ball rolling.

In 1956 William Hadly was de-mobbed from National Service. “A friend got me a job here telling me: ‘You’ll only be number two’. In 1959, I ended up buying the business.”

Tom Cornish opened the shop over one hundred years ago. “I never met him. He went out of business in 1911. But I still keep the picture of him – our ‘founder’ – above the clock. It shows the business has some standing.”

The shop had remained unchanged since William took over, the corner wooden phone kiosk an echo of the days when most people didn’t own a telephone. “You’d be surprised how many people comment on it. Only tobacco, I sell only tobacco, nothing else! Not even chewing gum. Every morning I’m up at 5.20, and open the shop at 7 o’clock. I shut at five in the evening. We always make sure we are in bed by 9.30. The biggest change for me was when VAT started in 1973. Most nights I do the books. The VAT has given me so much extra work.”

George Fieldwich, who had worked at a local pub, joined the shop at the age of seventy-one. William’s wife, Erna, was Austrian, and used to be a language teacher. “I enjoy the foreigners’ surprise when I speak to them in their own tongue. I am a non-smoker. I would have preferred to run a bookshop.”

William always seemed to have his pipe permanently clenched between his teeth; in fact I can’t remember ever seeing him without it. “I go all round the jars and try them all out. People come from miles around for this stuff. Once you’ve got a customer, you’ve got them forever. That’s why we don’t change the name of the shop, because it was famous.”

Erna also saw no reason to change things. “See that ‘Senior Service’ lady on the wall… We could have sold her a hundred times over. We have had many offers for her. But we always refuse.”

John Londei’s book  Shutting Up Shop: the decline of the traditional small shop is published by Dewi Lewis.