July, 1978. I am 16. I am serving out my final days as a pupil at a comically inadequate private school in Surrey’s lush commuter belt. I am bailing out before ‘A’ levels because it has not been a happy three years and I am taking the earliest opportunity to escape. To mark the end of my final term I take my camera to school. There are some interesting things to photograph.

The shrine in the locker above (it wasn’t my locker) consists of pictures cut from the pages of the sacred music title of the day, New Musical Express. The photos of the Sex Pistols, The Clash, the young Bob Geldof, Ian Dury and company were most probably the work of NME stalwarts Pennie Smith, Chalkie Davies and Kevin Cummins, and would have accompanied articles by the likes of Julie Burchill, Tony Parsons, Charles Sharr Murray, Nick Kent, etc.. By the summer of 1978, Punk was mainstream enough to be embraced by all but the most fastidious privately-educated schoolboy, even if the irony of its acceptance by future mid-management executives was lost upon the lads themselves. (Although it is worth mentioning that the much-worshipped Joe Strummer had been a pupil at a neighbouring private school a few years earlier, where he became a friend of my brother. Joe – or John – swapped his camera for my brother’s drum kit, and later credited this exchange as furnishing him with his first musical instrument. Since I first got into photography by using my brother’s camera, you could say that Joe Strummer’s Minolta got me into photography – except that he also said that his first instrument was a ukelele.)

The atmosphere of those distant, final days was a strange admixture of gleeful anarchy and leafy English pastoral; exams done, the highlight of each afternoon was the illicit visit to an abandoned theatre, a crumbling, doomed edifice in a lush wooded hollow. This imposing structure offered wall area large enough to proclaim as loudly as one was able the primacy of favourite bands, whilst the surrounding greenery furnished a sylvan setting for ritualised smoking sessions.

The following year, the theatre and the grubby enchantment of its grotto was cleared and a monumental circulatory system took its place, thus wrecking a perfectly inoffensive little suburban town. Years later, when the thunderous circle of the M25 imprinted itself upon the green hinterland of the capital, the course of the motorway took it within a few yards of the school, destroying at least one of its favoured – and, by some of us, much-hated – routes for cross-country runs. Still later, the school was hit by a scandal attached to one of its teaching faculty (not present in my time), which made the national press and prised skeletons loose from various closets. I was able to revisit a decade or so ago, after suggesting to a director friend that it would make a good location for an episode of a TV detective series he was filming. I visited the unit on location; and it seemed to my 40-year old self that the entire school had been demolished and replaced with an 8:10 scale replica.

The late 1970s have become subsumed into the nostalgia business, and there is something absurd and not a little nauseating about the era being trumpeted as some kind of lost eden.But the youth we are given is the only one we have; as some Facebook wag said recently, Punk was for my generation what World War 2 was for our fathers’. (And what did we get afterwards? The New Romantics. That has always struck me as an indication of cultural failure.) I felt largely out of sync with my time then and, predictably enough, have felt largely out of sync with it ever since. In any case, these 35-year old photos strike me as being better than they have any right to be, and almost persuade me that I knew what I was doing when I took them. This is what our memories should look like: a flattering improvement on reality – and they are dedicated to anyone finishing school this month. Someone like my daughter, in fact. 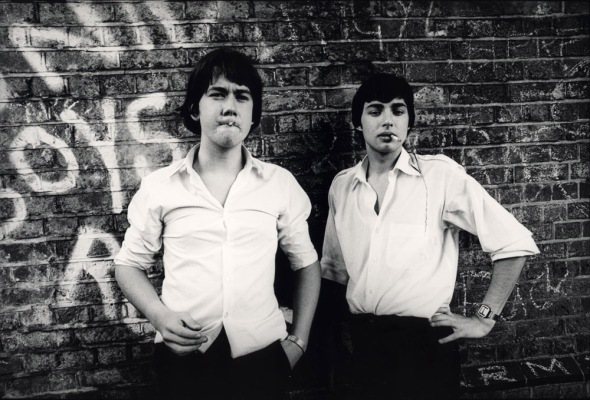 Don’t Put Your Daughter On The Stage

Some years ago when I was returning from the Far East on a very large ship, I was pursued around the decks every day by a very large lady. She showed me some photographs of her daughter, a repellent-looking girl, and seemed convinced that she was destined for a great stage career. Finally, in sheer self-preservation, I locked myself in my cabin and wrote this song:

Don’t Put Your Daughter On The Stage, Mrs. Worthington.

It was not till the winter was well advanced that he began at all to explore the region in which he lived. Soon after his arrival in the grey street he had taken one or two vague walks, hardly noticing where he went or what he saw; but for all the summer he had shut himself in his room, beholding nothing but the form and colour of words. [. . .]

Now, however, when the new year was beginning its dull days, he began to diverge occasionally to right and left, sometimes eating his luncheon in odd corners, in the bulging parlours of eighteenth-century taverns, that still fronted the surging sea of modern streets, or perhaps in brand new “publics” on the broken borders of the brickfields, smelling of the clay from which they had swollen. He found waste by-places behind railway embankments where he could smoke his pipe sheltered from the wind; sometimes there was a wooden fence by an old pear-orchard where he sat and gazed at the wet desolation of the market-gardens, munching a few currant biscuits by way of dinner. As he went farther afield a sense of immensity slowly grew upon him; it was as if, from the little island of his room, that one friendly place, he pushed out into the grey unknown, into a city that for him was uninhabited as the desert.

At 11.30 a.m. (UK) today, Thursday 4 July, Radio 4 is broadcasting a documentary about Arthur Machen and his ‘disturbing’ visions of a world beyond our own.

Under the hive-like dome the stooping haunted readers
Go up and down the alleys, tap the cells of knowledge –
Honey and wax, the accumulation of years …
Some on commission, some for the love of learning,
Some because they have nothing better to do
Or because they hope these walls of books will deaden
The drumming of the demon in their ears.

Cranks, hacks, poverty-stricken scholars,
In prince-nez, period hats or romantic beards
And cherishing their hobby or their doom,
Some are too much alive and some are asleep
Hanging like bats in a world of inverted values,
Folded up in themselves in a world which is safe and silent:
This is the British Museum Reading Room.

Out on the steps in the sun the pigeons are courting,
Puffing their ruffs and sweeping their tails or taking
A sun-bath at their ease
And under the totem poles – the ancient terror –
Between the enormous fluted ionic columns
There seeps from heavily jowled or hawk-like foreign faces
The guttural sorrow of the refugees.

[The Reading Room is now merely an exhibit, the centre piece of Foster and Partners’ Great Court. The scholars now have to go up the Euston Road to the British Library.]