When I was a boy, Halloween was a shadowy, elusive affair; the occasional carved pumpkin glowing in a window; the occasional fleeting glimpse of a reveller skipping away in a witch’s hat – usually some person you didn’t know and had never seen before. As a festival, it was upstaged by Bonfire Night, and I was frustrated by Halloween in those days. There was nothing you could buy, or be given in connection with it. Today, there is a great deal you can buy, as a result of the promotion of Trick or Treat, by which Halloween has eclipsed Bonfire Night and ghostliness has given way to mock horror. In the weeks before Halloween, Asda stores offer, amid a landslide of plastic tat; the Asda Squeezy Eyeball, the Asda Rat, the Asda Inflatable Coffin, the Child Grim Reaper Outfit (‘one size fits all’), the Adult Grim Reaper Outfit, the Inflatable Pumpkin Cooler (not for cooling pumpkins, you understand), the Skull Martini Shaker.

Asda is American-owned, and Trick or Treat came to us from America. The British folklorist Doc Rowe, believes that the Trick or Treat contagion began with a programme broadcast on BBC2 in the early ’70s as part of a documentary strand called Look Stranger. It depicted life on the American airbase in Woodbridge, Suffolk, and showed the children trick-or-treating. ‘Within two years,’ Doc Rowe told me, ‘all the tabloids were running features on how to dress up for the occasion.’ But his point is that this was merely the re-introduction into this country of a tradition rooted in psychology.

It helps to think of both Halloween and Bonfire Night as outgrowths of the Celtic celebration called Samhain, which marked the turning of their year and the beginning of winter. Samhain was associated with the lighting of fires to honour the dead, and defy malevolent spirits. The medieval church both denounced the festivals as diabolic and sought to appropriate aspects of them in the shape of All Saints Day on November 1st (on which the sanctified are honoured), and All Souls Day on November 2nd (a more democratic honouring of all Christian souls). According to Doc Rowe, ‘By tarring Halloween with an occult brush, by caricaturing it that way, the church made it an occult event.’ But while the original Halloween might not have been thoroughgoingly sinister, it did incorporate games and rituals of licensed naughtiness. All Souls Day, for example, was associated with Soul Caking, wherein poor Christians would say prayers for the departed relations of wealthier ones in return for food – and you can see how there might have been trouble if the rich didn’t play along.

It is likely that these traditions, these precursors of Trick or Treat, were taken to America by Scottish and Irish emigrants of the mid-nineteenth century … so the Asda Inflatable Coffin is actually our fault. But Doc Rowe believes these customs are ineradicable in any case. ‘The more you suppress these things, the greater they become.’ Apart from the Church, he identifies the main suppressors as ‘the health and safety camp’. I know what he means, and I wonder how long it will be before the words ‘high visibility vest’ come up in a ghost story.

Chaldon Church is a tiny and ancient (11th Century) church tucked away in an unnervingly isolated hillside location about a mile north of the junction of the M23 and the ‘Magic Roundabout’ (a.k.a. the M25, London’s present-day Roman Wall). The church is famous for its terrifying medieval wall painting, described by Exploring Surrey’s Past thus: ‘The mural on the west wall of Chaldon church is one of the earliest known English wall paintings – it dates from about 1200 and is without equal in any other part of Europe. It is thought to have been painted by a travelling artist-monk. The picture depicts the ‘Ladder of Salvation of the Human Soul’ together with ‘Purgatory and Hell’. Wall paintings of this kind were intended as a visual aid to religious teaching. The whole picture is in the form of a cross, formed by the Ladder and the horizontal division between Heaven and Hell.’ No photo can adequately convey the power of this mural, or the sense of unease I experienced whilst photographing it on a bleak, windswept afternoon 20+ years ago.The medieval imagination retains its capacity to disturb; and the thrum of traffic from the nearby motorways seemed very distant indeed. 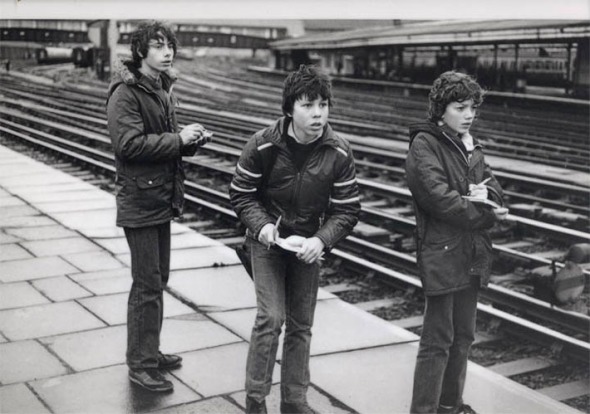 The Death of Trainspotting by Andrew Martin:

It took me a day and a half of searching before I found any trainspotters in London. They were standing at the far end of platform eight at King’s Cross. David Burrell carried a camera, Paul Rea a notebook. They were both in their sixties, both down from Manchester, and staying at West Hampstead, which they found convenient for Willseden Junction. Our conversation was hampered by several modern railway blights. There was nowhere to sit, and then there was nowhere to dispose of our cardboard coffee cups; we kept being interrupted by announcements telling us not to lose sight of our belongings. Our conversation was in fact a study in melancholia, covering many of the causes of the decline of trainspotting, including the latest and deadliest of all …

Paul told me he’d started trainspotting in the fifties ‘by standing on a bit of unadopted track near Newton Heath maintenance depot. We weren’t supposed to stand there but nobody minded.’ In the early eighties he’d regularly come down to London on spotting trips with the Lancashire Locomotive Society, and I asked if this body was thriving. ‘Thriving! We used to fill up a fifty-two eater coach every time. Now it’s a mini bus with twelve at the most.’

The three of us were standing next to a typical sort of modern train: a ‘multiple unit’. It would strike the casual passer-by as a series of carriages with no locomotive. “Not very interesting is it?’ I suggested. ‘Not really’, he conceded, ‘but in my mind this place is still full of Atlantics [big steam engines]. I still see it the way it was in The Ladykillers’. I asked the two whether they’d had any trouble from the railway authorities. ‘Two years ago’, said David, ‘when I was taking pictures on Manchester station, I was questioned by a station official. Nothing came of it, but it was, you know, close questioning.’

Others have been more greatly inconvenienced by the increased security across the network, and it appears that one unexpected result of the villainy of Osama bin Laden could be the death of trainspotting. It come down to a question of identity. Who is to say that the three blokes on the end of the platform with their notebooks, cameras, flasks of coffee and Blue Riband biscuits might not be members of Al Qaeda?

The June issue of The Railway Magazine reports an ‘alarming’ increase in the number of letters from readers complaining about the heavy-handed policing of stations. It also draws attention to a poster recently published by the British Transport Police urging the public to look out for photographers who seem in any way ‘odd’. The Railway Magazine magnanimously concedes  that photographers of trains might look odd to some. But haven’t we Britons always prided ourselves on our oddness?

‘It’s not a systematic persecution’ says Chris Milner, deputy editor of the Magazine. ‘You just get these pockets of jobsworths who don’t know the guidelines’. After the London Tube bombings of July 7th 2005, Mr Milner was party to the drawing up of guidelines intended for people wanting to take photographs on railway stations. They are accepted by Network Rail and the British Transport Police, who indeed publish them on their websites. Photographers are expected to report to station staff, and say what they’re about. They are of course expected to keep away from the platform edge. Given the nanny-ish mindset of modern railways (which determines that all train fronts and rears must be painted a revolting yellow) it comes as no surprise that railway photographers are asked not to wear high visibility jackets – this for fear that they will be confused with station staff.

Mr. Milner detects an irony in the implicit wariness of railway photographers. ‘On the day of the London tube bombings, sir Ian Blair was asking for people to come forward with any pictures they might have taken.’ Austin Mitchell, MP and keen amateur photographers, sees another irony: ‘We are all photographed dozens of times every day on CCTV, so while the government can photograph us, we can’t photograph anything else.’ According to Mr. Mitchell, who was recently stopped from taking pictures at Leeds station, ‘Photography is a public right, and that should be made absolutely clear.’

… an extract from a longer article written for The Times in 2008.

The Rainbow Theatre, as the Art Deco Astoria cinema was renamed in 1971, played host to some of the most seminal moments in rock music history, from the first concerts held there in the 1960s until its closure as a music venue in 1981. It was here that Jimi Hendrix first burnt his guitar, where Eric Clapton had his all-star ‘comeback’ concert in 1973, where Pink Floyd tried out Dark Side of The Moon, where The Clash played host to their own riot in 1977 and where Frank Zappa was pushed from the stage into the pit by a disaffected audience member in 1972. My only personal experience of the Rainbow as a rock venue was seeing Muddy Waters play to a capacity crowd in (I think) 1979, cheerfully oblivious to the full-blooded fistfight raging in the stalls. Just as cherishable was my impression of the extraordinary interior, an Arabian Nights fantasy of palm grottoes under a nocturnal desert sky. This exquisite interior is surely the main reason for the building’s listed status; it would have been lovely to have secured a picture of its fabled decor  …

Following the closure of the Rainbow in 1981 the building was largely disused until it was bought by the Universal Church of the Kingdom of God, a Brazilian Pentecostal Church, in 1995. The former Rainbow is now the Church’s UK headquarters. I knew nothing of the Church or its activities when I visited to photograph the exterior of the building, but I discovered that the Church is sensitive about its image: an agitated young man dashed out of the ‘Moorish’ foyer (can a church have a ‘foyer’? Discuss), ran across the street to where I was photographing and grilled me on my intentions. He deflated a little when I mentioned my interest in the building’s musical past, but insisted that I needed permission from the Church to take photos, at which point the conversation became rather less civil.

A cursory internet search helped explain my interlocutor’s jumpiness, as it appears that the UCKG has acquired a rather dubious international reputation; but more immediately sensitive to local sensibilities is the involvement of a former pastor of its Finsbury Park outpost in the Victoria Climbie case, adding yet another level of shame to that sordid and preventable tragedy. The Rainbow stood as something noble and glorious in its way; the headquarters of UKCG is something else, something monolithic and far less culturally benign.