East Ham. I’m still only in East Ham. I walk down the cracked concrete road under an arborial sky on the road to Vietnam in all its artifice.

The derelict gas works is dressed with imported Spanish palm trees hanging their heads, famished in a cold climate. The wrong choppers and the wrong soldiers. A bellicose nest of English squaddies squat in a huge marquee, drinking tea and intermittently stuffing their faces with carbs and gravy.

Further still from here the final act is played out, the monolith that is Millennium Mills made of indestructible stuff: concrete and thick muscle-studded girders and lots and lots of asbestos. Made of all these things yet held together with an austere elegance. She casts a shadow of disdain across the ticky-tacky Barrett homes that now blister one side of the elegant watery fingers of Albert Docks.

I left the day I arrived, after a morning of basic drilling, Sgt. Lee Ermey’s venom still damp on my face.  I walked back the way I came. I was a kid. I didn’t know any better, I didn’t know Kubrick was one of my favourite directors. I kicked my heels walking slowly down the road. I’ve been kicking myself ever since.

Micheal – who was a young dance student at the time – was engaged as a ‘marine’ extra on Stanley Kubrick’s Vietnam epic Full Metal Jacket, which recreated Saigon and Hue in East Ham. The unit base was at Millennium Mills. Lee Ermey played the drill sergeant in the film, having been originally hired as a military adviser.

In late 1972 I made the journey to Leicester Square to see A Clockwork Orange. As with all Kubrick’s
films I thought the film was visually stunning and I loved the use of music throughout. The physical
and sexual violence seemed to me more theatrical than factual and I was astonished to hear a year
later the film had been banned.

All thoughts of the film had long gone when I crossed the footbridge across Yarnton Way
to Riverside School, Thamesmead in 1976. I had no idea I was entering a scene from Kubrick’s vision
of a desolate and violent Britain. My aims were simple; I was going to use the camera to show my
pupils that they were great, to show them that we were all worthwhile.

From A Guide to the New Ruins of Great Britain by Owen Hatherley:

It’s impossible to praise the original Thamesmead without caveats. There were never enough facilities, the transport links to the centre were always appalling, and the development was always shockingly urban for its outer-suburban context. Regardless, it is something special, a truly unique place. It always was, and remains so in its current, amputated form.

Unlike its successors, it’s flood-proof and still architecturally cohesive, after decades of abuse. Around Southmere lake you can see, just about, how with some decent upkeep and with tenants being given the choice rather than being dumped here, this could have been a fantastic place … This is basically a working-class Barbican, and if it were in EC1 rather than SE28 the price of a flat would be astronomical. Today it feels beaten and downcast, and it only ever gets into the news through vaguely racist stories about the Nigerian fraudsters apparently based here; but its architectural imagination, civic coherence and thoughtful detail, its nature reserves and wild birds, have everything that the ‘luxury flats’ lack.

DS:  Eddie Mirzoeff, producer of Birds-Eye View: The Englishman’s Home has brought to my attention the commentary John Betjeman wrote and narrated over aerial shots of the very beginning of the Thamesmead section of the film:
Thamesmead is to be built on Plumstead Marsh.
Another town – how human will it be?
New towns, new housing estates,
New homes, new streets,
New neighbours, new standards of living,
New financial commitments,
New jobs, new schools, new shops…
New loneliness, new restlessness,
New pressure, new tension…
And people:
People who have to cope with all this newness,
People who cannot afford old irrelevancies,
People who have to find a God
Who fits in.

Where Alex walked … watch him pitch his droogs into the cold, cold waters of Southmere Lake here.

Stanley Kubrick on the set of A Clockwork Orange. © Dmitri Kasterine 1969.

(… and with that, Alex and his three droogs start attacking an old tramp lying in the underpass shown below.)

This week’s offering on The London Column is a short series on Stanley Kubrick’s use of London as a giant prop basket.  Dmitri Kasterine’s portrait shows the director in his pomp: extravagantly booted, Arriflex to the ready, the world-conquering auteur of 1969. Only 41, he already has The Killing, Spartacus, Lolita, Dr. Strangelove and 2001: A Space Odyssey behind him, an amazing achievement – which might explain why he looks a little weary. But his tiny camera and huge boots suggest the nature of his new project, a film far removed from the 70mm, Cinerama world of 2001. SK’s new one is set much nearer home.

Kubrick’s withdrawal of A Clockwork Orange in the UK – a ban that lasted from the late ’70s until his death – lent the film a mystique for all those British film fans unable to see it. I bought a pirated VHS tape of it (£15 in 1991) from a stall in Greenwich market and was, inevitably, hugely disappointed. A friend who watched it with me commented ‘Whatever I expected, this isn’t it.’ It is prescient in many ways, especially in its depiction of the dissemination of sexualised imagery (even if it exhibits some old-world sexism in the process), but time has not been kind to the Kubrick/Burgess brand; Kubrick’s other films of the ’60s and ’70s stand up much better. But it remains a terrific showcase for 1960s architecture.

Kubrick shot A Clockwork Orange quickly and cheaply in found locations within easy reach of his Hertfordshire lair. Carefully chosen new builds in Wandsworth, Uxbridge, Sydenham, West Norwood, Borehamwood and, most famously, Thamesmead, served as ready-made cycloramas for the director’s realisation of Burgess.  The film’s opening atrocity is committed by Alex and co. in an underpass beneath Wandsworth roundabout. Like the Westway and the approaches to the Blackwall Tunnel, the roundabout and its environs constitute a sort of Birmingham in London: an imposing 1960s circulatory system just south of Wandsworth Bridge, complete with truncated and pointless autostrada carrying traffic to and from Wandsworth Common, where the motorway peters out in despair. (Wandsworth roundabout’s other claim to cultural distinction is the Sunday in 1973 when, during a furious row with his wife Jill Bennett, John Osborne drove his Mercedes into it.)

The pedestrianised centre of the roundabout is an assemblage of geometric concrete forms, served by brooding, permanently shadowed underpasses: ideal for Kubrick’s purposes and, subsequently, anyone else seeking to create representations of urban anomie. In fact, the association of Brutalist buildings with urban hopelessness has become such a cliché that it is worth noting that A Clockwork Orange pioneered the look. Francois Truffaut had shot Fahrenheit 451 in similar fashion a couple of years earlier, using Roehampton’s Alton Estate as a setting for a future society where the printed word is forbidden; but the dreamy, otherworldly mood of his film is worlds away from Kubrick’s visceral scenario. In seeking a cinematic equivalent for Burgess, Kubrick used Brutalism to create a visual shorthand for future awfulness. One can only imagine the dismay of early seventies architects and civic engineers seeing the finished film, which simultaneously treasures and trashes the well-meaning buildings on show, and explicitly links massed concrete with looming dread.

If Kubrick were making the film now, one wonders what visual cues he would employ. The social idealism of Brutalism has been supplanted now by an aggressively ingratiating public architecture based on consumerism, a landscape pithily described by Owen Hatherley as ‘the post-1979 England of business parks, Barratt homes, riverside ‘stunning developments’, out-of-town shopping and distribution centres.’ Which locations would Kubrick use today? Bromley? Woking, maybe?  Corporate faux-vernacular would offer the right look. Saturday night in a modern British provincial town offers ample scope for rape and pillage, the pedestrianised shopping precinct the perfect setting for a spot of ultra-violence. Hell is the walkway between Nando’s and Asda. 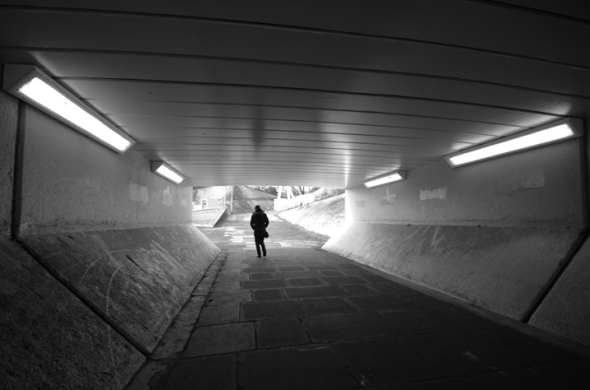