When Boulez met the Womble.

The Wombles, in their Disney-esque costumes, are an enormous success on television with children of all ages, and their signature tune was an enormous pop hit for CBS. Needless to say, Boulez had never heard of the Wombles but with a patience rarely given to such formidably intense artists, he willingly joined in the joke.

These photos from High Fidelity form part of a report on the recording of two monumental Schoenberg works by the BBC Symphony Orchestra under Pierre Boulez. The recordings, for CBS – now Sony – were made in West Ham Central Mission – now the Memorial Community Church, Plaistow – which enjoyed a brief spell as a recording venue for orchestral music in the 1970s, until the interior of the building was altered and its spacious acoustic properties lost for good. Boulez was there to record Schoenberg’s Gurrelieder and Moses und Aron. 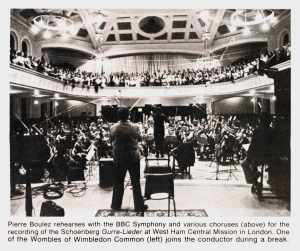 Someone at CBS thought it was a good idea to send a Womble along to hug Boulez for a photo, and thus Orinoco (or is it Great Uncle Bulgaria?) greets the composer of Le Marteau sans Maitre. Just as one doesn’t expect to see Michel Foucault cosying up to Roland Rat, or Gore Vidal doing a turn on The Basil Brush Show, the sight of Boulez in such company is slightly disturbing. Apart from the CBS connection, Boulez happened to be chief conductor of the BBC Symphony Orchestra at the time, and The Wombles were being relentlessly plugged by the BBC as a sort of corporate emblem; hence, the photo is a souvenir of a poorly thought-out PR opportunity, as well as a reminder of the mysterious reach of the Wombles and their co-creator Mike Batt. Inside one of the Womble suits was Chris Spedding, a virtuoso rock guitarist who was once (allegedly) considered as Mick Taylor’s replacement in The Rolling Stones, and who went on to produce records for The Sex Pistols; one would like to think that it is Spedding himself who is Wombling next to Boulez on the podium, but it probably isn’t. Apart from The Wombles, Batt also gave the world Bright Eyes, produced the likes of Steeleye Span and Cliff Richard, was sued by the estate of Boulez’s one-time friend John Cage for a joke at the expense of 4’33”, and who – in the imagination of Chris Morris – co-wrote the musical Sutcliffe!. Ultimately, however, he is bound to be remembered for this …

Anyway, Pierre Boulez turns 90 this week, so this is The London Column’s opportunity to offer the maestro a modest tribute. Your correspondent was a regular at Boulez’s concerts in London in the 80s and 90s; he represented a personal link to Stravinsky, Varese and the post-war avant-garde, and in today’s denuded cultural landscape it is hard to see who will ever replace him. Here is Yvonne Minton singing the Song of the Wood Dove from Boulez’s magnificent recording of Gurrelieder, the same one he was working on when Batt’s creature showed up. D.S.