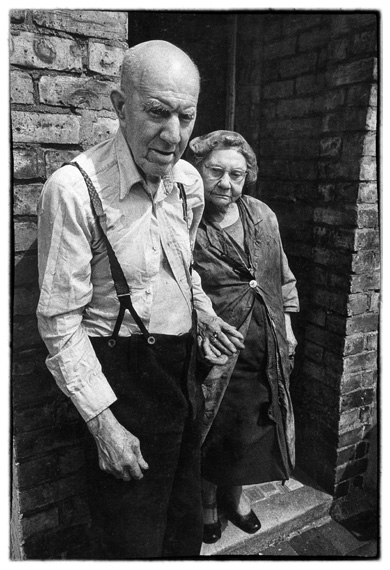 In the final of the series of Dave Hendley’s rediscovered 1970s photos, this image shows an elderly couple outside their house in Fulham; they were facing eviction from their home after living there for decades. That is as much as I can tell you about the facts of the picture; Dave doesn’t know what became of them or the house itself (if it wasn’t flattened for redevelopment, it is probably now one of those candy-coloured terraced houses that go for over a million pounds). I’d like to know the full story, but perhaps it’s as well I don’t. I imagine the outcome was shabby and depressing: the early 1970s was not a glorious era for social housing in London.

Dave’s photographs this week are fragments of a lost career, and these pictures only exist because he left some old prints at his mother’s house. I don’t know why Dave felt compelled to chuck his old negatives, but he was young when he did it and perhaps didn’t reckon on their value as a permanent record. Now that almost all photographs exist as pixellated images that never get preserved as hard copy, it is sobering to consider the implications for the future. Dave ditched his negatives and got old enough to regret it, but fine prints were (accidentally) preserved. Today’s toy-like cameras make images that are no more durable than an ice sculpture. Photography is becoming utterly ephemeral: you aren’t creating a graven image, you are generating a string of code. Then, a bit later, maybe you get short of space on a memory card so you ditch a few images you don’t think you’ll need, or you forget to back them up, or the hard drive they were on went down … you won’t recover those pictures in anyone’s attic, they are gone. The future is bright and shiny and cares not for the past. Even those of us still using film wince at the price of ‘traditional’ materials: posterity carries a premium. What did Uncle Bill look like again? 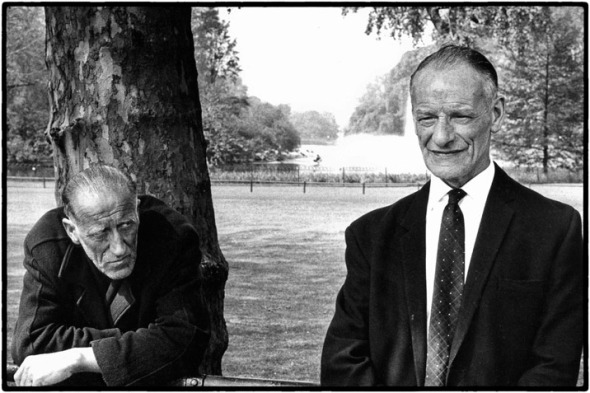 Photography is concerned with appearance rather than truth, and occasionally, one comes across a photograph so mysterious that one is stumped for any sort of comment. One thinks of the Andre Kertesz photo of a shadow behind glass on a balcony in Martinique; of Robert Frank’s picture of a girl running past a hearse and a street sweeper on a drab London street; or Elliott Erwitt’s shot of tourists in a Mexican charnel house, all acknowledged masterpieces. I think the above photo by Dave Hendley has a similar power. Dave offers no insight: he shot it quickly with his Leica as he walked past the men, then moved along before they had time to register that he had taken their photo (‘I was more ruthless back then, I don’t stick my camera in people’s faces any more’.) But it invites speculation, so I am going to offer mine.

There are few clues in Dave’s photo as to the exact period, but somehow we know it belongs to the past: in fact, it is the early 1970s – but it evokes a time slightly earlier than that.  I am reminded of the ‘black and white’ 1960s, the lost era of Victim, Pinter’s The Servant, and, especially, Joe Orton’s Entertaining Mister Sloane: a world of furtive encounters afforded a desperately genteel gloss (“the air round Twickenham was like wine”). But I don’t know whether my interpretation is correct and it probably isn’t. More than one photographer has got into trouble because a photo suggested something about its subjects that was misleading or even libellous. Whatever the reality, the picture is simultaneously comic, poignant and slightly disturbing. The sharply assessing gaze of the man on the left is unnerving enough, but I find myself worried by the man on the right, his too-tight tie and his inscrutable smile somehow just wrong. (I am also reminded of this painting.)

As with the photo we ran yesterday, this photograph is a precious survivor of a cull of Dave’s early work which the photographer carried out with youthful ruthlessness. That was many years ago and, needless to say, Dave now regrets this; fortunately, this image survived as a print which Dave recently discovered in his mum’s attic. 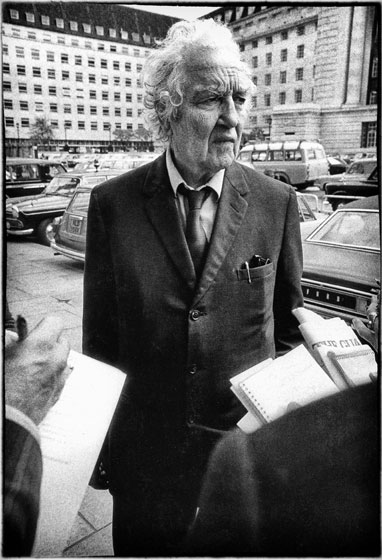 All aboard now, you children of Demeter,
sling up your canvas haversacks and bedding
on the roof-rack, load the plonk and bread in,
and scrunch into the battered Ford twelve seater.
Discard your wooly hats and your windcheaters;
the weather’s always sunny where we’re heading.
Sing, as if a festival or a wedding
were the destination. Fear won’t defeat us

on our way. Pass the carafe of sangria
as we speed on through the brilliant foothills
of the island. Love and wine make us brave
in face of our enemy, so that we are
exultant first, resigned, and lastly tranquil
on the minibus that bears us to our graves.

This week we feature some photos from Dave Hendley‘s 1970s archive; I say ‘archive’, but in fact the ones we are running were rescued from Dave’s mother’s attic, and are survivors of an ill-advised cull that Dave made of his work some decades ago. The photo above was taken for The Times; a photo call at an event to honour Graves, who looks massively uncomfortable – which is perhaps unsurprising, given that he hated to leave his beloved home in Deya, Mallorca for any reason whatsoever. 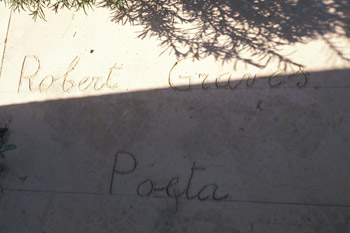 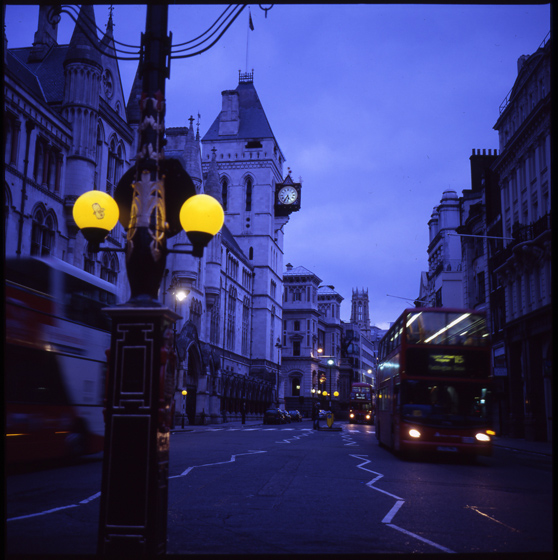 An attempt at Putting on a Brave Face

In A Visitor from Down Under by L.P. Hartley, which was published in a collection called The Ghost Book, edited by Walter de la Mare in 1932, we are on the top decl of an open-topped bus ‘making its last journey through the heart of London before turning in for the night’. The loquacious bus conductor encounters a silent, pale passenger with hat pulled down and collar up. ‘Jolly evening,’ says the conductor. (He is being ironic; it is wet and foggy.) There is no reply from the passenger, who holds up his fare between the fingers of stiff, apparently immobile fingers. The conductor takes the money and goes back downstairs. Later, the mysterious passenger is not there. The conductor never saw him come down the stairs, but he rationalises the situation with a very good example of sceptical wishful thinking: ‘He must have got off with that cup-tie crowd’. 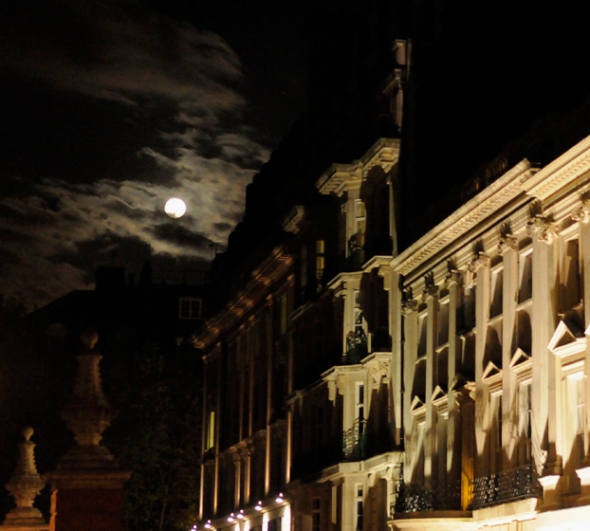 If ghost stories arise from the Gothic tradition, which was as much architectural as literary, it is also the case that persistent ghosts need a persistent location in which to manifest. So no wonder houses are haunted.

Haunted houses tend to be old and big. Such properties appeal to the romantic idea of faded grandeur, and also a baser snobbery. Every account of Borley Rectory, ‘the most haunted house in England’, describes it as hideous, but when I look at the pictures I wonder how much it would cost today if it were still standing, and whether the seller would take a low offer in view of its poltergeist infestation. Reading ghost stories we are torn: yes, a malevolent spirit stalks the east wing, but at least there’s am east wing for it to stalk. Ghost stories, both real and fictional, sometimes come with floor plans of the haunted area – literally, property particulars – and very mouth-watering they usually are.

Haunted houses also come with libraries, and with servants. The protagonist in a ghost story is quite alone in his huge house … except for his fifteen servants. The reader might not know about the servants until one of them hesitantly knocks and enters the master’s study on the final page and finds him slumped in his chair ‘With a look on his face, the like of which I’ve never seen …’

The author denigrates the house, but also slyly boosts it to engage our snobbery. In Walter de la Mare’s story, Out of the Deep (1923) the protagonist, Jimmie, inherits his uncle’s ‘horrible old London mansion’. But how horrible and old can a London mansion be? In Moonlight Sonata (1931) by Alexander Woolcott, one of the two principals inhabits ‘the collapsing family manor house to which he had indignantly fallen heir.’ The owner is down to his last gardener, who tends the ‘once sumptuous’ grounds, but the place doesn’t sound too bad to me.  The Mystery of the Semi-Detached by Edith Nesbitt (1893) seems, from its title, to be bucking the trend, but the house is ‘commodious’, with several sitting rooms.

I myself grew up in a semi-detached of a more modest sort. We were its first occupants, and I was proud of inhabiting a new house. Those of my contemporaries who lived in old houses seemed to me to be taking a considerable risk. They were living in houses in which people had died, and people they didn’t know at that – people that nobody currently alive knew. It must be like living in a tomb. There would have to be certain echoes. In grappling with the subject, in his collection of sightings, Apparitions and Haunted Houses, Sir Ernest Bennett plaintively wonders, ‘Can it conceivably be the case that in some inscrutable fashion the woodwork and masonry of a house may exert some physical or mental influences which cause certain individuals to see the phantasmal figure of a former resident?’

Elsewhere in his fine book (an overview of the British ghost story tradition), Andrew examines Charles Dickens’s fascination with ghosts and how they impacted on his fiction. The above photograph shows the Inigo Jones mansion – on the right – believed to have been the model for the chambers of Tulkinghorn, the sinister lawyer in Bleak House. Although Bleak House is not ostensibly a novel about ghosts, it deals with the dead hand of the past weighing upon the present; and Dickens’s treatment of Lincoln’s Inn is appropriately atmospheric, menacing and grotesque. Here is the opening of chapter 32:

‘It is night in Lincoln’s Inn — perplexed and troublous valley of the shadow of the law, where suitors generally find but little day — and fat candles are snuffed out in offices, and clerks have rattled down the crazy wooden stairs, and dispersed. The bell that rings at nine o’clock, has ceased its doleful clangour about nothing; the gates are shut; and the night-porter, a solemn warder with a mighty power of sleep, keeps guard in his lodge. [. . . ] It is a close night, though the damp cold is searching too; and there is a laggard mist a little way up in the air. It is a fine steaming night to turn the slaughter-houses, the unwholesome trades, the sewerage, bad water, and burial grounds to account, and give the Registrar of Deaths some extra business’.