At Home with Mrs John Profumo.

‘Mrs Profumo in the drawing-room with her white French faience hound.’ Uncredited photo from House and Garden, Conde Nast Publications, 1962.

From The House and Garden Book of Interiors, 1962:

Mr. and Mrs. Profumo (she is Valerie Hobson, the actress) live in a typical-looking Regent’s Park stuccoed villa, which has certain highly individual touches, the most covetable being a large garden and a magnificent drawing room.

An improbably large area of the house is given over to the drawing room, which must be one of the largest rooms in London to be found in a house of comparatively modest size. With its double-cube proportions, three fine windows, opening on to the garden, and gaily disciplined Nash decorations, this is a perfect room for a couple who must, perforce, engage in a great deal of entertaining.

A quick glance into Mr. Profumo’s own study provokes the wish that more masculine, magisterial ministerial rooms were half so attractive!  Needless to say, the desk is large and if you look carefully you will see a highly decorative as well as highly confidential red ministerial despatch box on it, doubtless often impelling the owner of this charming house away from the family circle to the chores inseparable from high office.

From John Profumo’s statement in the House of Commons, 22nd March, 1963:

“My wife and I first met Miss Keeler at a house party in July 1961 at Cliveden. … Between July and December 1961, I met Miss Keeler on about half-a-dozen occasions at Dr Ward’s flat, when I called to see him and his friends. Miss Keeler and I were on friendly terms. There was no impropriety whatsoever in my acquaintanceship with Miss Keeler. … I shall not hesitate to issue writs for libel and slander if scandalous allegations are made or repeated outside the House.”

From Confessions of Christine, Christine Keeler,  News of the World, June 1963:

Our meetings were very discreet. Jack [Profumo] drove a little red mini car. … If we were not in the flat, then we would just drive and drive for hours. Of course, it was impossible that our discretion would be absolutely complete. There was that amazing evening when Jack was round, and an army colonel showed up suddenly looking for Stephen [Ward]. The colonel couldn’t believe it. Jack nearly died. The funny thing is I never used to think of Jack as a Minister. I can not bow down to a man who has just got money or a position. And I liked Jack as a MAN.

The passage of time has rendered the uncredited House and Garden text as poignant as it is comic. The gushing prose is at odds with the attitude of Valerie Hobson in the picture, lost amidst the chilly perfection of her vast drawing-room. Her husband, despite his vivid presence in the editorial copy, fails to appear in any of the pictures of the interior of their Regency villa, presumably due to the demands of the business of state – or, as implied by Christine Keeler’s racy memoir, some other kind of business.

This issue of House and Garden appeared in 1962, not long before Profumo’s mendacious statement to Parliament, which left a host of hostages to fortune, eventually leading – as everyone knows – to his resignation as Secretary of State for War. Today, politicians have ample opportunities to reinvent themselves after a career-ending debacle: Neil Hamilton, Jonathan Aitken and even Jeffrey Archer have achieved a degree of rehabilitation and it seems likely that Chris Huhne and Vicky Pryce will eventually re-enter ‘public life’ in some form or other. As the pioneer of modern political scandal, John Profumo had no such option: instead, he chose a practically Roman form of self-abasement, cleaning the toilets at Toynbee Hall in Whitechapel (a task he continued to do until the management suggested that there might be better ways of using his skills). He did, eventually, gain a limited re-admittance into high society but even that took him decades.

What of Mrs Profumo? As Valerie Hobson, she had been one of the most popular actresses in Britain, best remembered now for her role as the grown-up Estella in David Lean’s 1946 version of Great Expectations and as one of Dennis Price’s conquests in Kind Hearts and Coronets. Trophy wives don’t come any classier, and she was the perfect accessory for a PM-in-waiting. Pre-scandal press photos show a glamorous, high spirited couple; the tone of the House and Garden copy echoes those images, which have an air of genuine happiness about them. The photo of her ‘at home’ could not offer a greater contrast; if we didn’t know who she was, or what her circumstances were, we would still see this picture as a study in melancholy. It is tempting to speculate that she had already guessed the role she was ultimately destined to play. She had gone from being a screen star to an ambitious politician’s wife, and finally the embodiment of dignified suffering: a mute witness, as still and silent as her ‘white French faience hound’.

This Grade I-listed property at prestigious Chester Terrace overlooking Regent’s Park, was once the home of shamed politician John Profumo, who lived in the splendid stucco townhouse during his much-publicised affair with model Christine Keeler in the Sixties. The scandal forced his resignation as secretary of state for war and damaged the reputation of Harold Macmillan’s government. Designed by John Nash, the architect responsible for much of Regency London, the elegant, four-bedroom house now has a cinema room, wine cellar and enchanting garden. If only walls could talk… Call [estate agent] if you have £10.95 million.

A Personal History of Indian Cuisine. 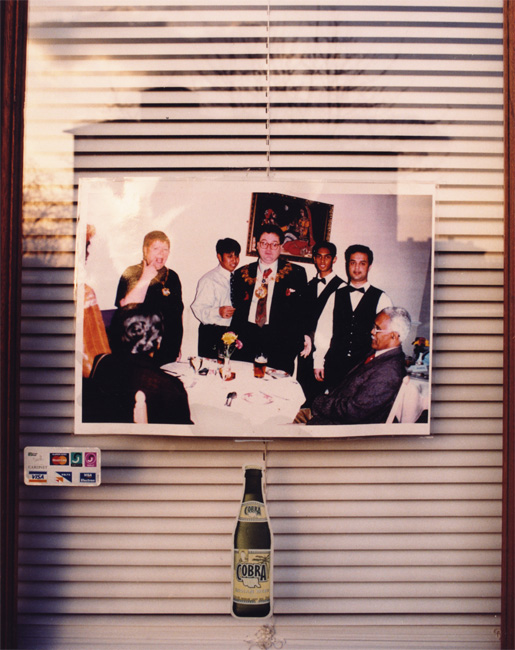 It is 1975, I am 13 and, like most white British people of my generation, my experience of Indian food is limited to a small, local curry house. Remote, distant Cheam in the remote, distant 1970s offered few opportunities for culinary experiment and a trip to an Indian offered the prospect of an exotic night out. Visits to The Partition of India – or whatever it was called – were made in the company of my two elder siblings; I was taken there with some ceremony by my sister and no ceremony at all by my brother. (I was never taken there by my parents, who were not attracted by its charms.)

The suburban Indian restaurant is one of the cultural phenomena of post-war British life, signifying social change, and a broadening of the scope of what is considered our national cuisine. But the 1970s offers very few excuses for Proustian reverie; even as a teenager I was aware that my local Indian didn’t cut it, as the food was barely adequate and served by staff who seemed either torpid or desperate. I also knew that part of its appeal was its very inability to deliver the experience you were looking for; it confirmed my adolescent conviction that the suburbs were a pale shadow of the real, yet-to-be-discovered world. (Incidentally, the restaurant in question appeared to be popular with adulterers. This was my brother’s theory, and we would giggle at furtive couples in corner booths, whispering as best they could over the sitar tape whilst poking at bits of Bombay Duck. Adulterous or not, these couples were also seeking a dining experience that was clearly not forthcoming.)

By the early 1980s I had arrived in the flesh pots of south London; just a few miles away from provincial Cheam, yet Wandsworth, Clapham and Tooting were home to tempting, ‘authentic’ Indian restaurants which delighted in their specific regionality – Nepalese, Goan, Bengali. Fabled establishments like The Concert for Bangladesh, Midnight’s Children, and Sherpa Tenzing offered dishes worlds away from the generic beige goo I knew from my sheltered youth. But you could still get caught out: during a meal at an unfamiliar establishment in Battersea, circa 1985, an ordinary-looking lamb passanda arrived at my table and, before anyone could say anything, the waiter produced a can of UHT whipped cream and sprayed foam all over it. It was a brilliant comic gesture, but it was supposed to be my dinner. Despite such misadventures, my local dining preference remained the curry house; I bypassed Nouvelle Cuisine and other foodie trends and stayed true to my suburban roots.

The ubiquity of Indian restaurants has generated an urban mythology particular to them. A sudden closure was darkly ascribed to the discovery of a skinned dog in the kitchen. Tales were told of a legendary establishment which offered a Chicken Bastard, a dish so hot that it was not intended to be eaten. ‘Witnesses’ spoke of an unwise party who took the challenge, goading the waiters who brought him his order, forcing it down with Carlsberg as kitchen staff emerged to watch, and of the ambulance that was summoned to take him to A&E. Such stories were clear evidence of cultural antagonism, but my own favourite tall tale is actually quite sweet, and is very possibly true. I knew a pair of Egyptian brothers who were my schoolmates at a boarding school on the outer fringes of London. It was said that at the end of term, they went into Leatherhead, ordered three dinners from the Siege of Delhi, packed them in their luggage (did they order poppadoms?), got a cab to Heathrow, flew to Cairo, and consumed the congealing banquet with their father as a festive, homecoming dinner: the ultimate Indian takeaway.

After decades of enjoying Indian food in almost every postcode within the M25, my love affair with it ended in a way my brother might have predicted. I became romantically involved with someone who remained very slightly married, and our lunchtime venue was a classy Indian in St James’s. The Cawnpore Massacre is one of London’s best restaurants, but its convenience for my beloved made it a kind of hell for me. As the months dragged on, I became all too familiar with the delicacies on offer, and the wonders of its kitchen paled against the looming inevitability of my defeat. To paraphrase Robert Shaw in Jaws, ‘I’ll never order Rhogan Josh again’. 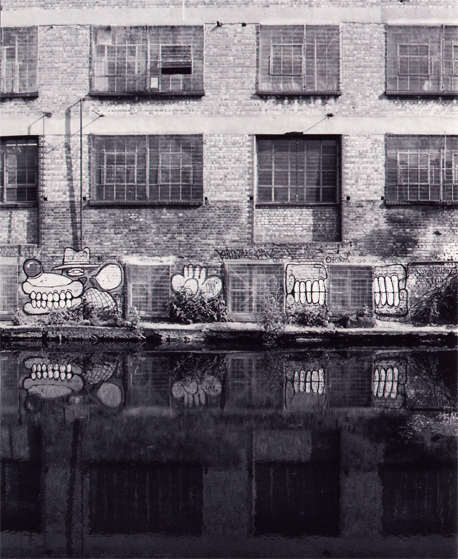 According to an account by Olly Beck, Sweet Toof looked at himself in a looking glass “in crisis after a messy break-up”, with the enlarged and distorted imagery of the “crescents of teeth”, the “visible part of our skeletal frame” as a reminder of mortality. Beck relates Sweet Toof’s concerns and imagery with the 16th Century Northern European “Vanitas” tradition of reminding of the transience and vanity of life, and to the Mexican celebration of skull imagery to accepting, honouring and celebrating death as part of the life trip.

Sweet Toof’s own comments seem to uphold this interpretation, in which the artist comments, “To get one’s teeth into things, before it’s too late.” Elsewhere he notes, “Teeth can be really sexy, or aggressive, but they’re also constant reminders of death. They’re how we get recognised by police when there’s nothing else left.”

After the Gasometers by Katy Evans-Bush

If those were crowns, the kings
must have stretched out underground
from Regents Canal to Stepney Green.
At that size, they were gods. But no,
the earth was level: a thick eiderdown
of chemicals and dirt, beneath the play
of air on iron filigree, the orange light
that danced at sunset through the rings.