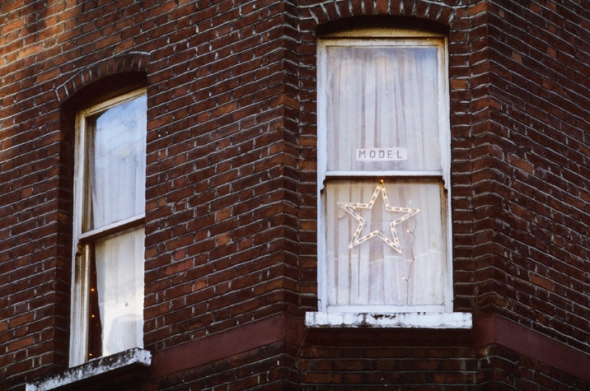 From Act Two of The Homecoming, Harold Pinter, 1965:

MAX: You mean put her on the game?

We’ll put her on the game. That’s a stroke of genius, that’s a marvellous idea. You mean she can earn the money herself – on her back?

MAX: Wonderful. The only thing is, it’ll have to be short hours. We don’t want her out of the house all night.

LENNY: I can limit the hours.

MAX: (dubiously) Is that enough?

LENNY: She’ll bring in a good sum for four hours a night.

MAX: Well, you should know. After all, it’s true, the last thing we want to do is to wear the girl out. She’s going to have her obligations this end as well. Where you going to put her in Greek Street?

LENNY: It doesn’t have to be right in Greek Street, Dad. I’ve got a number of flats all around that area.

MAX: You have? Well, what about me? Why don’t you give me one?

… and a Merry Christmas to all our readers.

An otherworldly darkness permeates Jaschinski’s work, a troubling philosophical depth that touches both the animal inside the frame and the human spectator who is outside looking at the creature. A sense of uncertainty resonates in her photography—uncertainty about the animal’s context, the animal’s sentience, the animal’s feelings.  This sense of the unknown challenges the human audience’s habitual expectations of omniscient insight with regard to other animals.

I believe that it is wrong for us to see the monkey in the way we are seeing it, in a zoo, or even in a photograph from a zoo, and yet it is at the same time mesmerizing. Is this lar gibbon as fascinated by his spectators as we are of him? What does he think of us? We cannot know. The energy that Jaschinski’s image conveys is at the same time profound and profane. The longer we regard this gibbon, if we learn anything, it is how much we cannot know.

Our relationship with non-human animals is rich, intricate, and troubled.  People are fascinated by animals, and respond to them in ways that are at times full of homage and awe, and at other times oppressive and perverse.  We are prone to appreciate, or to fetishize, animals in isolation as discretely framed specimens (in a zoo, or as a pet, or a meal, or a toy) distanced from their groups, alienated from their contexts.  But still they are there, all around us.

What is wrong here?  What is missing?  Where is the viewer situated in relation to the subject? What is the connection between imagining and exploiting animals? What has the photographic aesthetic done – and what have we done – to capture, and to betray, these creatures? What are these animals doing as we look at the sliver of their existence that is frozen and framed in the moment of each photograph? What kinds of movements, instinctual urges, behavioral patterns are suggested in the picture?  And more to the point, what sorts of movements, instincts, and behaviors are suppressed in these images?  A large “negative text” pervades Jaschinski’s photography.  We are asked to see many things – habitat, activities – that are not there; we are confronted with their absence.

Zoos are obviously bad for animals, cruel to animals, but beyond that, they’re bad places for people to learn how we relate to the other creatures with whom we share the planet.  Zoos are a case study of people’s environmental short-sightedness. After and beyond the experience of zoogoing, people behave like imperious emperors toward the rest of the world, overconsuming, unsustainably harvesting plants, animals, minerals, oil, land, and yet remaining in denial about our impact on the planet.  Our disregard for animals, our displacement of them, betokens a larger environmental hubris, or blindness.  Zoos promote sloppy, imperial animal-looking and animal-thinking, which generates a sloppy, self-serving, inauthentic environmental sensibility.  To confront overarching questions about how people construct and interact with “the environment,” a consideration of zoos offers a good ingress. The cultural history of the zoo is a history of human assaults upon other animals, and upon the rest of nature.  Zoogoing is a model of imperial exploitation of the natural world.

Zoos exist because people want to make animals conveniently accessible and visible, but there is nothing convenient about wild animals.  They are complicated, enigmatic, entropic.  Jaschinski’s photography embraces this complexity, and subverts our urge to simplify and reduce their lives.

Zoo animals are removed from their own contexts, their own habitats, and resituated in a context that makes it more convenient for spectators to see them.  The disjunction between where an elephant really lives and this Regent’s Park pied-a-terre is surreal.  Zookeepers tell their audiences that the point of zoos is for people to establish connections with other animals, and to inculcate a sense of ecological awareness as human expansion threatens animal habitats.  But paradoxically – perversely – the zoo features animals divorced from their world.

The elephant people see in the zoo is not a “real” elephant.  The real elephant lives in her place, in her habitat, in her environment, among and alongside many other animals of her own species, as well as many animals of other species, predators and prey, friends and strangers.  She lives there because her lifecycle is predicated upon a certain seasonal climate, a certain range of movement, an environment comprised of certain plants, trees, water, dirt, stones, topography, and so forth.  It is fundamentally impossible for zoos to reproduce any significant amount of this animal’s habitat.

As people expressed feeling of guilt about seeing caged animals in prison, some zoos began to modify the enclosures, largely to alleviate the spectator’s discomfort.  Perhaps the designers who created this brutalist elephant compound thought that the “brutes” inhabiting it would feel at home here. But the zoo’s architectural spectacles do not alter the fact that the constrained animal on display lacks most aspects of the environment in which he or she naturally lives.  Zoo-goers cannot see an elephant who acts or feeds or sleeps or eats or mates or nurtures or fights in the way a real elephant would.  Depressive, anxious, and fearful behaviour – learned helplessness, self-injury, stereotypic repetition — is rampant among captive animals on display.