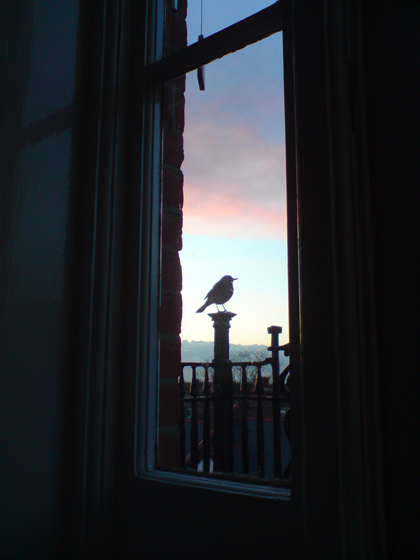 The London Column has been a little inactive this month, partially delinquency on the part of your correspondent and partially a feeling that the London Olympics had taken all the air out of the city; small, mordant observations about life in the ‘Great Wen’ seemed out of place in the midst of such frantic flag-waving. But, Paralympics notwithstanding, there is that ‘back to school’ feeling in the air: autumn is nearly upon us, the flags and bunting will fade and get wet, and it will soon be business as usual.

There’s only so much jubilation a city can stand … 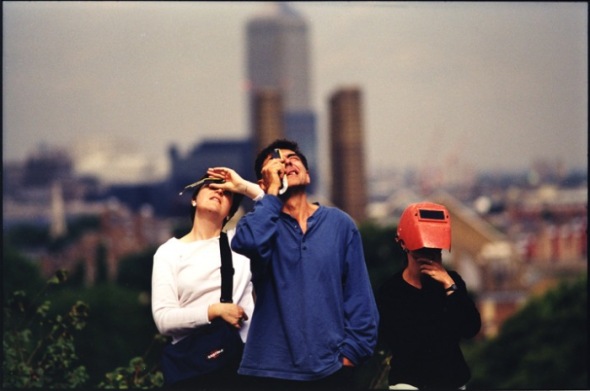 In Hackney, Mare Street was as busy as on any normal weekday. People were shuffling about with plastic carrier bags or talking on their phones, seemingly oblivious to the fact that the sun was about to be eclipsed. We were rushing to get our errands done in time to get to the park for the main event, the kids equipped with arcane little things they could look through that they’d been given at school two weeks before.

The first glimmer of what was coming was a strange, translucent-but-heavy quality to the air, as if it were turning into some kind of gel. It felt suddenly harder to move through it. Then the light began to go a bit greenish. Everything slowed down. When we got into London Fields, the park was thronged with people on the grass, some with picnics, and the weird green heaviness in the air intensified; it was like being in a fishbowl.

At the height of the eclipse, the park and the pub and all the people were as if viewed through a thick glass coffee table. It was very strange. But the utter incongruity of the street scene – lorries and buses seeming to wend their way painfully through unfamiliar, viscous air – was never matched once we were in the park. 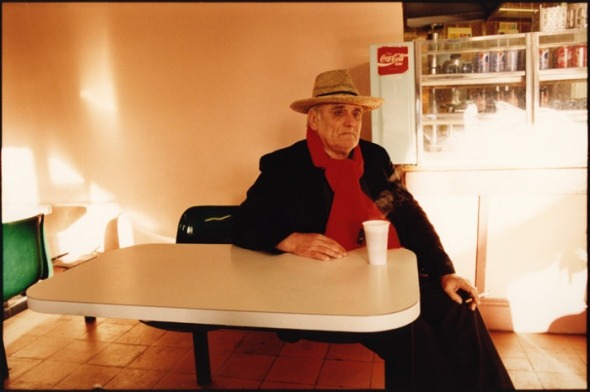 The years after WW2 heralded a new spirit of optimism and national confidence in Britain. Consumer culture became king and as a symbol of this progress and prosperity a new Contemporary style dominated architecture and design through the 50s and into the 60s. This was a fresh style moving on from the minimalist rigours of the Modernist movement. It represented a new vibrancy with materials like Formica, leatherette chrome and plastic coming to the fore. The ‘streamlining’ cult was especially evident in kitchen interiors and the functional spaces of cafes.

The positivity of an age created new tastes and trends, with the cafe’s Italian styling a ubiquitous cheery symbol of national regeneration and outward lookingness. But today you have to look harder than ever to find decent, intact cafes with classic Formica tables, lino floors, proper seats and small cabinets of biscuits and crusty rolls. Cafe family owners are nearing retirement age and the children don’t want to take over the business. Also many leases are coming to an end for the central London cafes and the resale value of cafe buildings in the property boom is too vast to ignore. Too many have been replaced and refitted with ghastly plastic moulded interiors devoid of atmosphere.

The cafe on Windmill Drive, on the southern side of Clapham Common, was a nice example of the sort of cheerful yet lightly-modernist eaterie so fondly described by Classic Cafes: such establishments are a throwback to a simpler time and are now as rare and threatened as the Edwardian dining rooms the cafes often replaced. This particular cafe attracted a splendid diversity of characters and had its own particular eco-system, by virtue of its location in the middle of the Common. I find myself using the past tense when describing it, as it is many years since I last visited – and a year is a long time in London. The gentleman in the photo above, who posed so gracefully for my camera, had been a Sunday morning regular for many years – but I don’t know whether I’d find him or the Formica in situ today, and I don’t want to go there to find out. I fear to return for what I might find.

Was the UFO that appeared over the London Olympics opening ceremony on Friday night a blimp or a helicopter? In an enhanced video released by Alien Disclosure Group UK, the UFO does not appear to be either of those things. In fact, the enhanced video shows an anomalous object flying above the opening night fireworks that resembles a flying saucer.

The object appears to be flat and disc-shaped with a protrusion in the center. It is clearly not a blimp or a helicopter, so what is it? We may never know for sure, but some people may stand to make money off the UFO‘s appearance. Prior to the London Olympics opening night ceremony, some London betting houses were taking bets on whether a UFO would be seen that night.

Alien Disclosure Group UK is always an excellent source of amazing UFO videos and information. This may be the most fascinating video that they have disseminated online. ADGUK credits MrScipher for the discovery and notes that this is a confirmed UFO sighting unless proven otherwise to be a blimp, a drone or other known object.