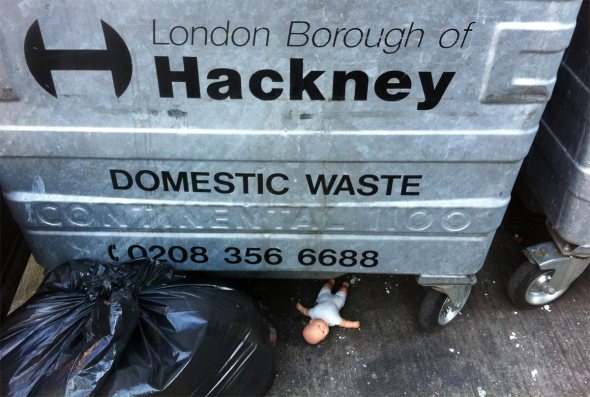 * The above photo and the following text were found on the top deck of a 243 bus travelling through Dalston. The top of the A4 sheet was torn and the artist’s name was missing.

I make images because I am driven to commit a feeling to something visual. My work is endowed with a narrative quality. Through a personally charged perception I explore a range of issues relating to the formlessness of both individual and social reality. This evolves from a close reading of discourse and neuroses surrounding the condition of human existence. I translate the incoherence of lived experience into elements accomplished by a distortion of what is known. The real thus becomes charged with imagined specificity. By describing the world as I imagine, perceive and exist within it, this element of personal mirroring may also act as a reflective process for the viewer.

This is my father driving in the 1940s, before I was born.

He left school at fourteen to work in an iron foundry his own father had helped establish; he eventually became joint managing director. We had a comfortable life without my mother having to work; single-income households were common then. He liked cars: I remember waiting at the front-room window one afternoon, when I was four or five years old, to see him arrive home in a brand-new olive-green Riley. Fifty years on from pressing my face against that window, I know that at no time has my own income been sufficient to raise a family in similar comfort, nor will I ever own a brand-new car; and my children will, if they go to college, be already mired in debt before they even begin to earn their own money.

The ignorance of the experts concerning the financial  products they were using our money to buy is hardly new. James Buchan, in the late 1980s: ‘In London and New York I met people who invested fortunes in financial enterprises they simply could not describe or explain. No doubt quite soon, a bank would discover it had lost its capital in those obscure speculations; other banks would fail in sympathy . . .’ The politicians were even more ignorant. It’s as if for years we’ve been going with our tummy-aches to doctors who can’t tell the difference between a blister and a cancerous tumour. No wonder we’re ill.

The derivatives market conjured into existence in the 1990s was a virtual world, enabling speculation not in real assets but in the risk of speculation itself. It is addictive: the rush, the buzz, the winning streak. The opposite of which is the losing nose-dive – lose your job and you’re well on your way to losing your (real) house, marriage, health and dog.

An investment banker, quoted in the Standard: ‘In most cases they know their wives despise them for enslaving their lives to money, and they know that the moment they lose their job their wives will walk and take the kids, and their £3 million home, and divorce them.’ A lonely-hearts ad, placed on a literary website at the time the axe started to chop: ‘Ex-banker, 33 . . . Seeking woman not interested in money, fast cars, champagne, holidays, fleecing innocent hard-working gullible twats, whilst telling them you love them. Bitch.’ 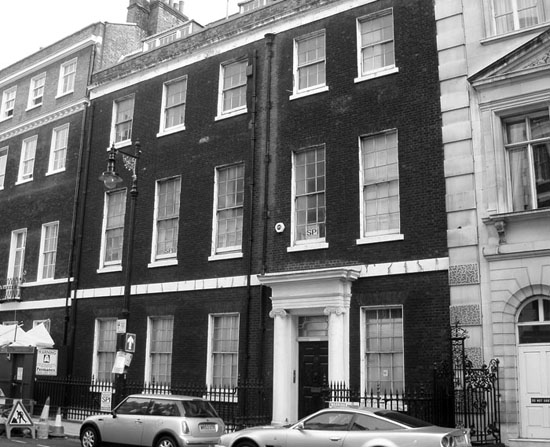 The above house in Mayfair, London, was squatted in January 2009 by a group that offered free workshops on welding, yurt-building, bookbinding, song-writing and de-schooling society. Hundreds of buildings are squatted; what made the press interested in this one was the stark disparity between the poshness of the building (alleged to be worth £22.5 million) and the presumed poverty of the squatters.

Bookbinding and yurt-building won’t change the world for the better overnight, but nor will sending out 400,000 repossession orders (Centre for Policy Studies estimate, February 2009) to households that have lost jobs and can’t keep up the mortgage payments. 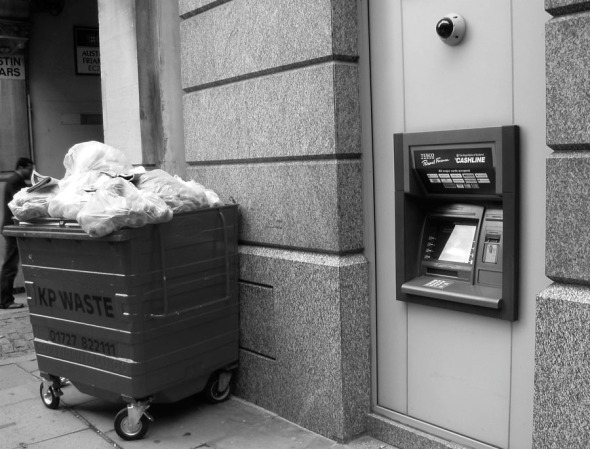 I had a dream in which I punched the keys to withdraw money from a cash machine and it paid out in cowrie shells, rattling down a metal chute into the canvas bag I’d thoughtfully brought with me. As I walked to the supermarket the shells clacked satisfyingly in the bag by my side – I felt rich, rich. And then I woke up and went to my real bank and there was nothing there for me at all, they’d completely run out of money. Not a bean.

Ou sont les magasins d’antan? As well as the big ones, the small ones too. The place at the end of the road where I used to get my shoes re-heeled – where did that go? The café with over-priced food but a garden at the back where I could smoke? The minicab office in the next street? With the deadpan Somali driver who’d stop the car and get out and look up at the sky: he said he navigated by the stars, and I never knew whether he was taking the piss. Even with no office to return to, I hope that somewhere he’s still driving. There are very few recession-proof businesses; here is one of them.

The intensive factory farming of money makes it prone to many diseases, some of which can be transmitted to humans. There are government regulations concerning the application of biotechnology to the breeding of money, and there are also ways around them.In the last fifty years that part of the human brain dedicated to devising ways of getting money away from others and into your own hands has increased in size by 4 per cent.

Behind this door – which is in a yard in the City of London – is the secret meeting place of a group of underground bankers. (There’s no external handle; you have to whisper the password through the grille on the right.) This group is deeply suspect: they buy books and music, not yachts and ski chalets, and their vocabulary extends beyond that of company reports. They are regarded by the rest of the banking world as heretics – because the whole point of being a banker is to speak in clichés, to have a single-track mind, to buy only the most predictable goods: that way they remain anonymous, almost invisible, and are left alone to get on with their thing.

God is dead (so can’t bail us out). Or couldn’t afford the heating bills for a place this big, or had had it up to here with the regular early-hours racket outside the lap-dancing club at the end of the street. Whatever the reason, he’s gone. But he left no forwarding address, so the mail just keeps piling up inside the door.