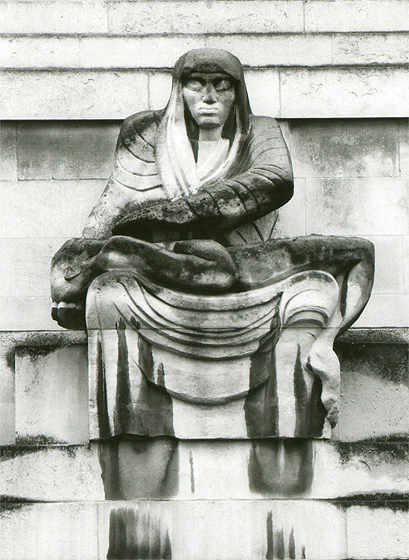 55 Broadway was built in the late 1920s to house the headquarters of the Underground Electric Railways of London, which later became London Underground. Fittingly, the edifice looms above St. James’s Park tube station, and the shopping mall at ticket hall level still contains much delightful Deco detailing. The building was designed by Charles Holden, who also designed the University of London’s Senate House in Bloomsbury. The building is further distinguished by the presence of sculptures and reliefs commissioned from some of Britain’s leading sculptors of the time, including the ‘big three’: Eric Gill, Henry Moore and Jacob Epstein.

Epstein carved his two contributions – Day and Night – directly into the Portland stone of no. 55. Predictably, Epstein’s brand of modernism went down badly and the male nudity of Day proved particularly controversial. There was a typically British outcry in the popular press, and Frank Pick,  head of the Underground at the time, resigned over the affair. Epstein was eventually forced to shorten a penis on one of his figures by one and a half inches, but the furore impacted badly on his career, commissions being in short supply throughout the 1930s.