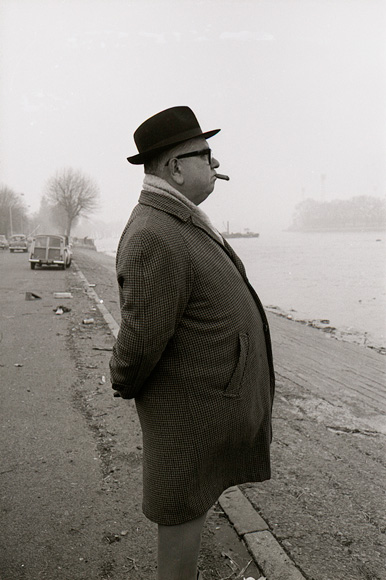 This chap is, to my jaundiced mind, committing the error of smoking outside at a time in history when he could have been smoking inside, so he seems to me complacent, lacking in foresight. I think it was Freud, who said that oral satisfaction of smoking comes from blowing a concentrated stream of smoke, and you can’t do that out of doors, as I know because I am forced to smoke most of my half dozen weekly cigars out of doors, ideally on a fine day in Green Park, where the price of the deckchair adds £1.50 to the cost of my cheap (‘inexpensive’, my tobacconist calls them) Honduran cigars.

My tobacconist is James J. Fox in St James’s Street, one of – I think – half a dozen left in central London, where twenty years ago there were forty. I once asked the man who serves me at Fox when the shop was founded, ‘1730,’ he said, with great trenchancy, but the shop was called Carlin in those days, and sold mainly snuff. It was called Robert Lewis from 1787 to 1991, when Fox moved there from Burlington Arcade. ‘Did you ever supply Churchill?’ I asked my man. ‘Sole supplier, sir, sole supplier.’

To think that in Churchill’s London you could smoke cigars in pubs, restaurants, on Tube trains, in Tube stations. When the subterranean Cabinet War Rooms were being fixed up early in the War, Churchill repaired to the safety of the disused Down Street Tube station, which had been taken over by the Railway Executive. He smoked cigars there, and it was said the fumes from them – and from his rich food and brandy – floated along the tunnel to the shelterers at Green Park station, and tormented them.

The only place I now smoke an indoor cigar in London, is in the upper room at Fox, where it is allowed providing you are sampling one to buy a larger amount, or providing you say that’s what you say you’re doing.  I listen to a lot of plutocrats in there, as they drink coffee and smoke fifty quid double coronas. (Double coronaries, more like). The other day, one of the millionaires was Australian, and he was saying you can’t smoke outdoors in many places in his country. So I shouldn’t moan really.

… for The London Column. Andrew Martin’s book, Underground, Overground – A Passenger’s History of the Tube is published by Profile Books in May 2012.