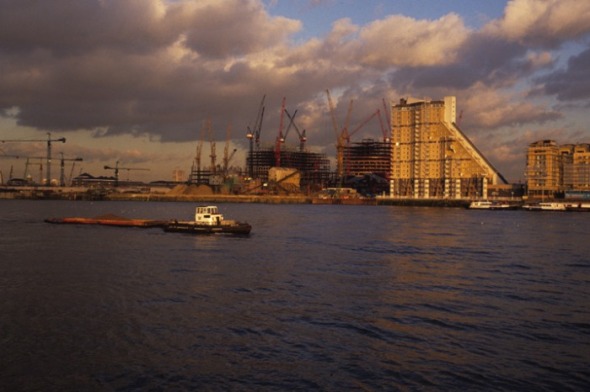 From  Without the City Wall, Hector Bolitho and Derek Peel, 1952:

No part of London endured more bombing during the Second World War than the Isle of Dogs. Anyone who has flown over the Thames at night will recall how the river makes a splendid curve here, and how the moonlight shining on the slow oily waters turns the peninsula into a perfect target. The German bombers came to know it well, and the dock and warehouses suffered night after night. The rebuilding has covered many of the scars, but also many of the old romantic streets …”

The photo above – taken for a magazine assignment to illustrate the growth of London’s Docklands – gives a small indication of the speculative building frenzy which characterised the mid-1980s. The building on the right in the photo above, newly constructed when this picture was taken, is Cascades, designed by Piers Gough for CZWG architects. Cascades was the first private apartment block to be built on the Isle of Dogs – a trailblazer for all the other developments of ‘executive homes’ (marginalising the ‘indigenous’ population, naturally) which – despite the occasional market wobble – have followed in its wake. Elsewhere on the Isle of Dogs at the time of this image, the massive foundations of Olympia and York’s Canary Wharf were being laid; gradually, the ethereal, silver profile of 1 Canada Square (the “tallest habitable building in Britain” according to Wikipedia) rose into the sky, elegantly dominating the landscape for miles around – until it was crowded by a cluster of far more vulgar towers belonging to big, bad corporations like Barclays and HSBC. If anyone wants to look for physical manifestations of the arrogance of capitalism, the Isle of Dogs has to be London’s most conspicuous example.