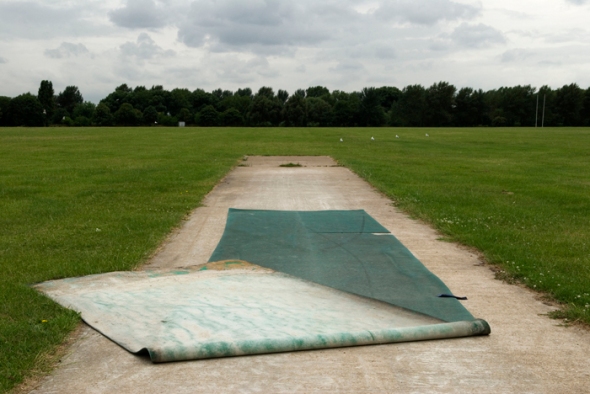 There’s a breathless hush in the Close to-night
Ten to make and the match to win
A bumping pitch and a blinding light,
An hour to play and the last man in.
And it’s not for the sake of a ribboned coat,
Or the selfish hope of a season’s fame,
But his Captain’s hand on his shoulder smote
‘Play up! play up! and play the game!’

The sand of the desert is sodden red,
Red with the wreck of a square that broke;
The Gatling’s jammed and the Colonel dead,
And the regiment blind with dust and smoke.
The river of death has brimmed his banks,
And England’s far, and Honour a name,
But the voice of a schoolboy rallies the ranks:
‘Play up! play up! and play the game!’

This is the word that year by year,
While in her place the School is set,
Every one of her sons must hear,
And none that hears it dare forget.
This they all with a joyful mind
Bear through life like a torch in flame,
And falling fling to the host behind
‘Play up! play up! and play the game!’

Henry Newbolt was a popular poet of the late Victorian and Edwardian era, and this once popular poem, with its image of sacrificial glory transferring seamlessly from the cloisters of Clifton College to the Sudan desert, was much reviled after the first World War. In his later years, Newbolt himself became embarrassed by it, but there is no question that in his prime he was the figurehead of nationalistic poetry in England. Its inclusion here was suggested by a poet friend, and she might have invoked it as a bilious response to the current move to incorporate ‘poetry installations’ into the Olympic theme park. Or maybe she was just in an elegiac mood.

Homer Sykes will be presenting a slideshow of images from Before the Blue Wall at the Green Lens Gallery, 4a Atterbury Road, London N4 1SF tonight – Wednesday 11 July – between 6 and 9 pm. Homer’s website is here.