From Scoop by Evelyn Waugh:

The bells of St.Bride’s chimed unheard in the customary afternoon din of the Megalopolitan Building. The country edition had gone to bed; below traffic level, in grotto-blue light, leagues of paper ran noisily through the machines; overhead, where floor upon floor rose from the dusk of the streets to the clear air of day, ground-glass doors opened and shut; on a hundred lines reporters talked at cross purposes; sub-editors busied themselves with their humdrum task of reducing to blank nonsense the sheaves of misinformation which whistling urchins piled before them; beside a hundred typewriters soggy biscuits lay in a hundred tepid saucers. At the hub and still centre of all this animation, Lord Copper sat alone in splendid tranquility. His massive head, empty of thought, rested in sculptural fashion upon his left fist. He began to draw a little cow on his writing pad.

David Secombe: Scoop was published in 1938 and is, of course, a literary monument to the glory days of inter-war Fleet Street, drawing on Waugh’s brief 1935 stint as a Daily Mail war correspondent in Abyssinia.  The novel’s monstrous Lord Copper is usually described as being an admixture of the proprietor of the Daily Express, Lord Beaverbrook, and The Times’s Lord Northcliffe, with the Mail‘s Lord Rothermere somewhere in the mix as well.  The immense power of these men reflected the vast circulations and influence of the titles at their disposal; and, for all its comic genius, the paragraph from Waugh’s novel speaks of the glamour and excitement of old Fleet Street.

The Telegraph Building, designed by Elcock & Sutcliffe and finished in 1928, is a fine example of serious-minded Deco, with sculptural detailing typical of the era’s public buildings (e.g. London Underground’s 55 Broadway, BBC’s Broadcasting House), whilst the clock and detailing of the facade speaks of the 1920s’ infatuation with all things Egyptian. Alfred Oakley’s dynamic frieze above the main entrance depicts a brace of Mercuries flying from Britain to despatch news to her dominions and beyond; whilst, at the very top of the facade, two gravely portentous sculptural masks by Samuel Rabinovitch – ‘Past’ and ‘Future’ – offer further proof of the self-importance of the parties who commissioned the building.  (However, Oakley and Rabinovitch were not as celebrated as Gill or Epstein, and their work on the Telegraph building was the high-water mark for both of them.) Together the elements add up to a rich, imposing and endearingly absurd edifice, entirely suitable for a sober, venerable newspaper keen to project an engagement with the hectic modern ‘scene’. 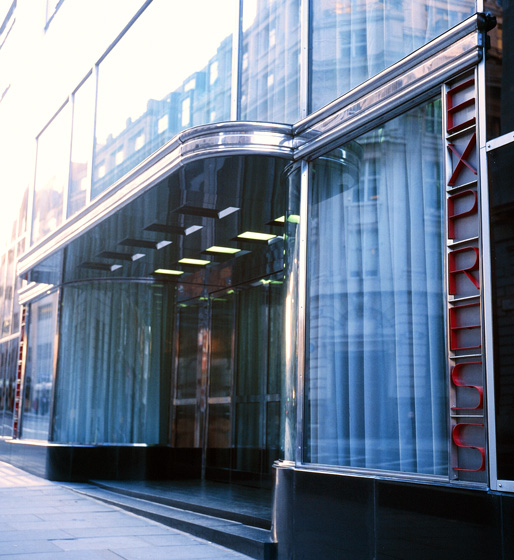 A few years later, in 1932, and just four doors away, the new Daily Express Building opened for business and immediately made Elcock & Sutcliffe’s Telegraph design look like something by Augustus Pugin. A self-proclaimed icon of modernity streamlining down inky old Fleet Street, this sleek edifice is as characteristic of the 1930s as the suddenly obsolete Telegraph Building was of the 1920s. Significantly, the building was to a large extent the design of a structural engineer, Owen Williams, who had also advised on the Telegraph Building, and who went on to design Express offices in Manchester and Glasgow in the same fashion as their London prototype. The stark finish common to all three Express buildings  – an aggressively moderne melange of black Vitrolite, glass and chrome – may be seen as an expression of the thrusting personality of Beaverbrook: the self-parodic press baron whose considerable political influence derived from the conspicuous popularity of his titles (during its post war zenith, The Daily Express was the biggest-selling newspaper in the world). Reading Scoop, it seems clear that Lord Copper’s Daily Beast is based in a building more like the Express than the Telegraph; quite apart from the architectural stylings, St Bride’s church stands directly opposite the Express Building, its spire reflecting darkly in the inscrutable facade of its upstart neighbour (however much Evelyn Waugh deplored the architecture of his time, he relished its capacity for inadvertent comedy).

Both the Telegraph and Express buildings are now owned by Goldman Sachs, their fabled Deco interiors available for inspection only on rare open days. And ‘The Street of Shame’ remains a street of ghosts, its pristine sense of purpose departing with the newspapers that gave it its unique identity. But for anyone seeking echoes of the giddy aspirations of the 1920s and 30s, these buildings remain evocative and potent, each epitomising the preoccupations of its decade. They are relics of a lost and dizzying world of inter-continental airships, Howard Carter and Tutankhamun, racing at Brooklands, the talkies, the Mitfords, the Blackshirts, Hollywood stars on the Queen Mary, Noel Coward’s Design for Living and Evelyn Waugh in his pomp … factories and temples dedicated to the latest news, expressed in architectural forms as up-to-the-minute as a Clarice Cliff tea-set.

New Life For Doomed Thoroughfare. It Takes All Sorts, Says Cockney. THE HELL OF THE STREET. ‘I was left for minutes on end. My thirst got the better of me.’ Starting today: her unique story. BANKERS WHERE ONCE WERE JOURNALISTS.My Secret Can Be Yours. FAMOUS ARTERY RUNS THROUGH BRITISH LIFE. ‘They were like savages.’ Can you name the missing ingredient? ‘A squalid, dirty and often pathetic affair.’In the space of ten minutes I saw no fewer than seventeen buses.RED-FACED MAN EJECTED FROM EL VINO’S. Why I Did It. ‘It took eight minutes for the police to arrive, by which time the thieves were long gone.’ To bring you this story I have crossed three continents under an assumed name. PREPARE YOURSELF FOR SMELLS GALORE. ‘He claimed it would change our lives’. Mersey House and a tale of neglect. Fantastic New Hunt Is On. Pasty-Faced Office Workers: ‘A Waking Nightmare’. Can 2/6 Really Buy Happiness? WORKSHY MAN CLAIMS TO HAVE FOUND SECRET OF ETERNAL YOUTH. He Was An Actor To The End. This Is The Gutter Press. And This Is The Gutter. Read my remarkable account.