Robert Hughes, The New Shock of the New:

People need beauty. … And so, we seek out zones of silence and contemplation, arenas for free thought and regimented feeling. Museums have supplanted the church as places, both of social congress and of civic pride. They are the new cathedrals. And despite the dubious quality of some of the stuff that actually goes in them, or even outside them, there’s a growing hunger for the direct experience of art on a museum wall.

Robert Hughes’s eloquent classification of galleries as cathedrals (from his 2004 documentary) is especially apt for Tate Modern. This post-industrial monument, the most popular modern art gallery anywhere, is situated plumb south of St Paul’s: twin bastions of belief squaring off across the Thames. You don’t have to be a religious person to love St Paul’s; but I don’t know how Christians who have lost their faith feel about it, or any other cathedral. Does it become a poignant symbol of loss, a reminder of disappointment?

Tate Modern has just announced that Hyundai has taken over (from Unilever) the sponsorship for its major space for new work, the Turbine Hall. The inaugural work for the Hall, Louise Bourgeois’s majestic Maman, was bound to be a tough act to follow, but since those spiders we’ve been treated to Anish Kapoor’s gargantuan ear trumpet, Dorothy Salcedo’s vandalism of the floor (which injured at least one unsuspecting elderly lady) and Carsten Holler’s slides, the hit of half-term: ingratiating, family-friendly, corporate-friendly installations that make good copy for broadsheet and tabloid alike. It has been hard to escape a growing sense that the Hall has become a sort of Battersea Funfair for the Boden set, a place where entertainment masquerades as cultural engagement. 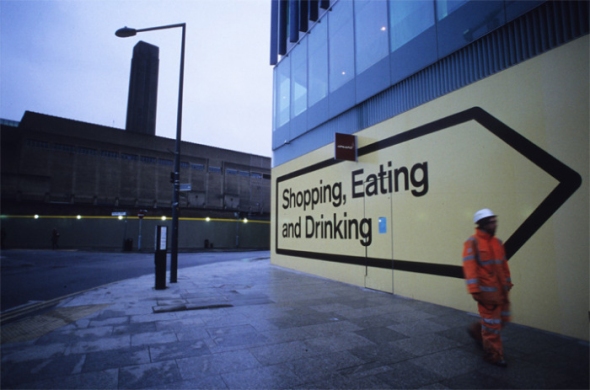 Away from the vast Hall, the nannyish curation of the regular galleries seems intended to prevent the art from speaking for itself: one feels manipulated by an entity determined to impose itself between the art and the viewer. An unsympathetic observer might see Tate Modern as a temple underwritten by the bling of ‘BritArt’, an edifice dedicated to the Traceys and Damiens beloved of feature writers and plutocrats alike. Outside its walls one sees the monolithic, zone-changing retail development that follows artistic success like a blight: the contemporary equivalent of trinket-shit peddlers blistering the walls of medieval cathedrals. Bankside is Southbank east. (Psychogeographers will doubtless point to the golden age of Bankside, when The Globe, The Rose and The Swan premiered Shakespeare and his contemporaries, whilst punters not interested in the fate of Desdemona or the Duchess of Malfi could watch the bear-baiting. Modern Bankside doesn’t offer any bear pits, but there’s a Pizza Express and at least one Starbucks.)

But the building remains sublime, even if its function as a gallery is compromised by the fact that (like the Guggenheim galleries in New York and Bilbao) its architecture overpowers the greater proportion of its content. And it would be bilious to deny that the Turbine Hall occasionally hosts something really good. As Robert Hughes concluded in The New Shock of the New: ‘We’re seeking value, looking for meaning, a place outside ourselves that tells us there more to life than our everyday concerns and needs. You could see this in the crowds gathering for Olafur Eliasson’s Weather Project in the Turbine Hall of the Tate Modern. Hundreds of monofilament lamps that suppressed all colours except yellow, shedding a gold light through gloomy air thickened by fog machines underneath a mirrored ceiling. People lay on the floor, staring up at themselves reflected in that ceiling, lit by the pale yellow light of their new sun god’.

‘The success of the Weather Project with its two million visitors shows that the hunger for new art is as strong as ever. The idea that aesthetic experience provides a transcendent understanding is at the very heart of art.  It fulfils a deep human need. And despite the decadence, the confusion and the brouhaha, the desire to experience it, live with it and learn from it remains immortal’.