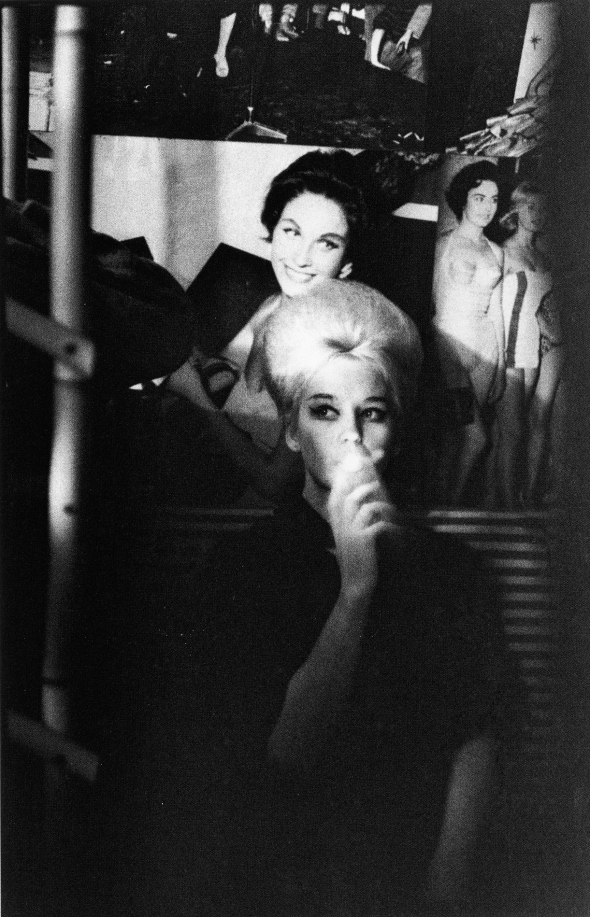 D.S.: In 1960, the young American photographer Bruce Davidson made a lengthy trip around England and Scotland. He was on a magazine assignment, and his itinerary is a catalogue of characteristic British tropes: you get the seaside, old ladies playing bowls, fox hunting, the pre-clearance terraced streets of Northern towns, the absurdities of class distinctions, etc. But this visit was obviously important for other reasons: it’s as if he’s still trying to define his own style, which may account for the slightly shy, hesitant manner of some of the pictures. He seems more obviously in charge of his material when he returned later in the 1960s to photograph Welsh miners, but there is a touching and empathetic quality to these early British pictures, a terrific sense of time and place, and a genuine feeling for lives being lived. 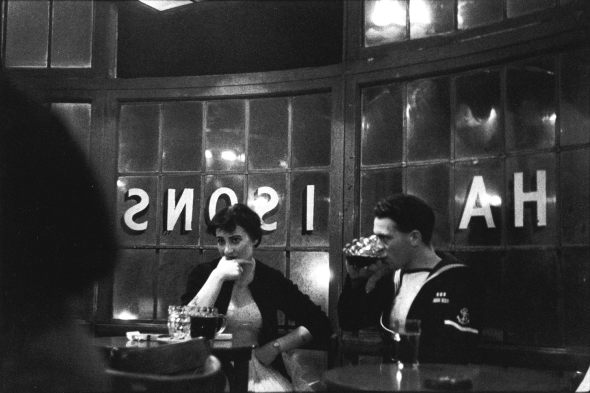 Inevitably, those of us who weren’t alive in the ‘pre-Beatles, the black and white 60s’ (did George Melly coin that term?) mediate the era through film and pop culture; hence, for me, a couple of these pictures have a Pinteresque quality. The sailor  – The Pool of London still a working port in 1960 – and the bored girl in the pub could be bit players in The Servant, swelling the chorus of murmured non-sequiturs as James Fox orders another one at the bar. ‘I had a bit of bad luck today. A real bit of bad luck. It’ll take me a while to get over it.’ At any rate, it is a classic image of a failed bid for excitement, of last drinks drained or forgotten. It’s closing time and she’s still not having any fun. The girl in the Soho club (has to be Soho, look at those pin-ups) is also up for a bit of fun, but she looks like she has an invite to go on somewhere else: The King’s Road maybe, where Dirk Bogarde is throwing a party. 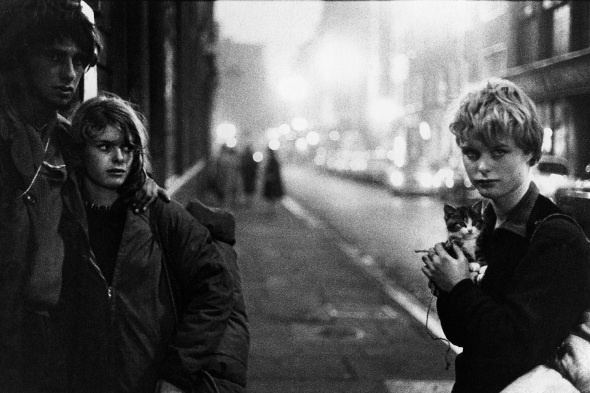 On the other hand, the image above seems eerily modern; it is one of a famous pair of photos taken during a long London night Davidson spent in the company of rootless young people much like himself. As a schoolboy, I remember an English textbook that used this image and invited pupils to make up their own story about the scene. Davidson has already given us a bit of detail about this encounter, but the picture still has currency as contemporary comment. It could have been taken last night.  These young people might be pioneer travellers but they aren’t gap year tourists. They are timeless strangers navigating another huge impersonal city on an endless journey through huge impersonal cities. No return tickets available. The melancholy of freedom. 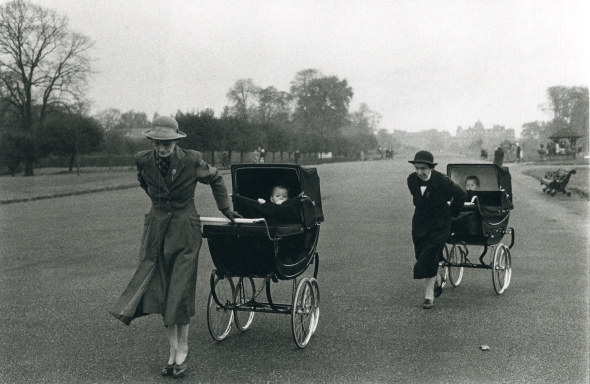 After that, the photo of the nannies in Hyde Park brings one up sharp, reminding us how long ago these images were made.  These women are old enough to have lost their sweethearts in the Great War, which might account for their choice of occupation. And those ‘baby carriages’ really look like they should be drawn by ponies.

For me, Davidson’s British pictures of this time evoke that nostalgia for something we haven’t experienced, something familiar yet impossibly distant. They have all the atmosphere and romance of travel, and all the greyness of English domestic life. (My father always commented on how grey things seemed in the 1950s – and that decade was conspicuously good to him.) Davidson’s shows us England just before it shed its post-war veil. Things were about to get a lot livelier, but who in these pictures knew? Maybe that girl in the club.

Thanks to ROSEGALLERY, Santa Monica. ROSEGALLERY is exhibiting photographs by Bruce Davidson, Evelyn Hofer, Martin Parr and other other artists at Photo London, Somerset House, 19- 22 May. (Stall B7.) Bruce Davidson’s England/Scotland 1960 is published by Steidl.

Photography is concerned with appearance rather than truth, and occasionally, one comes across a photograph so mysterious that one is stumped for any sort of comment. One thinks of the Andre Kertesz photo of a shadow behind glass on a balcony in Martinique; of Robert Frank’s picture of a girl running past a hearse and a street sweeper on a drab London street; or Elliott Erwitt’s shot of tourists in a Mexican charnel house, all acknowledged masterpieces. I think the above photo by Dave Hendley has a similar power. Dave offers no insight: he shot it quickly with his Leica as he walked past the men, then moved along before they had time to register that he had taken their photo (‘I was more ruthless back then, I don’t stick my camera in people’s faces any more’.) But it invites speculation, so I am going to offer mine.

There are few clues in Dave’s photo as to the exact period, but somehow we know it belongs to the past: in fact, it is the early 1970s – but it evokes a time slightly earlier than that.  I am reminded of the ‘black and white’ 1960s, the lost era of Victim, Pinter’s The Servant, and, especially, Joe Orton’s Entertaining Mister Sloane: a world of furtive encounters afforded a desperately genteel gloss (“the air round Twickenham was like wine”). But I don’t know whether my interpretation is correct and it probably isn’t. More than one photographer has got into trouble because a photo suggested something about its subjects that was misleading or even libellous. Whatever the reality, the picture is simultaneously comic, poignant and slightly disturbing. The sharply assessing gaze of the man on the left is unnerving enough, but I find myself worried by the man on the right, his too-tight tie and his inscrutable smile somehow just wrong. (I am also reminded of this painting.)

As with the photo we ran yesterday, this photograph is a precious survivor of a cull of Dave’s early work which the photographer carried out with youthful ruthlessness. That was many years ago and, needless to say, Dave now regrets this; fortunately, this image survived as a print which Dave recently discovered in his mum’s attic. 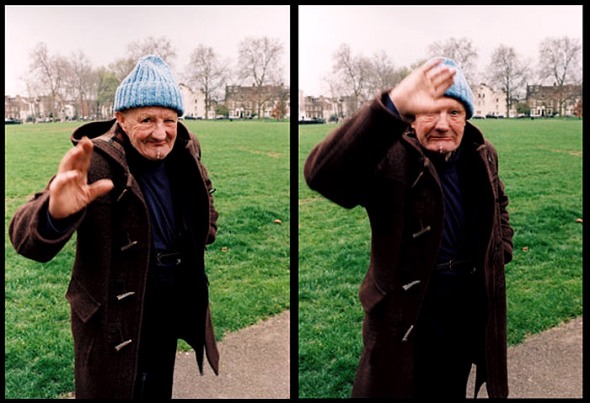 From The Caretaker by Harold Pinter:

DAVIES: I got plenty of references. All I got to do is to go down to Sidcup tomorrow. I got all the references I want down there.

DAVIES: Sidcup. He ain’t only got my references down there, he got all my papers down there. I know that place like the back of my hand. I’m going down there anyway, see what I mean, I got to get down there or I’m done.

MICK: So we can always get hold of these references if we want them.

DAVIES: I’ll be down there any day, I tell you. I was going to go down today, but I’m … I’m waiting for the weather to break.

This poignant little exchange from Pinter’s play has become so familiar that Sidcup has forever after been associated with surreal suburban promise; a place of deliverance for the pitiful tramp Davies. Pinter’s choice of Sidcup as the place of Davies’s dreams was not random: it was the HQ of the Royal Artillery during the post-war period, so Pinter is implicitly giving Davies a military history. Not that it matters: the choice of the bleak Kent suburb of Sidcup as a land of milk and honey is as cruelly inappropriate as Eric Idle’s appropriation of Purley as a hotbed of vice in Monty Python’s ‘Nudge’ sketch.

According to Michael Billington, Pinter based the play on scenes he witnessed at a house in Chiswick where the author and his young family were living in the late 1950s. The landlord’s brother – Austin – was the caretaker of the flat the Pinters were renting, and one day:

“Austin brought a tramp he’d met in a cafe back to the house and the tramp stayed for two or three weeks. Pinter knew the tramp very slightly and then one day he looked through an open door and saw Austin with his back to the tramp gazing out into the garden and the tramp busy putting stuff back into some kind of grubby hold-all, obviously being given his marching orders. All this matters because it then becomes the bones of the plot of The Caretaker.” (Pinter at the BBC)

It is rather pushing it to suggest that the gent in the above image has anything to do with Harold Pinter, but my encounter with him had a Caretaker-like quality. I was wandering around Parson’s Green, killing time on a cold afternoon before an appointment on the west side of town, when I was accosted by the man in the hat. He spoke to urgently me at some length; it could have been a request for money, for a cigarette, or just for attention, but I could not understand anything he said. Finally, I produced out my camera and took his picture, prompting him to move off. Having lost interest in soliciting my company, he went and urinated on a tree. A small, authentic London encounter.
… for The London Column.

BARRETT: She’s living with a bookie in Wandsworth. Wandsworth!

– from Harold Pinter’s screenplay for Joseph Losey’s The Servant, 1963.

No. 30 Royal Avenue in Chelsea – on the right hand side in the above photo – was used for the location filming of Pinter and Losey’s class psychodrama The Servant (from a novel by Robin Maugham, who seems to have been written out of the picture completely). The plot has BARRETT (Dirk Bogarde) being engaged as a manservant by TONY (James Fox),  an ineffectual toff who has just taken ownership of a house in Royal Avenue. BARRETT takes charge of the refurbishment of the house and, bit by bit, the destruction of TONY, whose increasing reliance upon BARRETT reflects the weakness of his personality and the inherent decadence of his class. (Discuss.) The action culminates in a sort of fully-clothed orgy at which Bogarde, Fox, Sarah Miles and Wendy Craig engage in a Mexican stand-off whilst listening to Cleo Laine. This was regarded as ground-breaking cinema when it premiered at the Venice Film Festival in 1963.

The script features some of Pinter’s best lines on film, and showcases Losey’s bravura directorial technique as well as his ambivalent approach to British society (Losey himself lived in Royal Avenue). It also features the glorious black and white cinematography of Douglas Slocombe, including location shooting around Chelsea, which, in and of itself, is a precious document of a lost age: the ‘black and white 60s’, the pre-Beatles 60s.

A few years later, The Chelsea Drugstore opened on the corner of King’s Road and Royal Avenue: an artefact of Swinging London proper, this establishment was used as a location for the filming of Kubrick’s A Clockwork Orange and was hymned by The Rolling Stones in You can’t always get what you want. By that time, James Fox had been bamboozled in a rather more emphatic fashion – the class element reversed – by Mick Jagger and Anita Pallenberg in Roeg and Cammell’s Performance. This latter, filmed up the road in Notting Hill, was made a mere five years later, yet it makes the Chelsea of The Servant – folk singers (Davey Graham) in wine bars, Sanderson wallpapers, ski-pants, pork pie hats,  sheepskin coats over cable-knit jumpers, class warfare over Dubonnet and soda – seem as distant as the Chelsea of Rossetti or Oscar Wilde.

The Servant at IMDB.