Hawksmoor and the city. 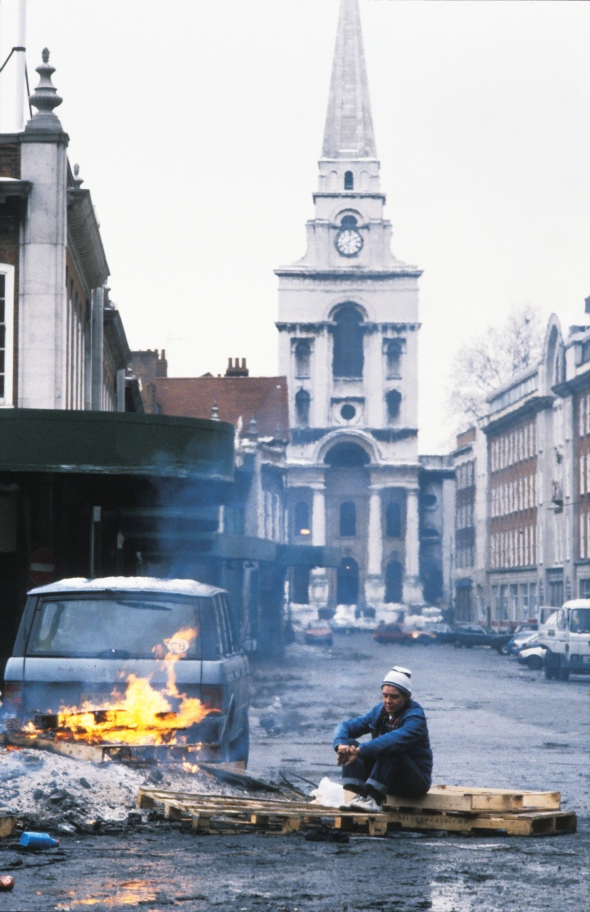 Christ Church Spitalfields from Brushfield St., 1990. (This and all photos on this page © David Secombe.)

Ever since they began to rise over London just over 300 years ago, the churches of Nicholas Hawksmoor (1662–1736) have had an ambiguous – even paradoxical – relationship to the city that made them and which they have in turn remade. On the one hand, the churches of St Anne, Limehouse, Christ Church, Spitalfields and St George-in-the-East in the old parish of Stepney, St. Alfege in Greenwich, St Mary Woolnoth in the City of London and St George, Bloomsbury are inextricably bound up with the history of London. On the other, they stand apart, somehow belonging to a rather different time and place, almost as fragments of Ancient Rome transplanted into London.

To understand Hawksmoor’s churches and their relationship to the city, one has to go back to the aftermath of the Great Fire of 1666. Even as the fire still smouldered, Hawksmoor’s later master, Christopher Wren, was working up a plan for London’s rebuilding that would replace its narrow and irregular medieval streets with grand boulevards. Most importantly, and taking direct inspiration from what he had learned in Paris the year before, Wren’s plan would have imposed a clear spatial order and control on the dangerous and unruly metropolis.

Hawksmoor’s approach to city planning was different. Hawksmoor never created a plan for London in the way his master had done, but he did produce (unbuilt) designs for re-planning Oxford and Cambridge, and parts of London around St Paul’s Cathedral, Greenwich, and Westminster. The easiest way to understand how these would have worked is to look to contemporary landscape gardens: manufactured landscapes littered with classically-inspired temples and follies, structures that dominate the vistas and embody the estate owner’s authority.

Similarly, in Hawksmoor’s idea of the city, spatial order and control extended not from the street layout, but from monumental buildings that would physically dominate their surroundings. In all Hawksmoor city plans we see a recurring strategy of clearing the areas around important buildings – both old and new – so that they might express their spatial dominion over the surrounding cityscape. What happened in between was of far less importance. It’s hard to imagine the effect of these unbuilt plans when described in the abstract, but to see their principles in action we only need look as far as Hawksmoor’s churches.

Even now, the areas around Hawksmoor’s three churches in the old parish of Stepney still retain the ‘edge-lands’ feel they must have had when they first grew up in the decades following the Great Fire. Today that energy is manifested in the clash of different cultures and economies as the City of London encroaches on East End communities. In the early eighteenth century the energy arose through the rise of dissenting religious groups, outside the orbit of central Anglican control, with all the social and political ramifications that that held. As a result, Hawksmoor’s churches were conceived from the off as outlying beacons of the city’s spiritual and political centre – monuments of state and Church authority in areas that had none.

All three of Hawksmoor’s Stepney churches are colossal structures, deliberately sited to be seen in the round, that dominate their environment by sheer scale. Not surprisingly, their overbearing size has played a part in their subsequent neglect. In a 1975 letter to The Times, the then Bishop of Stepney, Trevor Huddlestone, was at great pains ‘to make it clear that the state of disrepair of Christchurch, Spitalfields is in no sense due to the failure of the local Christian community, nor, in my opinion, to neglect by the authorities of the Church of England’. Such a building of ‘cathedral-like proportions’ was, he argued, an ‘appalling responsibility for the Church’.

In addition to their size, Hawksmoor was able to make his churches stand out by his choice of material: white Portland stone, as opposed to the red brick of the surrounding city. Hawksmoor’s churches appear as if fully formed from a single gigantic block of stone. There’s the sense that this is the form the stone wants to be – a testament to their design, the final and most enduring aspect of their differentiation from the surrounding city. 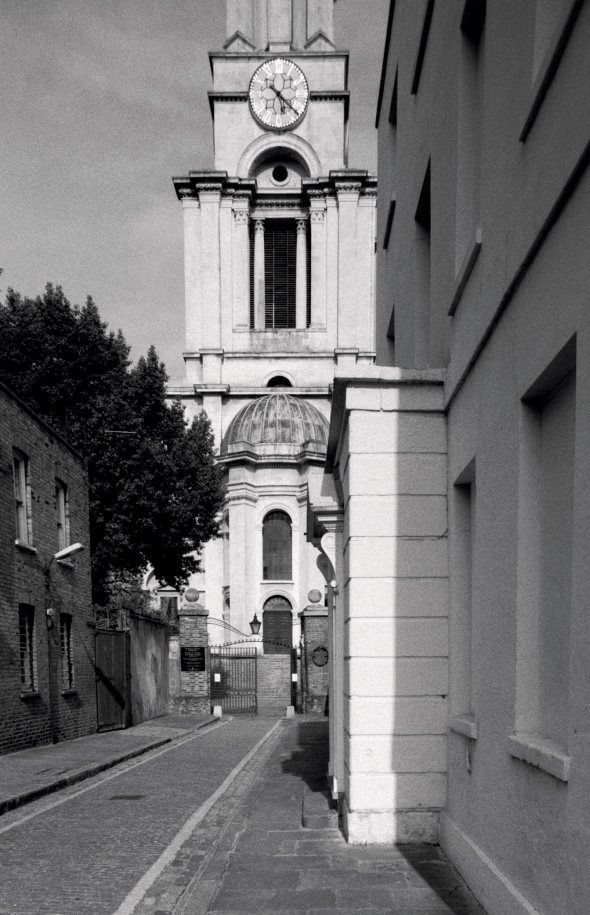 Having risen up through Wren’s office in the 1680s and 90s, by the beginning of the eighteenth century Hawksmoor was arguably the best-trained architect Britain had ever seen. Classical architecture was his intellectual and aesthetic bedrock, but he was also fascinated by Gothic architecture and in particular its origins – as he saw them – in the churches of the early Christians of the near east. Hawksmoor’s genius was to bring all this learning to bear in creating a series of church designs rich in reference, resonance and allusion. The result was a series of buildings in which architecture was taken back to its very origins, with ideas and references built up in complex layers of masonry, imbuing these structures with the authority of the architectural past. This is architecture conceived through a sculptural sensibility to create buildings that speak to us but indirectly: through our senses and our emotions. 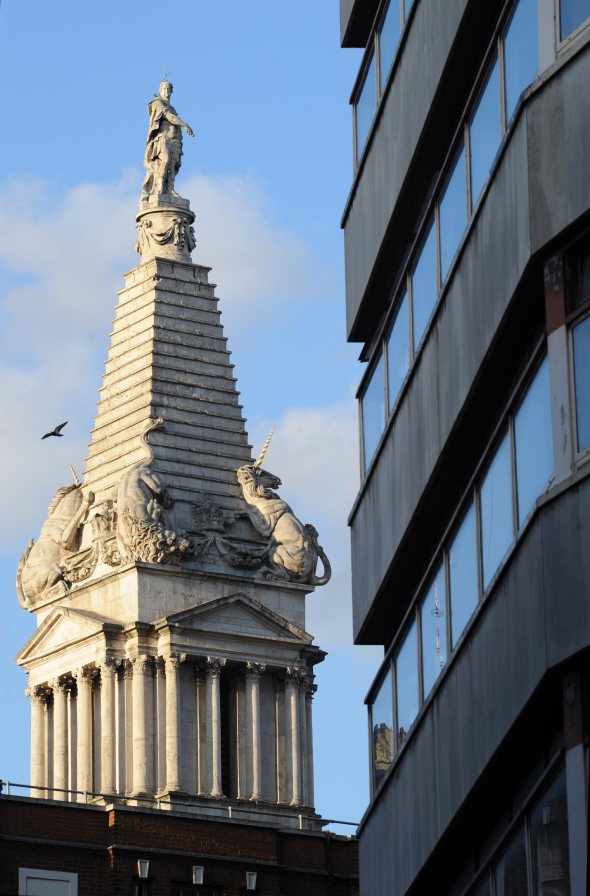 There are few buildings in London that look back to the past while at the same time prefigure the future. While part of London’s history, Hawksmoor’s churches exist in the future too, yielding ever more secrets as the city changes around them.

… for The London Column. Owen Hopkins’s book From The Shadows: The Architecture and Afterlife of Nicholas Hawksmoor is published by Reaktion Books.

On Tommy Cooper by Garry Lyons:

FRANKIE:
It’s all for you, isn’t it, Tommy?  All the time – even offstage – you’re thinking:  how can I get noticed?  How can I get a gag out of this?  You’d piss in the gutter to make a drain laugh, wouldn’t you?  You’d shoot your granny for half a titter.

TOMMY:
You leave that gutter out of this.

These lines are a characteristic interchange from the two eponymous comics in my play Frankie and Tommy. Frankie is my dad aged 23, as I re-imagined him.  His oppo is none other than Tommy Cooper. The play tells the story of their brief and ill-fated double-act, entertaining the troops in Cairo in 1946.

It was commissioned by John Godber for the 21st anniversary of Hull Truck Theatre Company, and premiered at the Edinburgh Festival in 1992.  It caused a bit of a stir. I didn’t see my play as an exposé of a celebrity so much as a bitter-sweet Everyman tale about lost opportunities and faded dreams.  For me, the story was a universal one about the shadow cast over youthful illusions by a brief, fleeting brush with true genius.  It was about lost opportunity, and coming to terms with one’s failures and mediocrity.

The play is like a variety show Amadeus, with my dad as Salieri and Cooper as Mozart.  It’s as much a professional tribute to Cooper’s stage brilliance as it is an unveiling of Cooper the man.  It was an attempt to show the fez-wearing buffoon in all his perfectionist complexity, an artist in whom emotional inadequacy was the spur that drove his hyper-nervous and shambolically skilful act – an act full of fumbled magic tricks and painful wordplay acting as armour-plated defence mechanisms from too much inquiry into the inner self.

The invented dialogue of Frankie and Tommy – which owes a lot to Morecambe and Wise, Barker and Corbett and similar duos – is full of puns and evasions in which Cooper constantly undercuts a serious point with a wisecrack or non sequitur. It’s the technique of the inveterate joker who can’t bear to face reality, yet in dodging it not only makes us laugh but often presents us with an even more profound truth.

Perhaps, in the end, that is the enduring force of Cooper’s humour. He wasn’t, as some have claimed, the first ‘alternative comedian’. There was nothing politically anti-establishment about his mainstream, commercial television style.  But it was certainly subversive in the way it used ineptitude as comic strategy, satirising the empty slickness of much light entertainment and reminding us that at heart we’re all fools within.

This post appeared on The London Column in 2011; we are reposting it as John Claridge’s photos of Tommy Cooper are currently showing in the auditorium of the Museum of Comedy, implausibly located the crypt of Hawksmoor’s St.George’s, Bloomsbury.  Museum of Comedy, The Undercroft, St Georges Church, Bloomsbury Way, WC1A 2SR (open Tuesday – Sunday 12pm – 5pm).