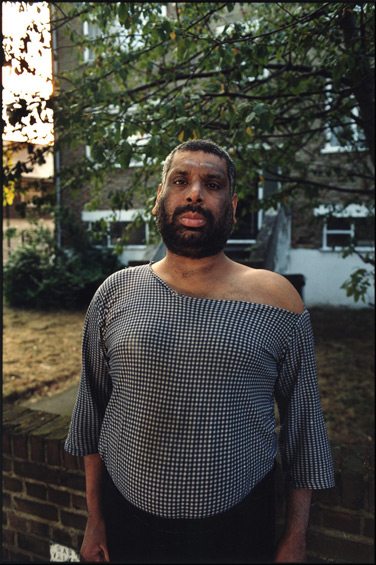 Walking up to strangers and asking them if you can take a photograph can be a ticklish business, but more often than not people are charming and accommodating. They will often pose for you with the kind of co-operation which one would expect of a professional model; but one has to get it done with fast.

The gentleman in today’s photo was a fixture on Brockley’s Wickham Road for years. I lived nearby and saw him almost daily: seen at a distance, he appeared to carry on vehement conversations with himself, gesticulating forcefully and waving his customary tin of Tennant’s Super. (Someone told me that this mind-numbingly strong lager is known colloquially as ‘Purple Herple’, but I’m not sure whether to believe them.)

I never found out his name, but he possessed a wonderful profile, like a teardrop wearing trousers: it was as if he’d been poured into his habitual outfit of elasticated, calf-length pants and off-the shoulder vest. Out walking one Saturday morning, I turned a corner and encountered him at close quarters. He was calmer than usual and I steeled myself to ask him if I could take his picture. He instantly  snapped to attention, and very formally and politely complied with my request. I think he must have had a military background, as his pose was very erect, and as I tried to edge round for a profile shot he swivelled with my camera, so I was obliged to photograph him straight on, as he wished. This is entirely fitting, and he emerges in the photo as he appeared to me in person: as a distinguished gentleman who might have encountered some difficulties but who was yet to jettison his dignity.