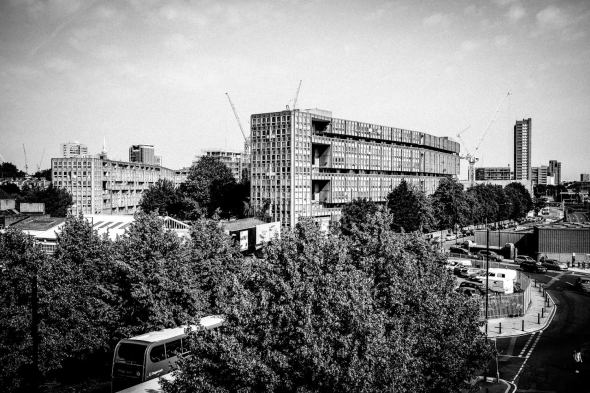 The controversial plan to tear down the Robin Hood Gardens estate will move a step closer in the next few days when a winner for its replacement is named. Proposals by Tower Hamlets Council to take the wrecking ball to the housing estate, designed by Alison and Peter Smithson, caused outrage among the profession, with more than 2,000 people, including Richard Rogers and Zaha Hadid, backing a BD campaign to have it listed. This week Simon Smithson, architect son of Alison and Peter, again condemned the decision to knock the estate down. “If it’s pulled down I think history will view it as a real act of vandalism,” he said.

In the wake of our recent pieces on Balfron Tower, we present another feature on a controversial, maligned and generally unloved piece of 1960s architecture. Robin Hood Gardens, a mere stone’s throw away from its Goldfinger-designed neighbour, was designed by Peter and Alison Smithson, Brutalism’s golden couple, theorists-cum-architects, ‘the leading architectural thinkers of their generation in the UK’ (it says here). Unfortunately, the location could not be less promising: Robin Hood Gardens teeters like a cliff above the northbound carriageway of the A12 exiting the Blackwall Tunnel, although motorists on the southbound lanes get a clearer view of its looming bulk. As a motorist who has used the Blackwall Tunnel for over a quarter of a century, this view of RHG has always reminded me of a discarded set from Alien or  Space 1999 that has been inexplicably dumped in Poplar. Regardless of all other considerations, its fabulously disadvantaged position alone mitigates against 21st century rehabilitation. Not for Robin Hood Gardens the executive-friendly make-over of Balfron Tower; discussions of RHG’s qualities invariably involve a stand-off between those calling for demolition (past and present residents, Tower Hamlets council) arrayed against those who want it listed and thus preserved (Brutalist apologists, mid-century modern aficionados).

A great deal has been written on the failure of Robin Hood Gardens. Those who defend the building speak of the spaciousness of the flats themselves, of the noble attempt to create a space of  ‘central greenery’ in the site’s layout, and the Smithsons’ genuine feeling for the humanity that would eventually inhabit their design: ‘Belonging is a basic emotional need … from it comes the enriching sense of neighbourliness. The short narrow street of the slum succeeds where spacious redevelopment frequently fails.’ Robin Hood Gardens has heavyweight admirers; thus sprach Lord (Richard) Rogers of Riverside: ‘It has heroic scale with beautiful human proportions and has a magical quality. It practically hugs the ground, yet it has also a majestic sense of scale, reminiscent of a Nash terrace’. 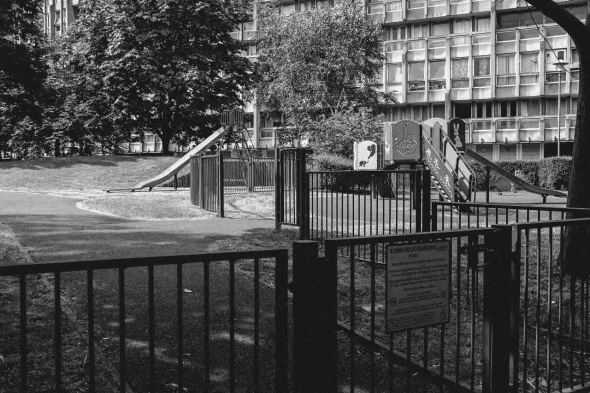 Its fans have something of a hard sell. Even the most ardent Smithson admirer has to admit that the site is hideous. A friend of mine, an architect from the Caribbean, spoke of her numbed disappointment on seeing RHG for the first time; in her eyes what had seemed eloquent and rational as a plan failed hopelessly as an actual environment. (In researching this piece, I stumbled across a fascinating item comparing RHG’s central green space to WW1’s battlefield of Ypres.) In 2009 RHG was denied the protection of ‘listed’ status (with English Heritage voting firmly against listing) and in 2012 Tower Hamlets Council announced demolition of the estate as part of a wider ‘regeneration’ scheme for the area. There isn’t room here to excavate the arguments and sheer heat of the ensuing debate, which is taking place even as RHG is being dismantled; but whilst nostalgia for the legacy of Brutalism might be compared to a fondness for discredited utopian certainties, the current complexion of London’s skyline makes one shudder at what is likely to be erected in RHG’s place. 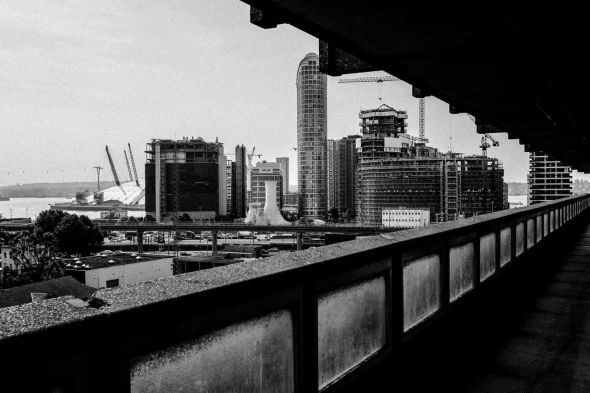 These photographs by Craig Atkinson (from a fine new edition published by the ever-admirable Cafe Royal Books) give an indication of RHG’s imposing mass as well as its shortcomings as an urban environment. But it is the last picture in this sequence that is so telling; the view across to the 21st Century Isle of Dogs and Greenwich Peninsula. There’s the new money, and what all of London will, most likely, soon resemble. There goes the neighbourhood. DS

Further reading: the invaluable site Municipal Dreams published two articles on Robin Hood Gardens in April this year, and they are mandatory reading on this topic.

Zoo animals are removed from their own contexts, their own habitats, and resituated in a context that makes it more convenient for spectators to see them.  The disjunction between where an elephant really lives and this Regent’s Park pied-a-terre is surreal.  Zookeepers tell their audiences that the point of zoos is for people to establish connections with other animals, and to inculcate a sense of ecological awareness as human expansion threatens animal habitats.  But paradoxically – perversely – the zoo features animals divorced from their world.

The elephant people see in the zoo is not a “real” elephant.  The real elephant lives in her place, in her habitat, in her environment, among and alongside many other animals of her own species, as well as many animals of other species, predators and prey, friends and strangers.  She lives there because her lifecycle is predicated upon a certain seasonal climate, a certain range of movement, an environment comprised of certain plants, trees, water, dirt, stones, topography, and so forth.  It is fundamentally impossible for zoos to reproduce any significant amount of this animal’s habitat.

As people expressed feeling of guilt about seeing caged animals in prison, some zoos began to modify the enclosures, largely to alleviate the spectator’s discomfort.  Perhaps the designers who created this brutalist elephant compound thought that the “brutes” inhabiting it would feel at home here. But the zoo’s architectural spectacles do not alter the fact that the constrained animal on display lacks most aspects of the environment in which he or she naturally lives.  Zoo-goers cannot see an elephant who acts or feeds or sleeps or eats or mates or nurtures or fights in the way a real elephant would.  Depressive, anxious, and fearful behaviour – learned helplessness, self-injury, stereotypic repetition — is rampant among captive animals on display.