Remember that old 70s movie, Network? It’s mainly famous for its catchphrase – ‘I’m as mad as hell and I’m not going to take it any more!’ – and for Peter Finch’s bravura performance (which earned him a posthumous Oscar) as Howard Beale, the newscaster who has a meltdown on television and gets the whole country saying it. On Saturday night I went to a private reading of a stage adaptation of the film, scripted by my friend Chris Brand (a fine actor as well as a writer) and produced by another friend, Peter Finch’s nephew Dallas Campbell. There are several reasons why it was a brilliant evening, and the first of them – before the evening even began – was the surprise of the surroundings.

We were in the old Water Board building in Rosebery Avenue in Clerkenwell. This sounds boring enough, and indeed we had only been told it was going to be in a ‘board room’.  But this is grand municipal architecture, and this particular example harbours a secret at its heart.

The Water Board building was built on the site of a previous water company building – the old New River Company building, Water House. The New River is the river you can see a bit of, running through Clissold Park in Stoke Newington; it’s technically more of a canal; built by one Hugh Myddleton to bring water from Hertfordshire to a rapidly growing London. It was completed in 1613. Water House, built in the same year, was originally a ‘cestern house’ adjoining the reservoir, and included accommodation for the site manager.Many people had use of its residential accommodation (including Edward Sadler, who was also probably the founder of next-door Sadler’s Wells). This building grew over the decades to reflect the massive success of the New River company (King James, a key funder, lost money on it, and Hugh Myddelton was created a baronet). It grew larger and larger, and more and more respectable until finally it was a large house. In about 1693, one Sir John Grene, a wealthy shareholder of the New River Company, was living in Water house, and he commissioned an ornately carved set of pannelling for a room that became known as the Oak Room… You can read a long and intensely interesting account on  British History Online.

In 1914, London’s water was municipalised and Water House had to go. Work on the new Water Board building began in 1915 – stopping between 1916 and 1919 due to the War – and the building, on a scale commensurate with the ambition of its civic status, was finished in 1920. For the past twenty years it’s been flats. When you walk in through its large stone-clad entrance, it feels plausibly Edwardian – but then the first thing you are confronted with is a grand, glorious, light-filled, pink-painted Art Deco ballroom. (This, however, is the former Rental Ledger Room, and used to host ranks of large oak desks.) The building is awash with light.

Turn left and through large glass doors to a wide, high, sweeping staircase with huge windows. At the top, back through the doors, turn down a little corridor, open another door, and you are suddenly in a rather unexpected time-warp: an oak-carved antechamber, which is the mirror of another oak antechamber, at the two ends of a dark, oak-panelled room. A marble fireplace looms in the middle of the long wall, with bookshelves in the alcoves on the sides, and intricate carvings above. Pride of place belongs to a magnificent lion and unicorn panel, where the unicorn’s horn stands free of the carving.

This is Sir John Grene’s Oak Room – given new ceiling joists in the 1860s, and then carefully dismantled and reassembled in the new Water Board building – a nod to the history of the site. The room was dismantled again in the War and the panelling taken away for safe-keeping, but the ceiling could not be moved again and the central painting had to be restored again after the War. The room is very dark – it makes more sense when you know that in its day it had glorious windows on three sides, giving panoramic views over the Round Pond that was the New River reservoir, and its filter beds. It was even open to the public. 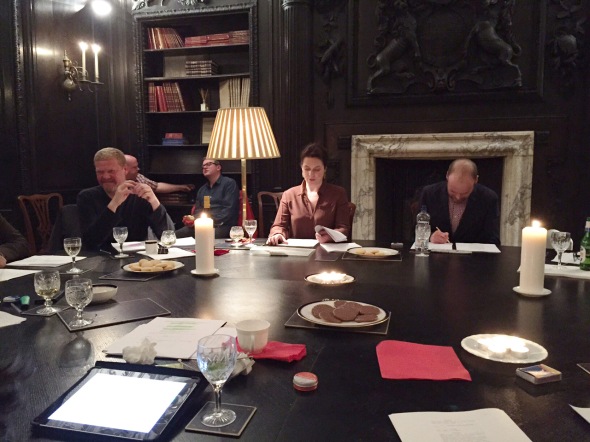 Accommodations had to be made when it was transplanted into the new building; in one corner we found a door which, opened, revealed only brick. It was on the outside wall of the building. It’s been not-a-door for almost a century, but for two and a half centuries before that, it was a door and people walked through it. And the doorways into the antechambers – two on each end of the room, with a central panel – will have been its other windows.

You could write a whole blog post just about the notion of civic pride and historical awareness, the respect for the past and sense of beauty and historical decency that made a company spend £2,000, back when that was proper money, to keep this in situ. Nowadays, they would more likely put it on display in an airlocked vault under perspex.

In the middle of the room is a giant black oval table. When we were there it was littered with scripts, plates of chocolate biscuits, and numerous large white candles. The room has electric light, too, of course, but the three-dimensional black walls seem to just absorb it. Those three walls of windows have been a bit of a loss, in fact.

So there we were. Friends on chairs around the walls of the room, with glasses of wine or gin & tonics. Around the table sat the actors. And the reading, in due course, began… 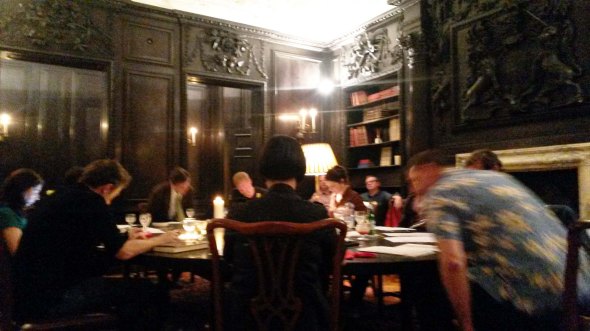