I had never been into boxing. My granddad had been (“The fairest sport in the world,” I remember him saying), but my dad wasn’t and my mum thought it was brutal. I’d never really been into boxing films either. Rocky was too silly, with Stallone too incomprehensible and the outcomes too predictable. I preferred Raging Bull’s storyline, but didn’t consider it A Great Film because it was about boxing, a sport I wasn’t interested in. I came to see the appeal of boxing through the viewfinder.

Although I turned up at York Hall in Bethnal Green for aesthetic reasons I left with an appreciation of the sport and the atmosphere a good event generates.  From the edge of the ring, camera jutting between the ropes and elbows on the canvas, one can hear the difference between a body shot (hollow) and a punch to the face (quieter but sharper, slappier), one can feel the canvas move as the fighters advance, stumble or collapse. I saw blood drip from an eyebrow, land beside my camera and get smeared by a boot. Between matches, fights break out among the crowd and heavily made-up girls look on approvingly.

Fans spilling out from the neo-Georgian building’s small bar are ushered to the sides to make way for the boxers as they approach the ring, twitching and keyed-up, surrounded by coaches, medics and hangers-on looking for vicarious thrills. The crowd cheers or boos the glittering pantomime as they try to gauge the fighters’ disposition and energy. Is the outcome portended by the manner of slipping between the ropes? The small flurries of punches cast into the air as the music diminishes? The shimmer of an eye or the angle of a chin? Sometimes they walk nonchalantly, eyes untelling, others swagger top-hatted and confident.

Some fighters have a routine they go through before a fight, every step and gesture recreated so as not to risk offending the fates. Bounce off the ropes, dance to the centre with fists high, turn once then twice, pass the cloak to the trainer, skip on the spot to warm the feet.

Up on the balcony, flags are unfurled: Albanian Eagles, Irish tricolours, slogans of support and abuse.  The music ebbs away, lights drop, fighters bounce into their corners for a last minute pep talk. Gumshields go in. gloves are checked. By this point, some fighters will already know the outcome and are bracing themselves for noble defeat. Suits and sovereigns worn over crisp white shirts in the front rows, hushed predictions, t-shirts and last minute taunts from the cheaper seats, then a moment’s reverence before the cacophony that accompanies the first bell.

Watching boxers pummel each other made me feel a mixture of blood lust (I think I shouted for one guy to kill the other) and a kind of giddy revulsion, an awareness that I shouldn’t be getting an illicit kick out of someone taking punches. It’s brutal, but also fair and an accurate distillation of what all sport is at its core: opponents using everything they can to win, whether it is speed, composure, anger, fear, technique or strength.

Most interesting to me are the slower moments of pathos where the fighters slump into each others’ arms, sometimes in no hurry to extricate themselves as they agree to take a breather, or where a fighter sits sullenly in a corner, advice bouncing off him as he readies himself to go back for another painful round of inevitable beating. It’s in these moments rather than the sporty moments of competitors hitting each other that boxing gains its power and epic proportions. 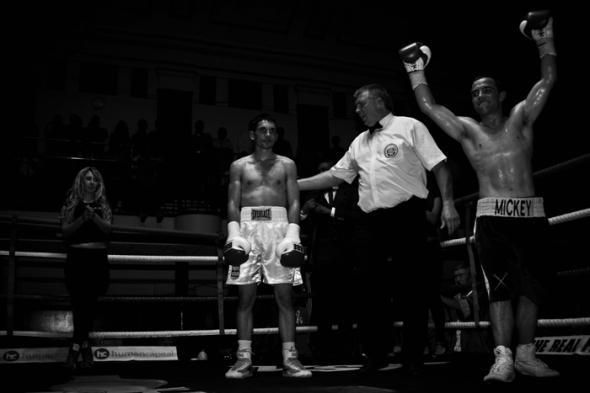 Theoretically, boxing is a bracingly pure sport: two men hit each other until one of them falls over. Apart from bullfighting, it remains the modern world’s last remaining link to the primal brutality of the arenas of antiquity, the fighters acting as vessels for the aspirations and prejudices of the crowd.

The iconography of the modern sport was configured in the early-mid 20th century: press photographs by the likes of Weegee and Hollywood B-movies of the 1940s and 50s continue to inform our perception of the spectacle.  In cinema, the boxing narrative generally involves a heroic and inarticulate outsider, loved by his doting wife/girlfriend/mother/child, fighting against the odds to claim redemptive victory in an unequal contest. Films such as The Set-Up, Somebody Up There Likes Me, Requiem for a Heavyweight and, most recently The Fighter, all use this template or variations on it. Dramatically, the boxing movie format is as clear and simple as the sport itself. And whilst there are many notable boxing films made in colour (Rocky, The Champ, Fat City, etc.) it is significant that Martin Scorsese chose to make Raging Bull in black and white. Raging Bull is an explicit homage to the golden era of boxing – although the protagonist of his story, the real-life boxer Jake La Motta, was a far cry from the noble chump played by Robert Ryan in The Set-Up, a model of the classic boxing movie. In black and white, boxers are mythologised; and since we don’t see the colour of blood, the suffering is rendered more abstract and perhaps less vulgar.

It is hard not to think of such precedents when looking at Alex Hocking’s pictures of boxers at Bethnal Green’s York Hall, a venue with a mythology of its own.  This is not a sport inhabited by academic high achievers. Boxing allows these young men an opportunity for real-life redemption: intense, brightly-lit moments of aggression and pain in exchange for a shot at a better life. The picture above suggests a clear narrative for this particular fight: I don’t know anything about the boxers, what the outcome of the bout was, what interest – if any – the young woman took in the proceedings; but the image encourages me to imagine my own B-movie scenario for this particular match, featuring a noble and gifted newcomer, a tough but honest coach, a sick mother, a manipulative manager, a towering opponent and a girl with a heart of gold.