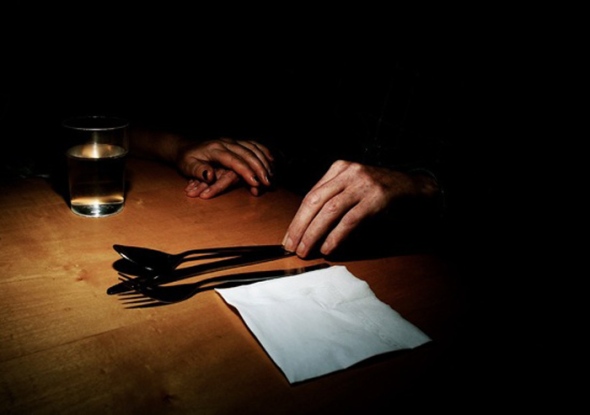 The Suicides by Roisin Tierney:

Softly they settle round me now,
gentle birds come home to roost,
dropping and shuffling one by one
onto the desk, open drawers,
heaped directories, nursing tracts.
They do not breathe and yet we might
be swapping breath, in for out,
so close they are, so present.  They
are weightless, obviously and yet,
so great their need, or mine, we press
forehead to forehead one by one,
each for a second only, until
we have all touched.  The hospital,
Victorian and beautiful, is still.
My list is cruel.  Their various ends-
Hanged. Fell from a height. Overdose.  etc.
make for hard reading. Some were very young.
Many received the best of care.  I sigh.
We, the Suicides and I, put down
our books, pens, burdens, leave the building.

All the poems in this series are from Dream Endings, by Roísin Tierney, Rack Press 2011, and used by permission.

This Victory Means Something by Naomi Woddis:

Scarlett says any woman
who loves the fight, has a man
in her family with gloves
her father, five uncles.

Fi’s boxed in the RAF.
She remembers the special time
by his side, witness to swinging
punches on TV, the Rumble in the Jungle.

All three learned early that this
victory means something.
The neat rules of a fight, what it is
to be invited, the chance of a win.

Boxing: 1810 – a compilation by Charles Jennings:

Gentleman John Jackson – Dear Jack, Byron called him…
Jackson, a former bare-knuckle champion, retired from the ring and started his own school at 13 New Bond Street…
Foreigners can scarcely understand how we can squeeze pleasure out of this pastime; the luxury of hard blows given or received; the great joy of the ring; nor the perseverance of the combatants…
A prizefight to be held in a country town, such as Grantham or Derby, would attract spectators from as far away as London or York…
A crowd of seven thousand…
The gentlemen of ‘The Fancy’…
Nob-thatchers…
a bit of muslin…
Not to have taken lessons from Mr. Jackson was a positive neglect of a gentleman’s ordinary education…
Bob Gregson, the ‘Lancashire Giant’, fifteen stones in weight and over six feet tall…
Exercise is good, and this the severest of all; fencing and broadsword never fatigued me half so much…
A fight could last up to fifty rounds…
Not a bad boxer when I could keep my temper, which was difficult…
Holding a man’s hair to keep him in place to be hit…
This cover-me-decently, was all very well at Hawthorn Hall, I dare say; but here, among the pinks in Rotten-row, the lady-birds in the Saloon…
the legs and levanters at Tattersall’s…
it would be taken for nothing less than the index of a complete Flat…
The Prince Regent withdrew his patronage, and refused to attend any further prizefights after a man he had promoted was killed in the ring

High Society: A Social History of the Regency Period; Lord Byron; William Hazlitt; and others.

Sometimes the din and tumult die down, and what remains is lines. Ribs, spine, jaw, clavicles –
and all that is before, behind, between, above, below. Other lines, too – the road in front of you, the
trees along the hard shoulder. Your fence, your gate. The trail of your dog in the snow. And in the
summer, sheets drying in the garden. The curves of her hips and belly. The long-distance phone call.
The cheque-book, waiting to be signed.
And the trajectory you must follow. The line you will cross, now.