In late 1972 I made the journey to Leicester Square to see A Clockwork Orange. As with all Kubrick’s
films I thought the film was visually stunning and I loved the use of music throughout. The physical
and sexual violence seemed to me more theatrical than factual and I was astonished to hear a year
later the film had been banned.

All thoughts of the film had long gone when I crossed the footbridge across Yarnton Way
to Riverside School, Thamesmead in 1976. I had no idea I was entering a scene from Kubrick’s vision
of a desolate and violent Britain. My aims were simple; I was going to use the camera to show my
pupils that they were great, to show them that we were all worthwhile.

From A Guide to the New Ruins of Great Britain by Owen Hatherley:

It’s impossible to praise the original Thamesmead without caveats. There were never enough facilities, the transport links to the centre were always appalling, and the development was always shockingly urban for its outer-suburban context. Regardless, it is something special, a truly unique place. It always was, and remains so in its current, amputated form.

Unlike its successors, it’s flood-proof and still architecturally cohesive, after decades of abuse. Around Southmere lake you can see, just about, how with some decent upkeep and with tenants being given the choice rather than being dumped here, this could have been a fantastic place … This is basically a working-class Barbican, and if it were in EC1 rather than SE28 the price of a flat would be astronomical. Today it feels beaten and downcast, and it only ever gets into the news through vaguely racist stories about the Nigerian fraudsters apparently based here; but its architectural imagination, civic coherence and thoughtful detail, its nature reserves and wild birds, have everything that the ‘luxury flats’ lack.

DS:  Eddie Mirzoeff, producer of Birds-Eye View: The Englishman’s Home has brought to my attention the commentary John Betjeman wrote and narrated over aerial shots of the very beginning of the Thamesmead section of the film:
Thamesmead is to be built on Plumstead Marsh.
Another town – how human will it be?
New towns, new housing estates,
New homes, new streets,
New neighbours, new standards of living,
New financial commitments,
New jobs, new schools, new shops…
New loneliness, new restlessness,
New pressure, new tension…
And people:
People who have to cope with all this newness,
People who cannot afford old irrelevancies,
People who have to find a God
Who fits in. 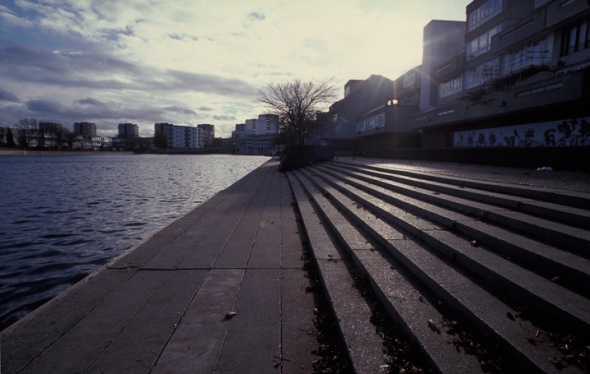 Where Alex walked … watch him pitch his droogs into the cold, cold waters of Southmere Lake here.