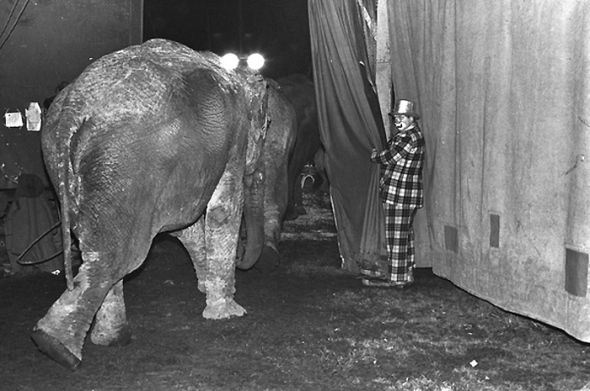 Elephants in London have a long history. Tradition has it that Julius Caesar used a war elephant during his invasion of Britannia; he and his forces pitched camp not far from modern-day Bromley, so this un-named animal might be said to be the first pachyderm to impress suburban Londoners. In the 13th century, there was an African elephant amongst the Royal Menagerie which resided at the Tower of London – a gift from Louis IX of France. Plus, there is the elephant at the Elephant and Castle – although that area got its name from an 18th century coaching inn that stood in the vicinity.

One of the most poignant stories in the bestiary of London was that of Chunee, the mad elephant of Covent Garden. This sad creature arrived in Britain from India in 1809 as a theatrical and, later circus, animal, becoming one of the city’s attractions for almost two decades: even Lord Byron took note of his dexterity and good manners. He spent his dotage in the fabled menagerie at Exeter Change in The Strand, increasingly tormented by loneliness (there was no mate to help him while the time away) and a bad tusk.  In February 1826, during his weekly parade down the Strand, Chunee rebelled against his captivity and went berserk, trampling one of his keepers in his rage.  His temper did not subside and a death sentence was passed.  The convict, however, clung on to life with the strength proportional to his body mass – almost seven tons. When they tried poisoning his food, Chunee was having none of that, and would not touch it. A troop of soldiers were sent for, yet even the fusillade from their muskets failed to kill the elephant, whose moans allegedly caused more distress than the sound of gunfire. Finally, one of his keepers ended his agony with a sword.

The elephants in Tim Marshall’s photograph are remote from the romance and pathos surrounding the death of their famous London ancestor. An impassive clown holding the curtain aside for their entrance, they take the stage with the weary docility of ageing pros. Their thick skin seems whitewashed in the glare of the stage lights. The last elephant to take to the ring can probably only sense what we are able to see: how much space there is in his wake.

These photographs where taken in Easter 1984. At that time I was a student at Central St Martins School of Art making a life changing decision to stop illustrating with a pen and to start doing it with a camera.

I spent about four days photographing Sir Robert Fosset’s Circus. I remember going to Clapham Common at 8.00 in the morning, and before the circus site was in view hearing tigers roaring and elephants trumpeting, which was very surreal in central London. I photographed the tent being put up and only realized later that, everybody worked as a team and very hard. The tiger trainer helped put up the tent, starlets of the trapeze would, after finishing their acts, sell candy floss. Clowns empted bins. The clown Nelo, was not actually that funny and quite sad. Children would laugh at him rather than with him. He was a clown whose personal life seemed to be in complete disarray. But he wanted to be loved and make people happy.

After the show, I remember that certain pubs had a ‘no travellers‘ policy, so the people from the circus were refused entrance; and in the pubs they did manage to get into, they were only allowed in to the public bar rather than the lounge.

From The Greatest Show on Earth, director: Cecil B. DeMille, 1952:

BUTTONS: I know Mother. They’ll never find me, behind this nose.

From Pagliacci by Ruggero Leoncavallo, 1892:

Clowns always make good subjects for photographers – the ‘tragic’ ones, that is, the sad clowns of popular cliché: gentle misfits of the travelling show, forever on the move, ageing into a fragile future. ‘I am Grock’ – that sort of thing. The quintessential clown photo remains Bruce Davidson’s unforgettable image of a dwarf clown in a bleak field somewhere in America. After Waiting for Godot, this image has become a different sort of cliché, foregrounding a forbiddingly grim-faced little clown against a drab urban wasteland. It’s a clown out of Beckett, a vertically-challenged Pagliacci for a nuclear world.

Tim Marshall’s clowns are a little more nuanced; for a start, they are full-size, but the gentleman who features in three out of the four pictures in this week’s series has impeccably tragic eyes – like a refugee from a silent film, we feel we know this clown’s backstory: the unfaithful wife, the vanished child, the dying mother … but it’s all conjecture, based on our cultural preconceptions and his amazing face. In a theatre or a circus tent we aren’t guaranteed a close look at the performers’ eyes – but in Tim’s portraits this gent becomes an archetype, as timeless and monumental as Nadar’s study of that ur-clown, Debureau, inspiration for the greatest film about the theatre (perhaps the greatest film about anything anywhere) Les Enfants du Paradis. We don’t have to know what this clown was like as a performer, we don’t need to see him working a Bank Holiday crowd (“the smell of wet knickers and oranges”) to decide whether or not he was any good: Tim’s picture immortalises him as one of the greats. He has the look of tragedy all about him. 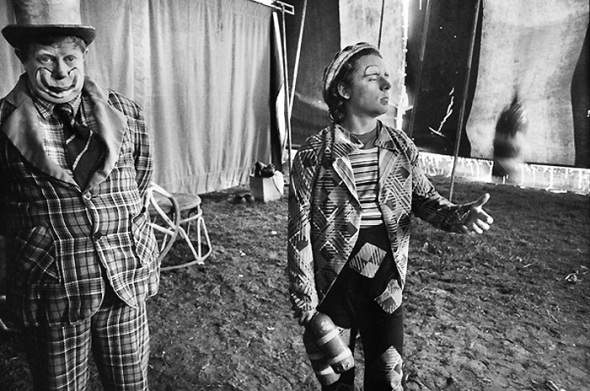 The Jingles and Joeys, Buttons and Beppos
stream, in their thousands, the dusty back roads
trudging with bindles and holes in their boot toes,
arrive in jalopies which promptly explode,

but nobody’s certain why they are here –
on the ramshackle outskirts of showbiz –
none of them has the remotest idea
who ought to feed, what, even, the joke is.

So, on they caper, cavort through the night,
dance by the light of a torched charabanc,
engaging in ever more savage pie-fights
with nail-studded slapsticks and ironwood planks.

They wake where they fell, spent and depleted,
clown-pants beshitten, all covered with flies
as Weary Willy, throwing back his head,
howls ‘We are forsaken!’ to an empty sky.