The spirit of Hackney Wick. 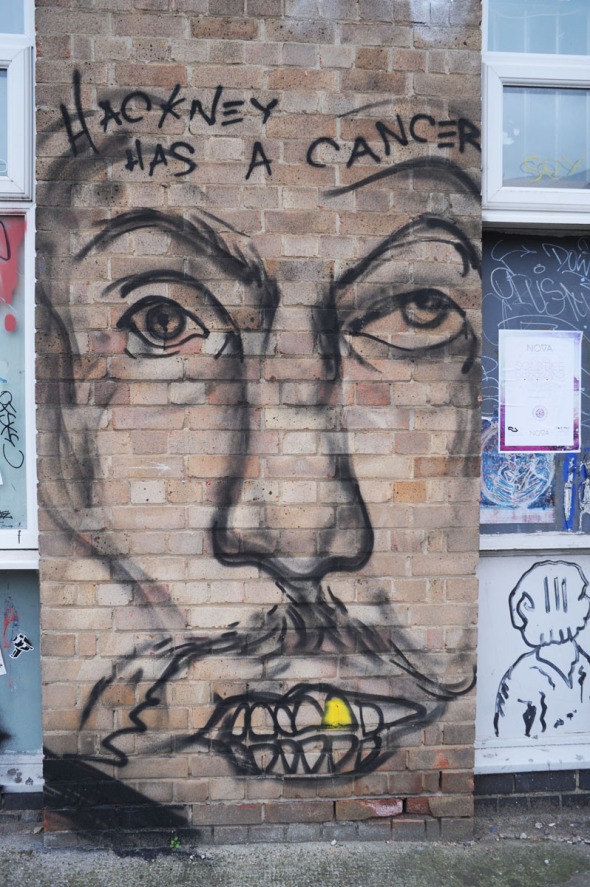 Hackney Wick – that seedy, industrial, inaccessible part of Hackney down by the river that languished forgotten for decades – is still holding onto its wasteland aesthetic. There are desolate streets, decrepit warehouses, and graffiti all over every available surface as far as they eye can see. But these days, this appearance is a choice – it’s an aesthetic – and Hackney Wick costs money. Forget what you’ve heard about Dalston, or Peckham – they’ve gone, tipped over the edge. The real hipster epicentre is Hackney Wick. 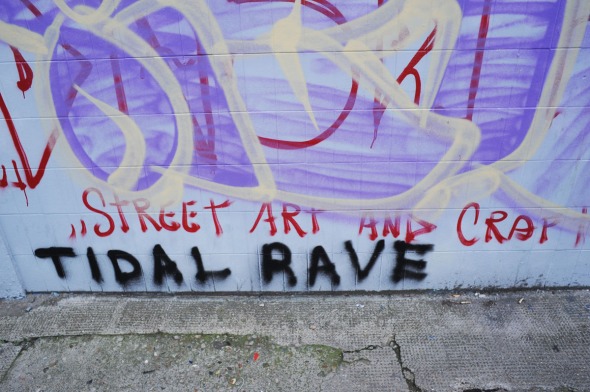 The warehouses now house bars, the vans sell veggieburgers and pastries, the air carries an aroma of artisan beer and the graffiti covering all those brick walls is just as likely to be ‘street’-style advertising as actual tagging. But it’s apparently not quite as simple as that: there’s a war being fought for the spirit of Hackney Wick, and the battleground is its brick walls. Two Sunday afternoon trips a couple of weeks apart revealed the speed with which one covers the other, and is covered again. 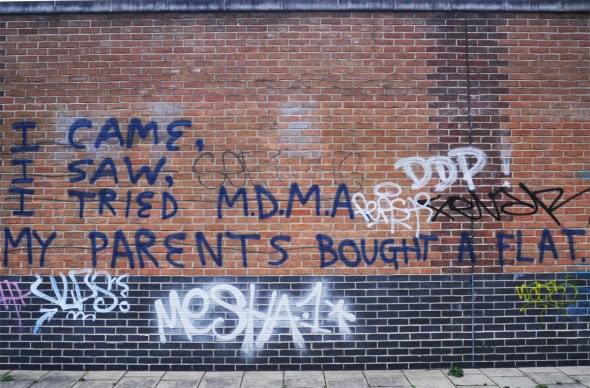 Even the graffiti brings with it the subtle but unmistakeable whiff of money. The burgers aren’t cheap. The warehouses house galleries. The labels on the single-hop beer look very similar to the pictures on the walls outside. Last weekend there was a Christmas tree seller in the middle of Queen’s Yard (apparently the epicentre of the epicentre), with trees selling for anywhere £35 to £75. 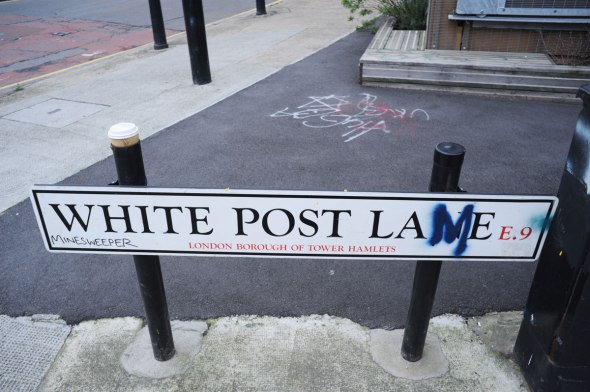 Surprisingly, or unsurprisingly, alongside the intensely calm beardy cyclist fellows, the main demographic you see is the well-dressed bourgeoisie. Walking about. Being given the tour by their offspring. Eating artisanal food. Taking photographs. Like the tall, slim, puffa-clad French family we saw the other week, heading for their Range Rover, looking round and all exclaiming at once. Your correspondents felt a pang of kinship for one person: an older, scruffier man with a toddler on his shoulders, stopped between a narrow boat that is a prosecco bar and a warehouse pizza place that offers craft beers and walnut-&-stilton pizzas, conferring with his friend and looking slightly flummoxed. 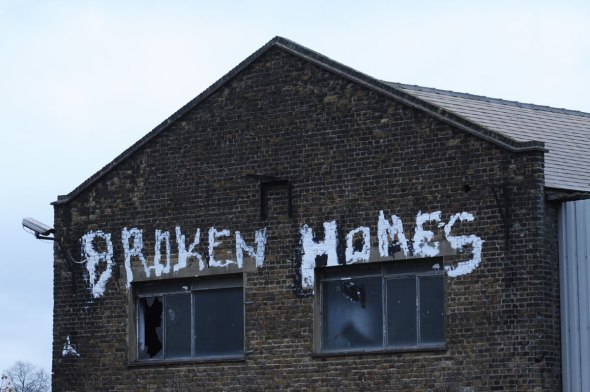 The area is ringed – that is, more or less defined – by large ‘upmarket residential developments’, smooth-faced expanses mostly with big locked gates at the street entrance. Some have well-lit interiors, personal touches visible in their plate-glass  windows, and balcony gardens; others are barren. Along the prime real estate River Lea they look across at the remnants of the Olympic Park, and down over a hotch-potch of narrow boats, whose riverine ‘broken-chairs-tarpaulins-&-cables’ aesthetic evocatively offsets the penthouses. In front of one block – its retail premises empty on the ground floor – is an old industrial chimney, standing all alone, with a plaque on it.

Near this, across from the entrance to Queen’s Yard, is a vacant lot where once stood the Lea Tavern, demolished in 2008 for reasons which are opaque; the site is overgrown with buddleia. Along the top of its hoarding (a battleground of the graffiti war) is an ambiguous and badly punctuated sign:

It is as well to remind oneself that the great thing about London – the truly great thing – used to be the way that people of all sorts shared a neighbourhood: council blocks jostled with mansions, terraces of 2-up-2-downs gave onto parks and mansion blocks onto motorways. The narrow boats have suffered over recent years with increasingly punitive rules about mooring, but they do even now offer – if you can stick the lifestyle – relatively cheap housing. And in this neighbourhood, even the tattiest canal boat has sculptures in front of it. 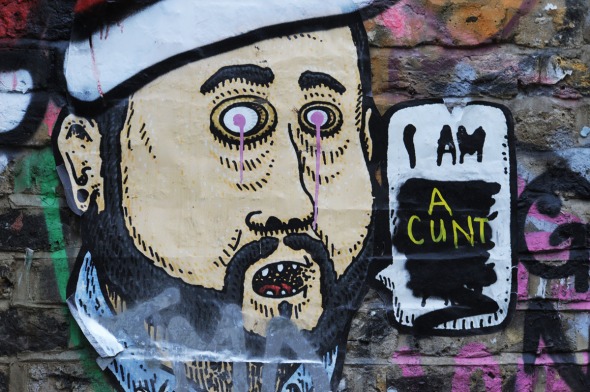 This is, in a way, still real life. Tags and posters, hipster street art and the retro, angry, non-ironic article, fight for space and fight each other (as per the re-written speech bubble emerging from the mouth of this dazed stereotype). 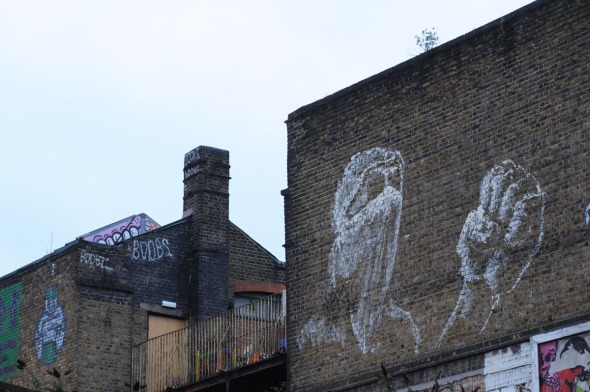 This wraith, not far from a set of ‘Sweet Toof‘s ubiquitous teeth, might be shaking his fist at a sign listing property prices. 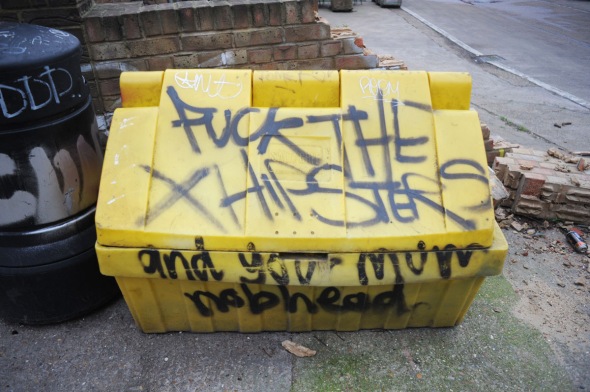 The battle lines are clearly drawn. 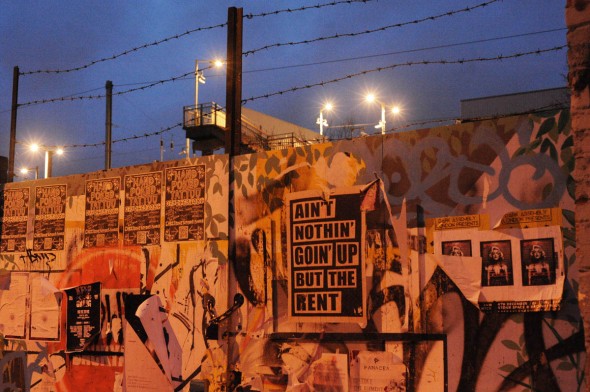 Hackney Wick station looks a bit sinister by night, but it is probably getting more traffic than ever before. The studiedly ‘urban’ look of the area gives the lie to the sanitised gloss of the recent ‘Spirit of 2012′ (though it feels fair to suppose that this look owes as much to Jean-Michel Basquiat and the iconographised dirt of eighties New York than to anything more organic); but the biggest surprise in Hackney Wick is its proximity to Stratford Westfield Shopping Centre.

Stratford, of course, was the local station for the Games, and the town centre had a massive do-over for the tourists. Facing east, looking past the couples strolling along the waterside like animated architects’ mock-ups, past the Olympic park and Anish Kapoor’s Brobdingnagian toy town tower, the backdrop for all this is a familiar, and surprising, sight. The beacon of the middle class. An unflashy, but insistent, glowing sign: JOHN LEWIS. 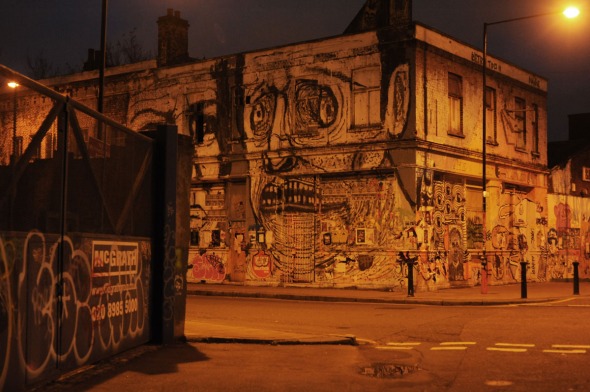 Neighbourhoods are mortal. Change is constant. The really important thing to remember is that the really big developers are already moving in. The second Battle for Hackney Wick has probably already been lost; the artists, pizzateers and canal-dwellers will be shunted to the provinces, the cute little prosecco boat will give way to a big slick floating bar where you have to book, and we will rue the day when we thought these little concrete galleries with bike racks were the actual problem, not just the symptom. And the real old London will be that little bit more lost. 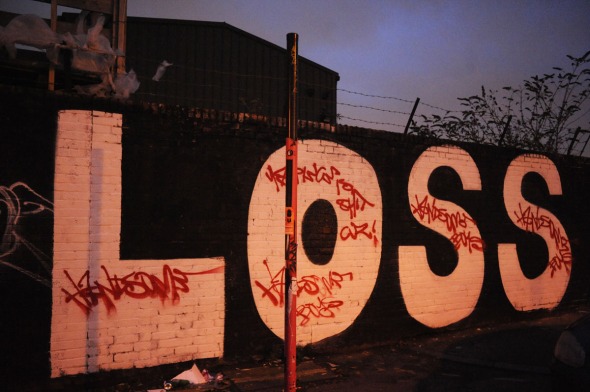 Katy’s new collection of essays Forgive the Language is published by Penned in the Margins.

See also: On the Natural History of Gentrification; Before the Blue Wall; Traffic on the Lea. 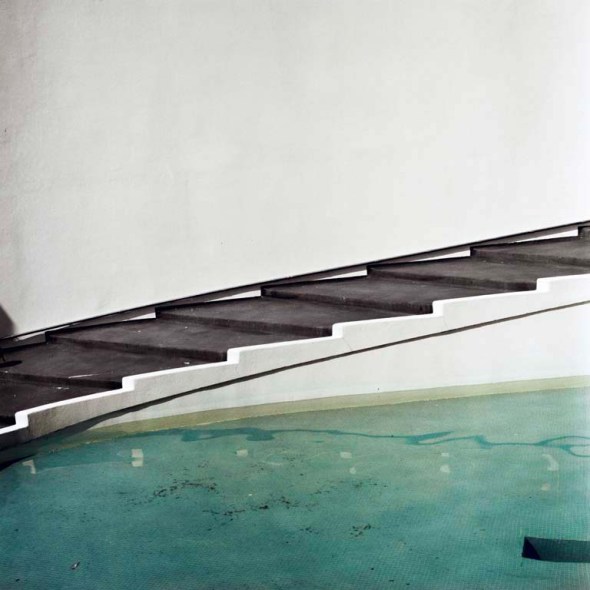 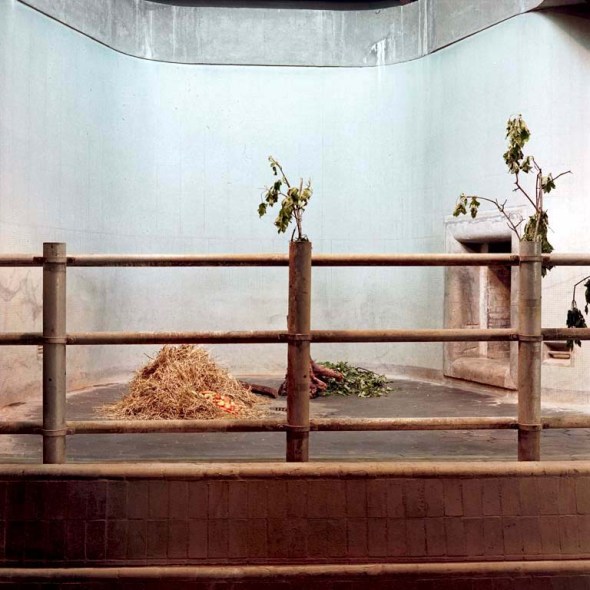 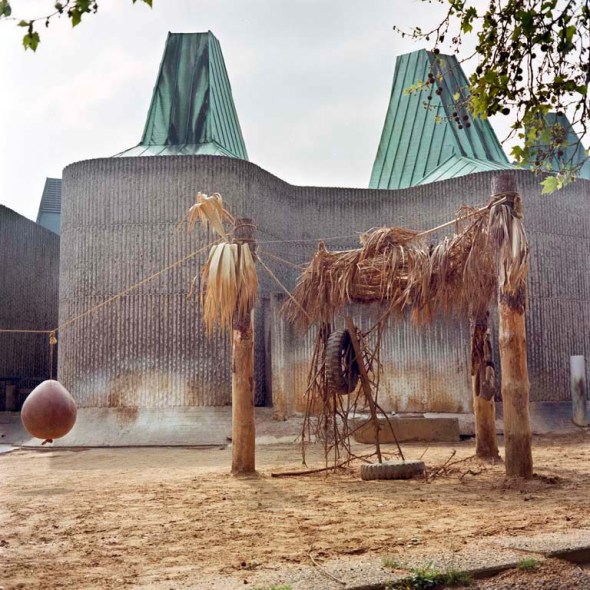