From The Fascination of London: Holborn and Bloomsbury, ed. Sir Walter Besant 1903:

Just here, where Back Hill and Ray Street meet, was Hockley Hole, a famous place of entertainment for bull and bear baiting, and other cruel sports that delighted the brutal taste of the eighteenth century. One of the proprietors, named Christopher Preston, fell into his own bear-pit, and was devoured, a form of sport that doubtless did not appeal to him. Hockley in the Hole is referred to by Ben Jonson, Steele, Fielding, and others. It was abolished soon after 1728.

The Coach and Horses pub – reflected in the mirror in the picture above – now occupies the site of Hockley Hole, one of the least salubrious entertainment venues in London’s history.  The pub rests at the bottom of a curious depression in the heart of Clerkenwell, behind the old Guardian building on Farringdon Road – which itself marks the course of the river Fleet, which Victorian engineers – eventually – paved and tamed into a churning sewer. (Supposedly, the original Coach and Horses afforded access to the Fleet from its cellars, providing Georgian fugitives with an escape route to the Thames.)  This dingy, hidden locale is a beacon for anyone of a Psychogeographical persuasion, as three centuries of real and imagined associations intersect here. We have touched upon Hockley Hole before, but a passage in Lucy Inglis’s fine new book Georgian London: Into the Streets prompted us to revisit the immediate environs. In her book, Lucy provides further details of the delights afforded by Hockley Hole (or Hockley-in-the-Hole) :

By the turn of the eighteenth century, baiting had moved north of the river – to Hockley-in-the-Hole, in Clerkenwell. In 1710, there was ‘… a match to be fought by two dogs, one from Newgate-market, against one from Honey-lane market, at a bull … which goes fairest and fastest in, wins all. Likewise, a green bull to be baited, which was never baited before; and a bull to be turned loose with fireworks all over him. Also a mad ass to be baited. With a variety of bull-baiting and bear-baiting, and a dog to be drawn up with fireworks. To begin exactly at three of the clock.’ Hockley was the centre of bull terrier breeding in London, and so perhaps it was natural that the sport would move there. In 1756, Hockley disappeared with the continuing Fleet development, and bull-baiting moved to Spitalfields. Increasingly unpopular, it was soon confined almost exclusively to market towns.

The mirror in the picture above is located on the wall of a huge industrial building (now home to one of Central St Martins design campuses) which straddles Back Hill and lower Saffron Hill. In The Fascination of London, Walter Besant quotes an earlier writer’s description of Saffron Hill as “narrow and mean, full of Butchers and Tripe Dressers, because the Ditch runs at the back of their Slaughter houses, and carries away the filth.”  Besant takes the opportunity to add that ‘in later times Italian organ-grinders and ice-cream vendors had a special predilection for the place, and did not add to its reputation’ – but he also acknowledges that ‘all this district is strongly associated with the stories of Dickens’. In Oliver Twist, set in 1838, the year it was written, Dickens describes the Artful Dodger leading Oliver to Fagin’s lair:

‘They crossed from the Angel into St. John’s Road; struck down the small street which terminates at Sadler’s Wells Theatre; through Exmouth Street and Coppice Row; down the little court by the side of the workhouse; across the classic ground which once bore the name of Hockley-in-the-Hole; thence into Little Saffron Hill; and so into Saffron Hill the Great: along which the Dodger scudded at a rapid pace, directing Oliver to follow close at his heels.’ 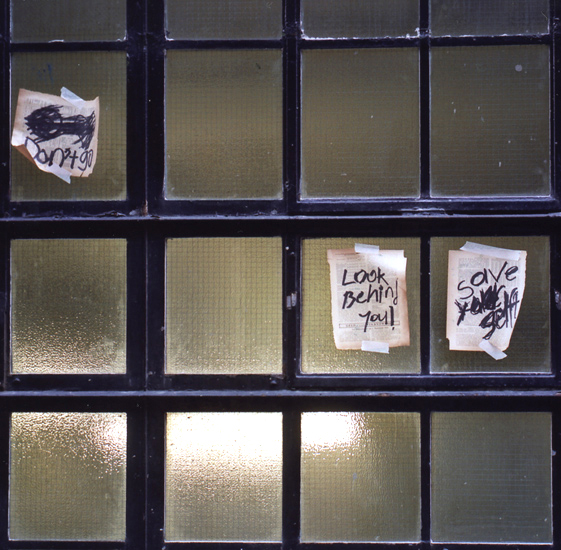 On the same turf 150 years later, a real-life match for Dickens’s characters is described by the late John Londei, a much-missed photographer, writer and contributor to this site. As John wrote in 2011:

Some people might think little Jimmy Cleary eccentric, but to me he was a walking landmark: someone whose presence brings a touch of magic to an area. Whenever I saw Jimmy I knew I was in Clerkenwell. Jimmy’s speciality was annoying motorists. He would not tolerate errant parking; his life seemed devoted to chasing drivers on from yellow lines. And woe betide anymore who ignored his orders! Bringing out a tattered notebook he took their number, and created such a commotion that the poor motorist found himself the centre of attention.

Returning to the photo at the top of this page, the modern white building in the reflection lies on Warner Street, formerly Great Warner Street. In the 18th Century, this street was the home of Henry Carey, author of  Sally in our Alley: ‘one of the very prettiest of old London love songs.’ Walter Thornbury, writing in 1878 (Old and New London Vol.2; Clerkenwell) provides this biographical snippet:

Henry Carey … lived and died at his house in Great Warner Street. Carey, by profession a music-master and song-writer for Sadler’s Wells, was an illegitimate son of the Marquis of Halifax, who presented the crown to William III. The origin of Carey’s great hit, Sally in our Alley, was a ‘prentice day’s holiday, witnessed by Carey himself. A shoemaker’s apprentice making holiday with his sweetheart, treated her with a sight of Bedlam, the puppet-shows, the flying chairs the elegancies of Moorfields, and from thence proceeding to the Farthing Pye House, he gave her a collation of buns, cheesecakes, stuffed beef, and bottled ale; through all of which scenes the author dodged them. Charmed with the simplicity of their courtship, he wrote his song of Sally in our Alley, which has been well described as one of the most perfect little pictures of humble life in the language. Reduced to poverty or despair by some unknown cause, Carey hung himself in 1743. Only a halfpenny was found in his pocket.

In the 19th century, Great Warner Street was bisected by Rosebery Avenue,a Victorian creation forming part of the general ‘ventilation’ of Holborn, clearing away many of the old houses in the area.

… for The London Column. Georgian London is published by Penguin.

Some people might think little Jimmy Cleary eccentric, but to me he was a walking landmark: someone whose presence brings a touch of magic to an area. Whenever I saw Jimmy I knew I was in Clerkenwell.

Jimmy’s speciality was annoying motorists. He would not tolerate errant parking; his life seemed devoted to chasing drivers on from yellow lines. And woe betide anymore who ignored his orders! Bringing out a tattered notebook he took their number, and created such a commotion that the poor motorist found himself the centre of attention.

I’d always wanted to photograph Jimmy. He’s an elusive person and I knew it would be difficult to persuade him. I couldn’t believe my luck when he said yes. On shoot day we picked Jimmy up in a van – he enjoyed being in a vehicle – and took him to the location I’d chosen.

I was ready to take the shot, then a car decided to go up the road where Jimmy stood, only to meet by a car coming the other way. Each refused to move, it became a stand off and Jimmy was mesmerised watching the ensuing argument.

The standoff went on for twenty minutes, the weather deteriorated and the shoot was under threat. When they’d finally settled their argument I was at last able to take Jimmy’s picture.

It’s strange how serendipity can contribute to a shot Were it not for the delay I’d have missed that moment when, fleetingly, the sun broke through a cloud, hit a bronze tinted office window across the street, and bathed Jimmy in a pool of golden light.