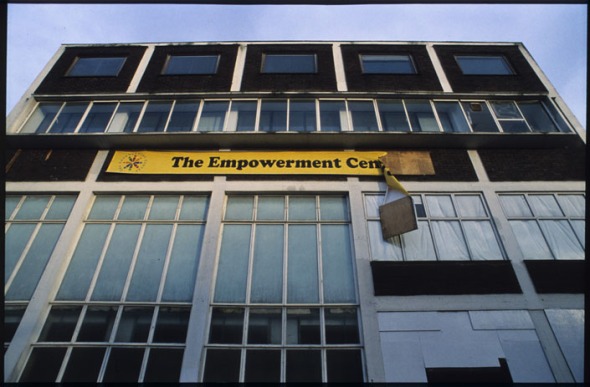 This photograph was taken on that faceless stretch of The Brighton Road which runs between Purley and the mean streets of downtown Croydon. Technically, I think we are in South Croydon – or perhaps Sanderstead. Purley Oaks maybe?  The Empowerment Centre is still listed on Internet databases as ‘a function room and banqueting centre’, but business seemed a bit slow the day I took this picture. ‘Empowerment’ is one of those words that has become tarnished through endlessly repeated misuse, and prompts thoughts of other terms that have become similarly degraded: ‘passionate’ (mandatory for politicians and CEOs); ‘celebrate’ – and its evil cousin, ‘celebrity’; ‘inclusive’; ‘accessible’, ‘iconic’, etc. These words have suffered a migration of meaning that might be said to constitute a failure of language, or perhaps its defeat.

But The Empowerment Centre’s fate seems appropriate to its location. Central Croydon is a pitiful 1960s attempt to construct an international city on the corpse of a Surrey market town. It is particularly anomalous to discover such futuristic pretensions to civic grandeur in that peculiar interzone between the South Circular (A205) and the M25: an aggregate of  20th Century suburban housing, golf clubs, retail parks, and marooned remnants of historic or industrial ‘heritage’ (there’s another one). This ‘edgeland’ has something in common with J.G. Ballard’s beloved west London suburbs, but none of their seedy glamour: the ancient village of Heathrow made way for London’s main air terminal, and the decommissioned rump of Croydon Airport –  its Art Deco terminal hall and a shabby, decorative turbo-prop airliner – is a sad and perfunctory reminder of the district’s lost prestige. The airfield – its runways too short for post-war, inter-continental passenger jets –  has long been built over, affording a misty, sylvan setting for an array of retail units.

John Betjeman’s poem Croydon evokes memories of a sweeter time, one of his idylls of lost suburban innocence …

In a house like that
Your Uncle Dick was born;
Satchel on back he walked to Whitgift
Every weekday morn.

Boys together in Coulsdon woodlands,
Bramble-berried and steep,
He and his pals would look for spadgers
Hidden deep.

The laurels are speckled in Marchmont Avenue
Just as they were before,
But the steps are dusty that still lead up to
Your Uncle Dick’s front door.

Pear and apple in Croydon gardens
Bud and blossom and fall,
But your Uncle Dick has left his Croydon
Once for all.