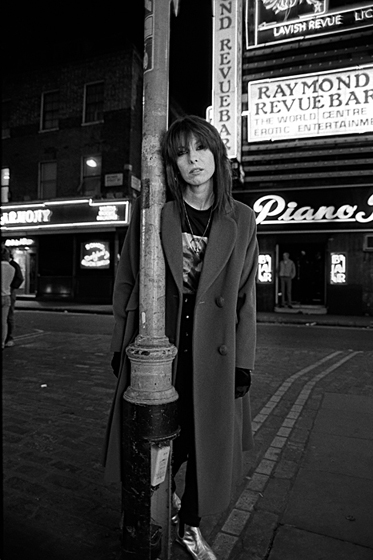 In the late ’70s I was working in an ad agency that was slap bang in the middle of Soho and through the first floor windows of said agency, we had a front seat view of the rich pageant of Soho life only a few feet below. The agency was only about 50 yards away from the passage next to Raymond’s Review Bar and we were able to observe the prostitutes, armed policemen, con men, clip girls, drunks, junkies, glue sniffers and all manner of street people. These types were very thick on the ground in the Soho of the ’70s.

One got very used to seeing some of them. There was one guy I used to see a lot. A dyed-black haired, lanky twerp, normally dressed from head to toe in leather, who obviously thought of himself as some sort of covert rock star. He also wore eye-liner. He always looked totally messed up, emaciated and completely out of it. It was not always an appealing sight. I remember being particularly appalled by seeing the lanky twerp walking through Soho market with his scrotum hanging out of a hole in his trousers. He seemed totally oblivious to this.

Working right in the middle of Soho did have it’s advantages though. My office was a 45 second jog away from the best second hand record shop in the country – Cheapo Cheapo – and every Wednesday morning, at about 11.00 o’clock, the new review copies would arrive and be put straight out into the racks. I was, by this time a voracious reader of both Sounds and NME and my heroes were Charles Shaar Murray, Nick Kent and Danny Baker.  I pretty much bought everything they gave a decent review too. So, every Wednesday at exactly 10.55, I’d make an excuse at work and run down to Cheapo Cheapo to buy, at about half the RRP, some of the records that had been favourably reviewed in the previous weeks rock papers.  I didn’t realise it at the time but there was every likelihood these were exactly the same copies that had been so reviewed. I’d often see the lanky twerp hanging about Cheapo Cheapo at about the same time as me and I assumed he’d worked out what time the review copies arrived too. I always tried to make sure I got to the best records before he did and, for some strange reason, I always seemed to.

I’d been doing this for a few years during the late ‘70s.  Until eventually I got the sack from the agency, became a photographer and I met the NME writer Cynthia Rose.  Through her, I got a crack at working for NME myself. One day when we were both hanging about Virgin Records, in Oxford Street, she introduced me to my hero, the writer Nick Kent.  And I recognised him as the lanky twerp. The very same lanky twerp that I’d seen rather too much of once before.

(And so it dawned on me that he hadn’t been hanging about Cheapo Cheapo waiting to buy the records but rather selling them the ones I’d subsequently been buying).

The above story is just an excuse to recommend Nick Kent’s fantastic book Apathy For the Devil which is a ’70s memoir of his time as a rock writer and it has some absolutely fantastic stuff about the Rolling Stones, Iggy Pop and the Sex Pistols.  It’s just about my favourite rock book since his last one The Dark Stuff. I don’t have a photograph of Nick Kent.  But his book has quite a lot about the time when he lived with Chrissie Hynde and so I’ve used a photograph of her. Coincidentally it was taken almost right outside Cheapo Cheapo.

And if you should ever read this Nick, I apologise for once calling you a twerp.

© Derek Ridgers. From The Ponytail Pontifications.