The discreet charm of the A102M. Photo & text: David Secombe. 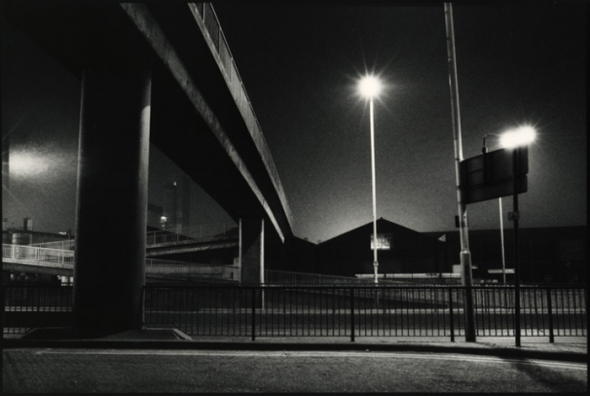 From Night Walks by Charles Dickens, from The Uncommercial Traveller, 1861:

Some years ago, a temporary inability to sleep, referable to a distressing impression, caused me to walk about the streets all night, for a series of several nights. The disorder might have taken a long time to conquer, if it had been faintly experimented on in bed; but, it was soon defeated by the brisk treatment of getting up directly after lying down, and going out, and coming home tired at sunrise. In the course of those nights, I finished my education in a fair amateur experience of houselessness. My principal object being to get through the night, the pursuit of it brought me into sympathetic relations with people who have no other object every night in the year.

The above photo was taken in just such a mood as Dickens described: unable to sleep, and with guests sleeping in the living room of my one-bedroom flat, I drove around south-east London looking for images. The sheer emptiness of the industrial hinterland of the Greenwich Peninsula was eerie and unsettling, although I took the photo above; a lambent nocturnal scene, seen from the vantage point of the ‘Tunnel Palladium‘. The stillness was unnerving and it wasn’t long before I moved on to Blackheath Village. There, whilst looking at the exhibits in a taxidermist’s window, I was interrogated by two officers from the Metropolitan Police’s Special Patrol Group. The conversation went as follows:

DS and two PLAIN CLOTHES OFFICERS in front of a taxidermist’s window. About 3 a.m.

PLAIN CLOTHES 1: Who are you then?

PLAIN CLOTHES 1: So what are you doing? We saw you walking out of that alley.

DS: I can’t sleep. I have people in my front room, so I thought I’d go for a drive and maybe take some pictures.

PLAIN CLOTHES 1: You ever been arrested?

PLAIN CLOTHES 1: Oh all right. (turns to face taxidermist’s window) What do you think of that kestrel? Clever isn’t it? Wouldn’t want it in my house though.

PLAIN CLOTHES 2: That’s not a kestrel. It’s a falcon.

PLAIN CLOTHES 2: Plumage. A falcon’s got different plumage. And a flatter head.

… for The London Column. © David Secombe.