Days and Nights in W12. Photographs and Text: Jack Robinson (4/4) 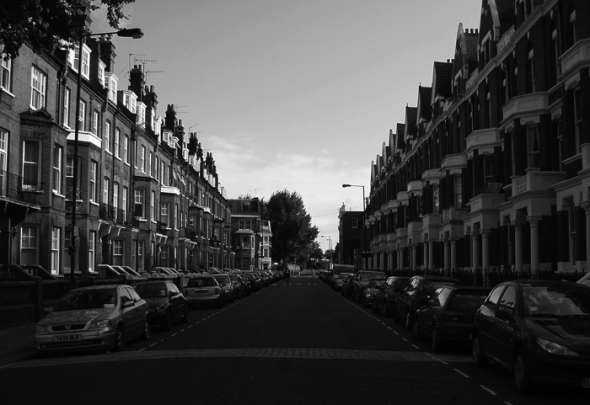 Kieran, the youngest son of a wealthy Irish family – the one who never got punished, whose shoulders were never expected to bear burdens – lived in this street in the 1970s in a house that belonged to his parents. He rented out rooms to foreign students, and there were frequent parties, and always people coming and going. He told exaggerated stories about his work and love affairs, and every few months he went back to Ireland for the peace and quiet he needed to work on his novel – which was set at the time of the Great Famine in the 1840s; or was based, with her blessing, on the life of an American film actress. The first six chapters were with an agent; the entire first draft had been lost on a train. In the early 1980s, a few weeks after IRA bombs had exploded in Regent’s Park and Hyde Park, killing eight soldiers and seven horses, Kieran’s novel was published. Crossing the Border was a political thriller set in contemporary Northern Ireland. Kieran went over to Ireland to publicise the book at a literary festival. He was seen leaving his hotel and getting into a waiting taxi, but he never arrived at the festival venue. In London his house was broken into and his diaries and files stolen. The students who had lived in his house and who were traced by the police remembered him fondly: there was something both promising and insubstantial about Kieran, as if he was always about to depart.

Days and Nights in W12. Photographs and text: Jack Robinson (3/4) 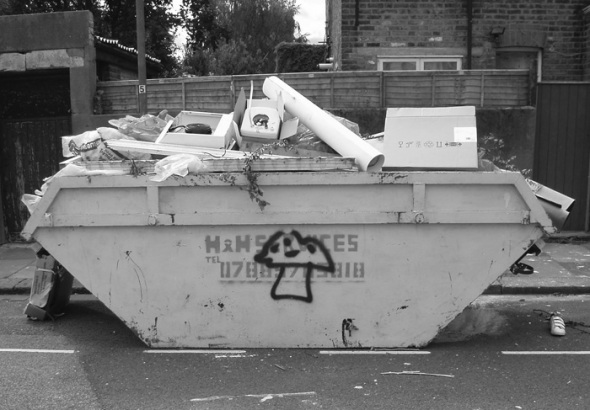 The white roll in this skip is not posters for a film that’s no longer showing or rejected samples from an advertising agency but drawings of a Macedonian girl who speaks almost no English but has a body to die for. The drawings were made by the American artist W. K. Teevald; during his month-long stay in London, where he’d come to supervise the hanging of a retrospective exhibition of his work, he checked out of his hotel and moved in with this girl, and he considers the drawings to be the best work he’s done for years. On the day of his return flight to Los Angeles the taxi he’d ordered didn’t arrive, so he loaded his bags into the only car available from the nearest minicab office. The drawings were strapped onto the roofrack. ‘No problem, mister, the Lord is good, he will take best care,’ said the driver as he yanked on the rope and knotted it. He looked about twelve years old and was grinning; he could have been making a joke, except that the Virgin Mary was stickered all over the dashboard and a crucifix dangled from the rear-view mirror. When they arrived at the airport the roofrack was bare: not even a shred of rope was clinging to the metal frame. The driver demanded twice the fare that had been agreed before they’d set out and followed Teevald into the departures hall, pleading for justice and if not justice then charity, until he was turned away by security guards.