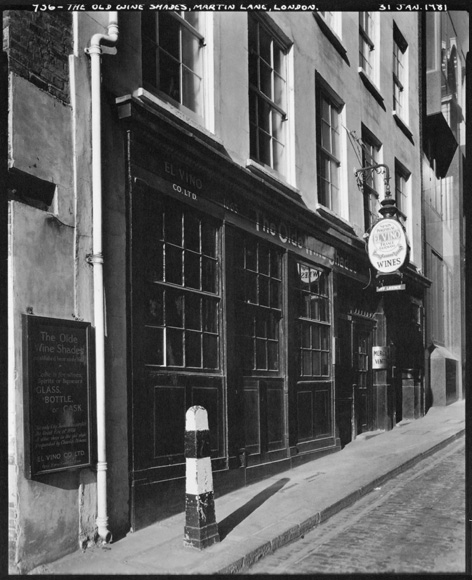 Old Wine Shades is part of the El Vino group, the venerable drinking chain that branches across the City of London. The one on Fleet Street was a legendary haunt of the local hacks in the days when ‘the Street of Shame’ was thronged with them, and El Vino’s continues to trade on its reputation as a City institution. However, an anonymous reviewer (‘A Customer’) on www.allinlondon.co.uk recently (August 2010) described Old Wine Shades thus:

A dreadful place. I work close by and El Vino’s is noted for rude staff and overpriced food and (especially) drink. On one of my few unavoidable visits (guest of others), my dining partner found a lady’s bracelet at the bottom of his coffee cup. A significantly chunky piece of jewellery. Not even an apology offered, much less anything off the bill. Basically, they trade on their historical connections and for that it’s worth a visit, but only on the way to somewhere better.

I have no idea if this is a fair assessment overall, but it poses several questions: what kind of bracelet was it? Did it have precious stones? What was it doing at the bottom of a coffee cup? Had its owner thrown it there as a protest? (surely you’d notice if your bracelet slipped from your wrist and into your cappuccino). Perhaps it was a prop left over from the filming of a romantic comedy, and the scene is easy to picture:  a lunch date goes wrong in an historic London location, Kristin Scott-Thomas chucks her bracelet – a gift from Hugh Grant – in his coffee, leaving him embarrassed as she stalks off. We’d then have a quick bit of comic business with the waiter, a star cameo from Ricky Gervais. Hugh would probably pay another visit to Old Wine Shades at the end of the film, this time blissfully entwined with Kate Winslet or Kate Beckinsale, etc., who then finds the bracelet at the bottom of her coffee cup. I am sure I’ve seen this film. D.S.