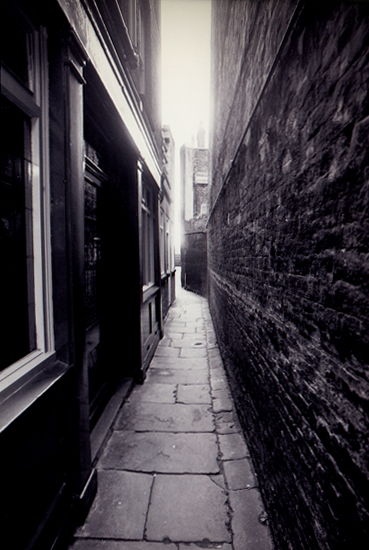 Wapping High Street in the days of Nelson’s wars possessed upwards of one hundred and forty ale-houses. In a recent perambulation I was not able to count ten. Together with these reeking drink shops, inexpressible in their squalor and dirt, were other houses of resort which one may deftly pass by without too curious enquiry. In the gloomy slum area at the back, the inner recesses of the hive, mostly dwelt the people who lived, quite literally upon the sailor, and they formed the greater part of the population that was herded here. Every tavern kept open door to welcome the mariner with wages in his pocket.

You may land at the Old Stairs still … The ‘Town of Ramsgate’ stands at the head of the Stairs, where it has stood these past two centuries or more for the refreshment of sailors. Wapping was the busiest centre of the seafaring life of the port of London. Of the many landing-places, the deserted Old Stairs and the New Stairs, nearer the City, alone survive. And you may tramp Wapping from end to end without recognizing a sailor man.

Nearly a hundred years later, Bell’s assessment of Wapping remains valid, although these days the eeriness of its riverside enclave has a particularly 21st Century quality. Wapping High Street’s narrow pavements teem with joggers: driven young (or young-ish) men and women who appear from nowhere, pounding behind you silently before speeding past towards … what? Apart from the joggers, you may see a few tourists who make the journey to visit the pubs and riverside sights, and it is undeniably true that at certain times (dusk in November, for example) the environs of Wapping Old Stairs retain an impressive  atmosphere: catnip for Dickens-fanciers armed with much-thumbed copies of Our Mutual Friend. However, in cold, hard daylight, the perfectly made-over warehouses and tastefully integrated new-build developments dispel memories of Dickens and recall instead the preoccupations of a more modern London writer: J.G. Ballard. Modern Wapping could be a starting point for one of his forensic studies of fear within insular communities, wherein the hot-house social conditions unleash perversity and violence behind the security gates of  the ‘executive development’. In the 1970s, he set such a dystopia downriver, in a tower block that might have been designed by Erno Goldfinger (High Rise); but the make-over of ‘heritage’ environments, the loading-bays transformed into penthouses, offers a more contemporary setting for a Ballardian nightmare.

Ultimately, perhaps, the unnerving quality riverside Wapping possesses today is that of a ghost seen walking in the noonday sun: the ghost of London.