← Balfron remembered.
The lights are going out all over Europe … →

From Urbanism and Spatial Order by Erno Goldfinger, 1931:

From the point of view of the town, the individual is a mere brick in the spatial order of the street or square.

Thus sprach Erno Goldfinger, doyen of the Modern Movement, Brutalist visionary, Marxist voluptuary, and namesake of James Bond’s most memorable antagonist. (The story goes that Ian Fleming was unimpressed by the house Goldfinger built for himself in Hampstead, whose construction required the demolition of some pretty Victorian cottages. In revenge, Fleming appropriated the architect’s name for 007’s next outing; Goldfinger is supposed to have considered legal action.) 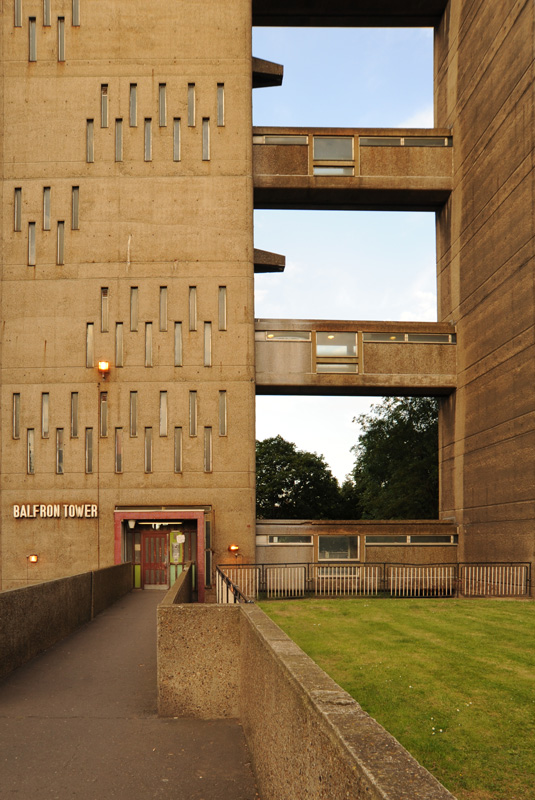 To some extent, Trellick Tower saw this narrative played out in reverse. Commissioned in 1967 as social housing for the London County Council, upon completion in 1972 Trellick quickly became a ‘problem’ estate. There was talk of demolition, it became a byword for urban grit (name-checked in The Sweeney no less) – but, facilitated by the gentrification of seedy/glamorous West London and an increased appreciation of the charms of ‘mid-century modern’, the tower gradually became a suitable address for aspirational professionals, and was Grade II listed in 1998 – two years after Balfron was. 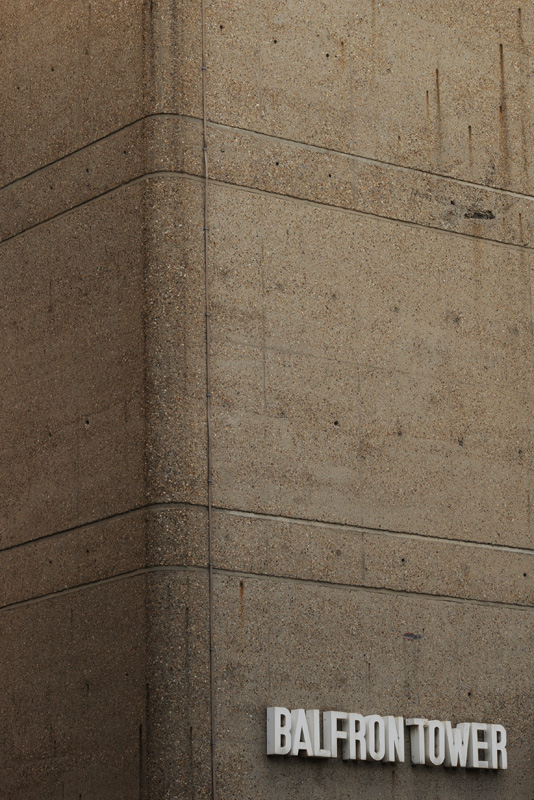 Now it is east London’s turn. Balfron appeared first, topped-out in 1967 in an environment even more forbidding than old West Kensington. The location is still uncompromising: Balfron abuts the churning A12, feeding the Blackwall Tunnel just two hundred yards to the south. This piece of civic engineering affords majestic views of Balfron from the east and south but blights the lower floors facing the motorway. Balfron’s unprecedented height, hammered concrete finish, and stand-alone service tower with flying corridors and arrow-slit windows combine to give it a distinctly pugnacious aspect. The overall impression is of an urban fortress – a building fit to shelter the last bastions of humanity against marauding zombies (a role it plays in Danny Boyle’s 28 Days Later).

Balfron and its sister block, low-rise Carradale House (also by Goldfinger), are relics of a lost civic culture. There was a time not that long ago when modernity was a form of social utopianism. The East End had been blitzed, the residual housing stock was seen as Dickensian, and a clean, futuristic solution (Le Corbusier’s Unité d’habitation in Docklands) was an irresistible prospect for the ambitious bods at the LCC.

Balfron Tower was a brave project, and it took a fearless architect to see it through. It was intended to herald a dawn of new, better housing. Its flats meander up and down different levels, and the interiors are full of sensitive detailing. Goldfinger himself spent two months living in one of its penthouse flats, to evaluate the building; this led to important technical variations at Trellick when it was built a few years later. Amongst other things, he made sure Trellick had three lists instead of just two, after finding himself waiting twenty minutes for a lift to Balfron’s 27th floor.

Faced with accusations that his building constituted social engineering, he was robust: ‘I have created nine separate streets, on nine different levels, all with their own rows of front doors. The people living here can sit on their doorsteps and chat to the people next door if they want to. A community spirit is still possible even in these tall blocks, and any criticism that it isn’t is just rubbish.’ 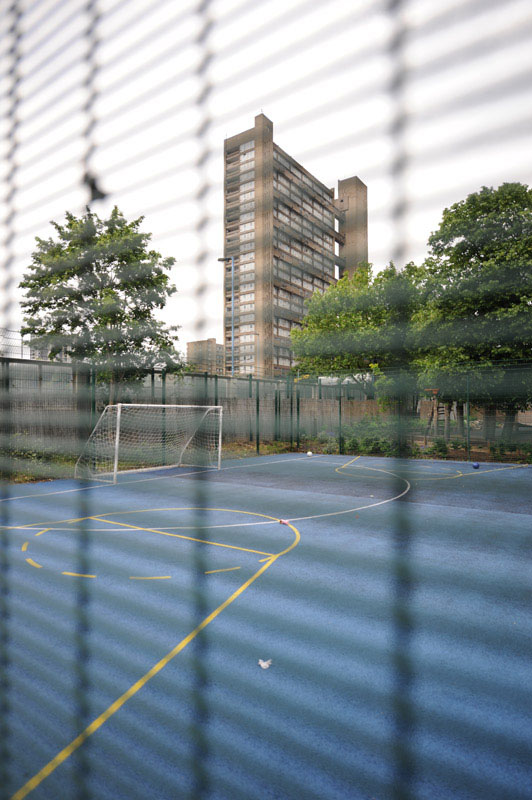 For all its elegance, sincerity, attention to detail, and integrity of construction, Balfron suffers from design flaws which mitigate the modernist dream: the lifts don’t serve every floor, concrete decay is an issue, and the uninsulated solid walls suffer from heat loss. However, the East End is being relentlessly gentrified, and Balfron is about to be transformed into a block fit for the well-heeled and design-conscious (let us call them hipsters). The old tenants have been decanted elsewhere for the works to begin, and before the tower gets its upscale makeover, Balfron has become a sort of temporary sink estate for artists – this in response to special cheap deals on the rent – who are softening the place up for a bourgeois and executive future. 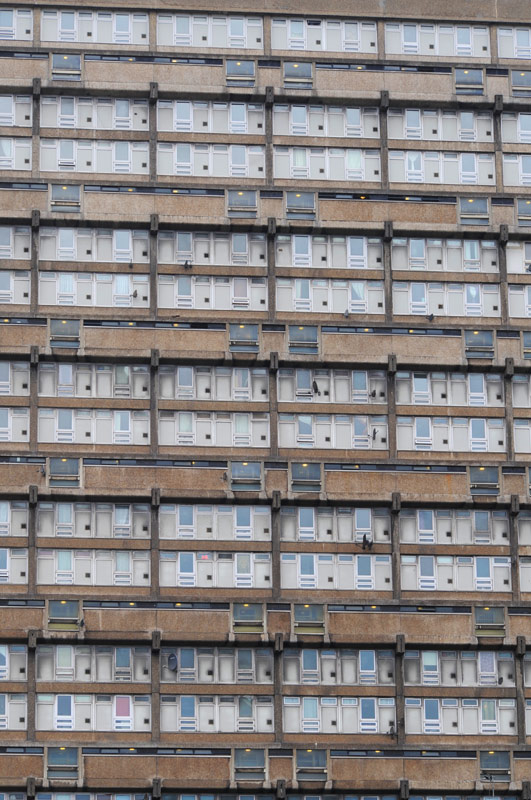 The accepted rubric is that the artists ‘inject new life into communities’; and in recent times Balfron has itself become something of an installation. In 2010 it hosted an ’empowering’ photographic project, and this year has seen, amongst other things, a site-specific production of Macbeth, not to mention a bid by a Turner-prize nominated artist to throw a piano off its roof (abandoned after protests from residents that someone could get killed).

All this corporately-licensed conceptual ‘playfulness’ masks the fact that an important piece of public housing is being very deliberately annexed by the private sector. No longer a vision of better housing for a better future, Balfron is now the deadest of things: a design icon, a beacon for those who crave tokens of retro-urbanism. Owen Hatherley has coined the term ‘Gormleyism’ to describe the use of Antony Gormley’s solitary figures as cultural embroidery in bland civic developments; perhaps ‘Balfronism’ will become shorthand for the use of artists en masse as a form of social cleansing.

iPhone triptych, Balfron Tower from traffic on the A12. © David Secombe 2014.

The patina of time makes quaint what was once brave, difficult, or merely awful. It won’t be long before ‘Ballardian’ is a term used by estate agents. D.S.