Expedition to Greeneland by Susan Grindley

There was a problem with the spellings
of Yeastrol, or Yeastrel, and Tontons Macoutes.
I was the ofﬁce junior, despatched
with marked-up galley proofs to Albany.

I washed and ironed my hair the night before,
wore my shift dress from Peter Robinson’s
new Top Shop with white stockings and white
patent shoes from Elliott’s of Bond Street.

I’d cracked the secret code to all his books –
women who thought that they were loved were not.
He kept them parked and waiting in the margins,
all that religious stuff – just an excuse.

I didn’t see him. I just left the envelope
with the top-hatted porter at the lodge.
I told them casually back at Production,
‘GG is lunching at his club today.’

Regular readers will have spotted that we have run this post before; we are running it today in memory of our dear friend Sue Grindley who died last week. The poem is from Susan’s collection New Reader, published by Rack Press.

I’ve been taking photographs in London fetish clubs since 1981.  And the occasional fetishist in other clubs since about 1978.

To the best of my knowledge, the popularity of fetishism really started in the UK in 1976 with the emergence of punk rock and the appropriation of elements of bondage and fetish wear by many of the punk era designers.  Prior to this time, people who wanted to dress in rubber and PVC had to do it behind closed doors, ordering their outfits by mail-order in brown paper parcels.

To begin with it was just a handful of people in a small dingy Soho club called Skin Two, which resided in what was, the rest of the week, a gay club called Stallions.  Skin Two was started by an actor called David Claridge.  He went on to become famous as the hand up the furry arse of TV star ‘Roland Rat’ and after his nocturnal predilections were exposed by the gutter press, he disappeared from the scene.  The atmosphere in the Skin Two club was oppressive and sometimes menacing.  Outsiders, especially ones with cameras, were certainly not made to feel welcome.  But, pretty soon, big name photographers like Bob Carlos Clarke and several others brought fetish style images into view more and things got a lot more relaxed.

By the mid-’80s PVC and rubberwear was all over fashion magazines and pop videos.  By the late ’80s/early ’90s some of the bigger fetish clubs like Submission and Torture Garden could easily attract 3000 people a night and people came from all over the world to get there.  And then some of them went back home and started their own fetish clubs.  Nowadays, Torture Garden has become very mainstream and it’s not completely unlike any other large club in any other major western city, except sometimes people are dressed very oddly.

In the early days, I got threatened with physical violence in Skin Two several times.  One guy seized me by the neck and we nearly came to blows.  A couple of women grabbed me one night and tried to drag me over to where one of the dominatrixes was waiting, whip in hand.  I had to manhandle them off me and make my getaway.  But I was clearly an outsider back then and I would never have even gotten into the early fetish clubs if I hadn’t become friendly with some of the people running them.  I know for a fact that most of the old-time fetishists resented my presence.  But it was obviously people like me that helped to publicise and promote the scene, so the people who ran the clubs have always been very welcoming.  These days you can’t move for photographers in these kind of clubs.

I’m not really sure what it was about the fetish scene that appealed to me.  I’m not a fetishist myself and don’t even really like wearing the leather trousers I’m obliged to wear in these clubs.  To begin with I had a real compulsion to photograph the way people were dressing and the amount of humour and invention some people put into creating their own, largely home-made, outfits was certainly worth somebody recording.  These days, most people in fetish clubs are wearing shop bought, off-the-peg outfits but there are still many remarkable individualists.

Nevertheless, some people say that there’s something badly wrong with any man over 30 who still wears leather trousers, whatever the excuse. In my case, they’re probably right. Exactly what that something “wrong” might be, I’ll leave you to draw you own conclusions.

Anyone who wants to know more about the fetish scene could do a lot worse than go here – http://www.thefetishistas.com/

© Derek Ridgers. From The Ponytail Pontifications. 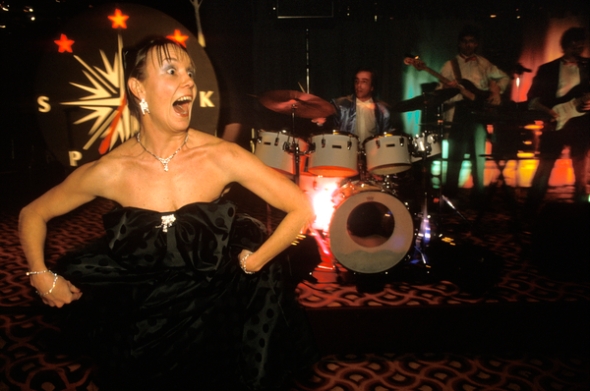 Thank you very much, ladies and gentleman. We’d like to do a Commodores number now –

I’m dancing to this. This is my FAVOURITE –Three Times A Lady –I don’t CARE about Roger. He never dances. I don’t care. I’m fucking DANCING this one ANYWAY –

Thank you very much.