Nowadays just another stop on the railway line, a part of the sprawl of outer London, Charlton has, to its great and inexplicable glory, one of the most stunning pieces of Jacobean architecture in the whole country. This is Charlton House, dating from 1607 and built for Adam Newton, tutor to Prince Henry, James I’s eldest son and heir to the throne. It is the most wonderful building, made all more wonderful by the drabness of its surroundings.

To get to it from Charlton railway station requires an uninspiring five-minute slog south on Charlton Church Lane before you reach the brow of the hill: a redbrick church – St. Luke’s – on the left,  ranks of flats on the right and in the centre, hemmed in by a car park and a stretch of lawn, a fabulous dark red brick Jacobean mansion, decorated with white stone quoins and dressings, and with a great wedding cake frontispiece, involving a huge bay window and the main entrance porch. Sir Niklaus Pevsner claimed that Charlton House contained ‘the most exuberant and undisciplined ornament in all England’; while Ian Nairn drew a metaphor – aptly enough – from Jacobean melodrama, seeing the building as ‘Sinister poetry: the Duchess of Malfi in SE7′. John Evelyn, writing fifty years after the house was built, described the view from the house as ‘one of the most noble in the world, for city, river, ships, meadows, hill, woods and all other amenities’.

At the end of Lights Out for the Territory, Iain Sinclair’s epic psychogeographical trek across London, the author visits Charlton House and ruminates upon its brooding presence and desirability as a residence for an aristocratic version of himself. Psychogeography is a much-derided concept, and it has been derided in these pages more than once (most recently by Andrew Martin earlier this week), but Charlton House is the kind of place which makes one wonder whether there might be something in it. It just seems monumentally wrong. In the midst of the anonymous south London sprawl it is spectacularly incongruous, but it isn’t just that (in fact, Charlton is the only London village where all the traditional elements remain visibly intact: the big house, the green, the church, the village).  There is something else going on.

I once made a short film in which Charlton House featured as the main location. The film was a sort of parody of the English ghost story tradition, three men holding a night-time vigil in the Long Gallery of the House in the hope of seeing ‘something’. When being shown round the building during a recce, we ascended to the Long Gallery in a conspicuously modern elevator. I expressed my surprise at such an unexpected convenience, and was told that when the lift was being installed workmen discovered the body of an adolescent boy walled up behind one of the fireplaces. How long it had been there, no-one could say.

In 1991, the BBC produced a documentary to mark Queen Elizabeth’s 40th anniversary as monarch. It was produced by the doyen of BBC documentary filmmakers, Edward Mirzoeff, famous for his Betjeman films and his editorship of the flagship 1980s documentary series 40 Minutes. I was tasked with doing the stills. The access Eddie and his small team had been given was unique, but the stills photographer had to manage as best he could, ducking out of shot (or not ducking out of shot), not treading on the sound man’s heels, and generally trying not to get fired. This picture was taken on my first day of the project, and shows the Queen having her portrait painted by Andrew Festing. The grainy, lightly impressionist tone of the image is largely a product of the fast Fuji film I used for much of the project: more a product of desperation, looking for stock that would cope with the relentlessly low levels of light, than any conscious creative decision. (‘Braille photography’ was a phrase which got used on more than one occasion.)

Stephen Frears film The Queen, featuring Helen Mirren’s acclaimed turn as Her Majesty, opens with a sequence in which the Queen has her portrait painted. The look of the sequence betrays the research the production team invested in Eddie’s film, and some of the details are lifted from the above picture (when the image first appeared, I remember being asked a lot of questions about the Queen’s silver shoes – this obviously made an impression on Frears’ team). I have heard that Stephen Frears denies ever seeing Eddie’s film. How sweet. 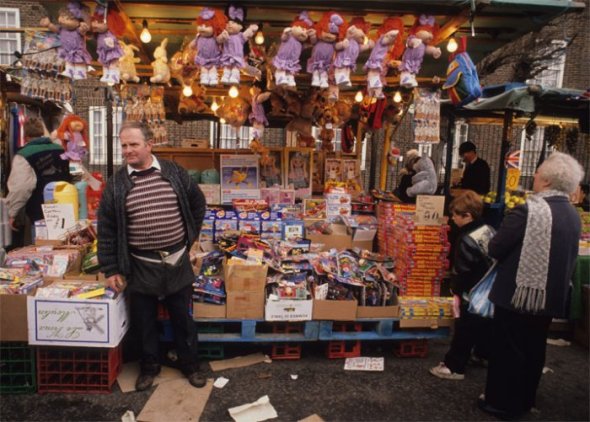 Although only officially designated a market in the 1880s, East Street Market continues a tradition of street trading in Walworth that goes back to Tudor times. Perhaps more germane to the purposes of the current post is the identification of the market with the 1980s & 90s situation comedy Only Fools and Horses, which is set in Peckham and uses photographs of East Street Market in its opening titles.

The popularity of John Sullivan‘s TV series has given this stretch of south London its own place in modern popular culture. Sullivan himself was from Balham, and he knew the milieu very well. He was working as a scene shifter at the BBC when he approached producer Dennis Main Wilson with an idea for a comedy. Main Wilson was a genuine enthusiast for comedy, a quality not always found in producers of ‘light entertainment’, and had an impeccable gift for searching out the genuine article. The idea was commissioned and became Citizen Smith.

Sullivan’s south London is a fabled place: Del and Rodney live in the mythical Nelson Mandela House (although there is a Nelson Mandela Way not too far away), the local boozer is a haunt of cartoon geezers and Peckham the bucolic playground for an assortment of genial chancers, through whom Sullivan has contributed several phrases to colloquial English. Television writers such as Sullivan and Galton & Simpson (Hancock’s Half Hour, Steptoe and Son) have created Dickensian characters for modern times, refashioning London in the image of their creations. Peckham has become Del Boy’s manor, just as any mention of Cheam conjures up the ghost of Anthony Aloysius St John Hancock – and Surbiton still bears the scars of The Good Life.

From The Caretaker by Harold Pinter:

DAVIES: I got plenty of references. All I got to do is to go down to Sidcup tomorrow. I got all the references I want down there.

DAVIES: Sidcup. He ain’t only got my references down there, he got all my papers down there. I know that place like the back of my hand. I’m going down there anyway, see what I mean, I got to get down there or I’m done.

MICK: So we can always get hold of these references if we want them.

DAVIES: I’ll be down there any day, I tell you. I was going to go down today, but I’m … I’m waiting for the weather to break.

This poignant little exchange from Pinter’s play has become so familiar that Sidcup has forever after been associated with surreal suburban promise; a place of deliverance for the pitiful tramp Davies. Pinter’s choice of Sidcup as the place of Davies’s dreams was not random: it was the HQ of the Royal Artillery during the post-war period, so Pinter is implicitly giving Davies a military history. Not that it matters: the choice of the bleak Kent suburb of Sidcup as a land of milk and honey is as cruelly inappropriate as Eric Idle’s appropriation of Purley as a hotbed of vice in Monty Python’s ‘Nudge’ sketch.

According to Michael Billington, Pinter based the play on scenes he witnessed at a house in Chiswick where the author and his young family were living in the late 1950s. The landlord’s brother – Austin – was the caretaker of the flat the Pinters were renting, and one day:

“Austin brought a tramp he’d met in a cafe back to the house and the tramp stayed for two or three weeks. Pinter knew the tramp very slightly and then one day he looked through an open door and saw Austin with his back to the tramp gazing out into the garden and the tramp busy putting stuff back into some kind of grubby hold-all, obviously being given his marching orders. All this matters because it then becomes the bones of the plot of The Caretaker.” (Pinter at the BBC)

It is rather pushing it to suggest that the gent in the above image has anything to do with Harold Pinter, but my encounter with him had a Caretaker-like quality. I was wandering around Parson’s Green, killing time on a cold afternoon before an appointment on the west side of town, when I was accosted by the man in the hat. He spoke to urgently me at some length; it could have been a request for money, for a cigarette, or just for attention, but I could not understand anything he said. Finally, I produced out my camera and took his picture, prompting him to move off. Having lost interest in soliciting my company, he went and urinated on a tree. A small, authentic London encounter.
… for The London Column.