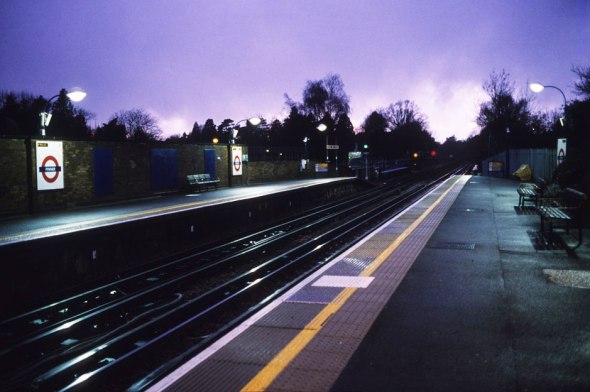 From Murder at Deviation Junction by Andrew Martin*:

‘Londoner,’ said Bowman, shaking his head, ‘born in some tedious spot like … I don’t know… Pinner’.

From Pennies from Heaven by Dennis Potter:

Today marks the 150th birthday of The Tube – and for The London Column’s modest contribution to this anniversary I would like to draw our readers’ attention to the BBC4 repeat at 10 pm tonight of TLC contributor Edward Mirzoeff’s classic 1973 documentary Metro-Land, written and presented by John Betjeman.  For anyone that hasn’t seen it, this film is a glorious relic of the golden age of the British television documentary, and takes as its subject the early 20th Century suburbs that grew up alongside the Metropolitan Line as it extended deep into rural Middlesex. As the poet laureate of inter-war suburbia and the Met line in particular, Betjeman is the ideal tour guide for this trip from Baker Street to Neasden, Wembley, Harrow, Pinner and beyond.

Pinner is the quintessence of inter-war residential development: serried rows of polite, cheerful villas and semi-detached houses spreading outwards from the remnants of an ancient hamlet. So whilst Pinner Village contains some very old houses indeed, the Metropolitan Line is the reason we are here: Met Line trains from Pinner station take just 25 minutes to reach Baker Street. Pinner’s tidy crescents and avenues were intended as havens from the dirt and clamour of the city – with desirable residences, clean air, the Met Line to take you into town, and the shops and cinema of the new parade just a few steps away, what more could life offer? Naturally, Metro-Land’s quasi-rural calm came at the expense of Middlesex’s actual rural landscape, which entirely disappeared beneath the streamlined semis, but this is a very English approach to Moderne living (as opposed to Modernism, which the British didn’t exactly take to their hearts) – tidy, domesticated, and hungry for acreage. Metro-Land is not so much a place as a state of mind, a dream of what life might be; a bucolic idyll with all the benefits that the Tube, the ring roads, the wireless and state-of-the-art plumbing could bring.

But the near-identical streets of Pinner, Eastcote, Ruislip, Rayners Lane and their neighbours are also an expression of a state of unease. The cosy, complacent sprawl of these suburbs comes at a price. The new suburban landscape goaded and inspired Betjeman (‘Your lives were good and more secure/Than ours at cocktail time in Pinner’), as it did George Orwell (Coming up for Air), Louis MacNeice ( ‘But the home is still a sanctum under the pelmets’), Graham Greene (‘a sinless, empty, graceless, chromium world’), Patrick Hamilton (The Plains of Cement) and other writers of the period. They saw fear behind the Deco stained glass. In Dennis Potter’s 1930s-set masterpiece Pennies from Heaven, his doomed travelling-salesman hero Arthur Parker lives in just such a suburb, and oscillates between a joyous fantasy life and an actual life of frustration and anguish. Metro-Land is a perennially vanishing landscape of promise. Close the windows and draw the curtains, a storm is coming.

* You can read Andrew Martin‘s hymn of praise to the Tube here – and buy his wonderful history of same here. 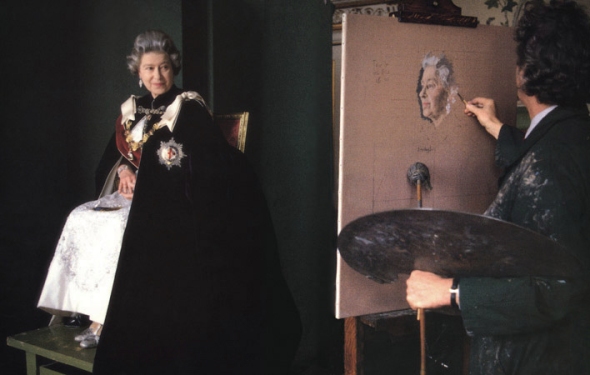 In 1991, the BBC produced a documentary to mark Queen Elizabeth’s 40th anniversary as monarch. It was produced by the doyen of BBC documentary filmmakers, Edward Mirzoeff, famous for his Betjeman films and his editorship of the flagship 1980s documentary series 40 Minutes. I was tasked with doing the stills. The access Eddie and his small team had been given was unique, but the stills photographer had to manage as best he could, ducking out of shot (or not ducking out of shot), not treading on the sound man’s heels, and generally trying not to get fired. This picture was taken on my first day of the project, and shows the Queen having her portrait painted by Andrew Festing. The grainy, lightly impressionist tone of the image is largely a product of the fast Fuji film I used for much of the project: more a product of desperation, looking for stock that would cope with the relentlessly low levels of light, than any conscious creative decision. (‘Braille photography’ was a phrase which got used on more than one occasion.)

Stephen Frears film The Queen, featuring Helen Mirren’s acclaimed turn as Her Majesty, opens with a sequence in which the Queen has her portrait painted. The look of the sequence betrays the research the production team invested in Eddie’s film, and some of the details are lifted from the above picture (when the image first appeared, I remember being asked a lot of questions about the Queen’s silver shoes – this obviously made an impression on Frears’ team). I have heard that Stephen Frears denies ever seeing Eddie’s film. How sweet. 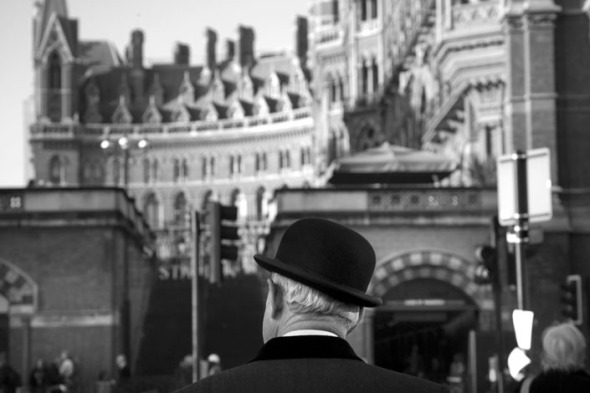 “For the last ninety years almost, Sir Gilbert Scott has had a bad Press. He is condemned as facile, smart, aggressive, complacent and commercial.When at the top of his form Scott was as good as the best of his Gothic contemporaries. He was so firm a believer in the Gothic style as the only true ‘Christian’ style – Scott was a moderate High Churchman – that he was determined to adapt it for domestic and commercial purposes. St. Pancras Station hotel was his greatest chance in London and well he rose to the occasion.

I used to think that Scott was a rather dull architect, but the more I have looked at his work the more I have seen his merits. He had a thorough knowledge of construction, particularly in stone and brick. For St. Pancras the bricks were specially made by Edward Gripper in Nottingham. The decorative iron work for lamp standards and staircases and grilles was by Skidmore of Coventry, who designed the iron screens in some English cathedrals for Scott. The roofs of the hotel are of graded Leicestershire slates; the stone comes mostly from Ketton. Scott’s buildings are so well-built they are difficult to pull down. He had a grand sense of plan and site. The Grand Staircase, which alone survives of the hotel’s chief interior features, ascends the whole height of the building, by an unbelievably rich cast iron series of treads with stone vaulting and painted walls. The chief suites of rooms are on the first floor and the higher the building, the less important the rooms, until the quarters for the servants are reached in the gabled attics – men on one side, women on the other – and separate staircases. Yet even these are large and wide and compare favourably with more modern accommodation. The building has been chopped up and partitioned inside for offices. It is odd that it is not used again as an hotel especially now that hotels are so badly needed in London.”

Not long after this book was published I approached British Railways proposing a BBC documentary on London stations, with Betjeman. BR insisted on charging a facility fee at the same daily rate as that for feature films – which killed the idea, doubtless as intended. 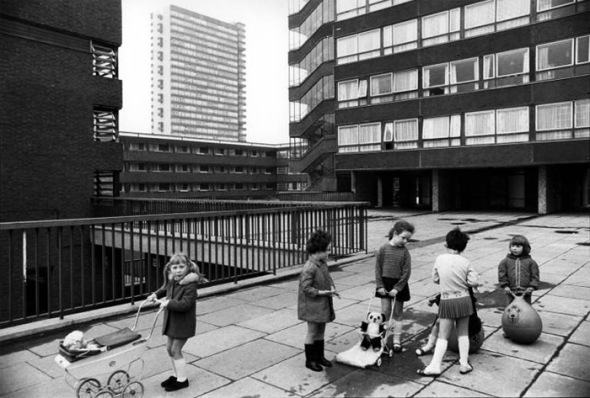 Bird’s-Eye View was a pioneering series of 13 films shot entirely from a helicopter. For the first of these, The Englishman’s Home (BBC2 5 April 1969) John Betjeman wrote in the commentary about the new high-rise blocks. At the time his strongly-felt views were very much against progressive liberal thinking on the subject, and what he wrote was attacked and derided. By now most people have come round to his old-fashioned but humane way of thinking.

Betjeman refused to fly in the helicopter, but wrote his commentary, in verse, over weeks in the cutting room, once the picture-editing had been completed.

[Edward Mirzoeff was the producer of Bird’s Eye View.]

Where can be the heart that sends a family to the 20th floor
In such a slab as this. It can’t be right, however fine the view
Over to Greenwich, and the Isle of Dogs.
It can’t be right, caged halfway up the sky
Not knowing your neighbour, frightened of the lift,
And who’ll be in it, and who’s down below
And are the children safe?

What is housing if it’s not a home?”

[Tony Ray-Jones was one of Britain’s finest photographers, whose early death – at just 30 – in 1972 robbed us of an artist of acute insight and integrity. His book A Day Off is celebrated as one of the definitive post-war photographic studies of British life, and influenced a generation of native photographers, not least Martin Parr whose early work showed an obvious debt to Ray-Jones. Until I went searching for means of contacting the Ray-Jones estate, I was unaware of his work for Architectural Review in 1970: a total of 138 pictures that are now in the RIBA photographic library. These are images of the impact of modern housing, and he responded to the brief with characteristic power; he seems to have been especially engaged with the London subjects –  Deptford, Thamesmead, the Old Kent Road, etc. – and some of these pictures are the equal of his better-known work. The London Column will be running a further two images from TRJ’s series on the Pepys Estate later this week. Special thanks to Robert Elwall at RIBA Library Photographs for allowing us to reproduce them here. D.S.]