Traffic on the Lea. 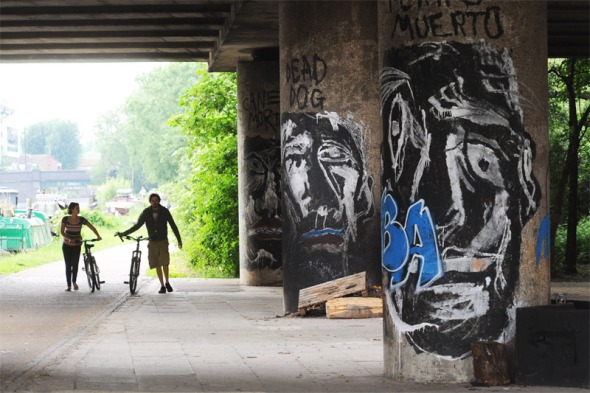 A Sunday in May, on the towpath by the River Lea, just south of Lea Bridge Road:

The cyclist (mid-20s, jutting beard, sickly smile, deeply hittable face) steered his vintage eBay treasure inches between myself and my young son. Fifteen minutes into what was supposed to be a leisurely Sunday outing on the first really sunny weekend of the year and I was reduced to hissing violent epithets at various types of cyclist. Hipster cyclists, as above; Spandexed cyclists, often in entire family groups; unnervingly swift and purposeful cyclists with business on their minds; kids on mountain bikes; even a brace of fancy-dress cyclists, decked out in Edwardian gear – bowlers, waistcoats, plus-fours, spats – on authentically recalcitrant machines. Whatever their costume, they were all united by their fondness for those little silver bells, their peremptory tinkle an indication of assumed moral right. As a pedestrian on the towpath, on the Lea or a London canal, it’s hard to avoid the feeling that cyclists see you as merely a car-driver deprived of your vehicle. (Suggested collective noun: an entitlement of cyclists.) 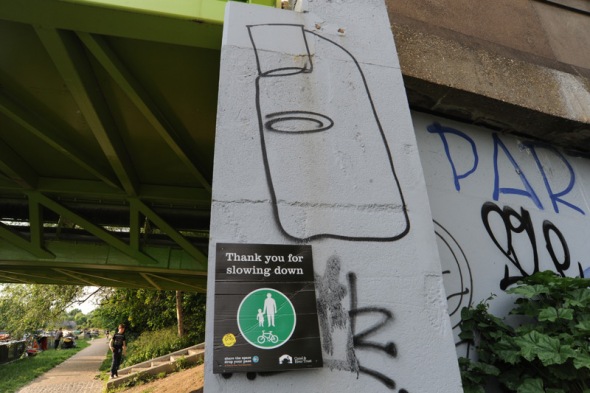 Not that long ago, this stretch of the Lea was a backwater; and the landscape still offers those with a taste for brownfield-rural the opportunity to participate in an Ian Sinclair-ish topographical narrative in a lush setting. There are overgrown meadows, deserted municipal sports facilities, mysterious structures to negotiate, structures often covered in an abundance of picturesque graffiti (whilst photographing the uncharacteristically polite cyclists walking their bikes under the East Cross Route, I noticed a young man posing his girlfriend for snaps on the other side of the decorated pillars). Of course, this riverside has been ravaged in recent years by the Alphaville of the Olympic Park, and the new residential developments that line the western bank south of Lea Bridge are testament to the burgeoning popularity of East London-lite: Hipster London, Foxtons London, Fatuous London. 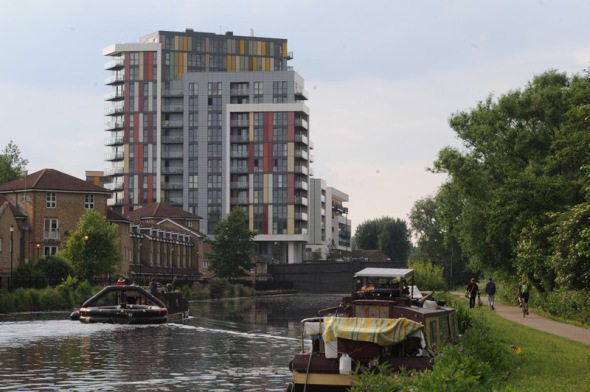 Yet somehow, the houseboats remain aloof from it all; and the beauty of the Lea leads to daydreams of buying one, the idyll of having your very own piece of river within (distant) earshot of the churning city. A friend of mine has his own boat, a proper sea-going job, which he occasionally sails from Lowestoft to Limehouse Basin, where he moors it as his London base. This always struck me as simultaneously butch and civilised, an impression only slightly marred by a desperate call I once received from him en route, somewhere near Sheerness, asking if I’d heard the Shipping Forecast because his radio was broken. Several of the vessels moored on the Lea have all the appurtenances of the riverside ‘luxury apartments’ touted by Foxtons and their ilk, and it is not too exotic to imagine some of them actually sailing somewhere. A London houseboat might be the nearest thing to bucolic living anywhere within the M25; but a cursory inspection of some of the more ramshackle examples give one pause. More than a couple appear to be actually sinking, invoking thoughts of Viv Stanshall’s houseboat foundering on the Thames near Chertsey. A houseboat is not a very safe place to store a life’s work, and much of Viv’s life sank with The Searchlight. Even if your boat is watertight, there are other dangers: Malcolm Hardee drowned in Greenland Dock during a drunken attempt to access his houseboat after a night out. (Eddie Mirzoeff has just pointed out to me that Penelope Fitzgerald’s Chelsea Reach-moored houseboat sank not once but twice in the early 1960s, inspiring her Booker Prize-winning novel Offshore.) 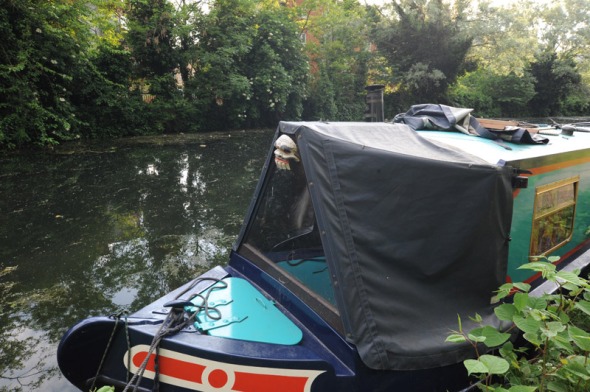 Still the temptations persist … walking south, we encountered a riverine barbecue-cum-jam session, two barges lassooed together, a party of expert folk musicians playing together in an atmosphere of easy familiarity and home-brewed ale. I’m generally allergic to the claims of folk music but even I was charmed and wondered whether the water offered a better way of life for those in the know … but only a few yards further south, jungle was being played at industrial-noise level from a flat in a new block, obliterating the reels from upstream and putting paid to idyllic wonderings. Any remaining notions of hippie-ish promise were soon trashed as we reached the East Cross Route, where the aggressive post-Olympic new builds proved demoralising enough for us to turn back. Perhaps there is no such thing as a backwater in London any more; a sage with a tin of spray paint helped articulate this thought by stating the obvious on a bridge … 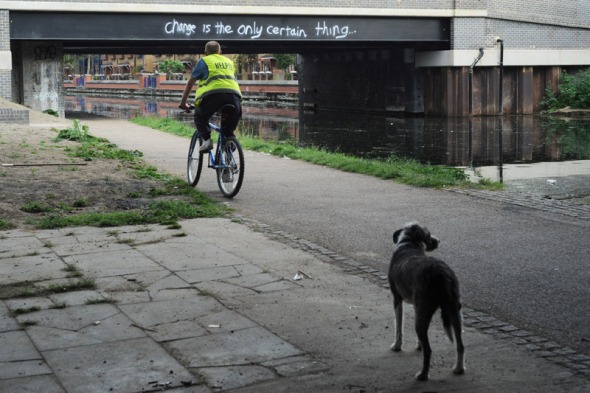 Back at Lea Bridge, the Prince of Wales was doing brisk business as football played on the TV. A massive new development is under construction on the north of the Lea Bridge Road. For real peace, you have to go further upstream, way beyond Springfield Park and up into Tottenham Marshes; if you moored there, maybe you would have a shot at a life of tranquility. If you saw a naked cyclist, it would be someone who did it every day. And that would be fine. Just an unpretentious houseboat, not too big, easy to manage through the locks, kitted out with obsolete technology – VHS tapes, audio cassettes – and overflowing with old paperbacks you could read by paraffin lamp. You know where to find me … 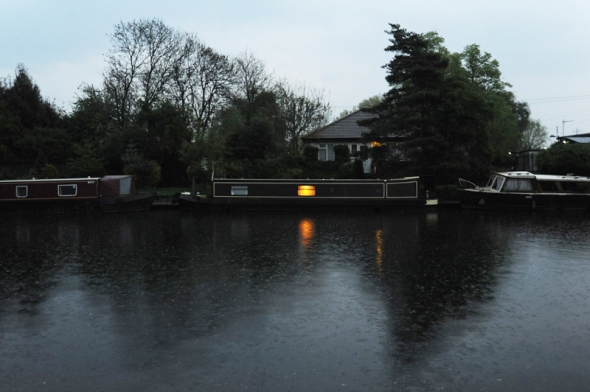 See also: Before the Blue Wall. 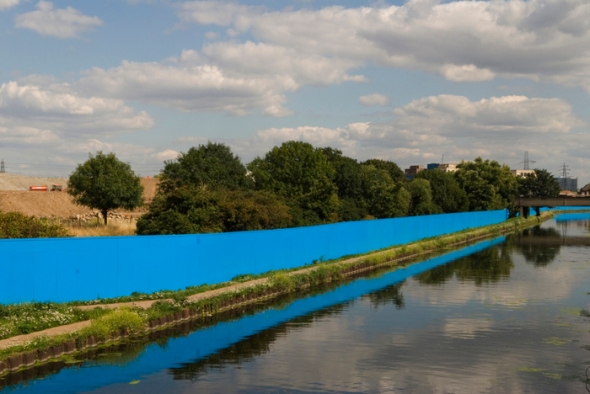 This week we are featuring a few of Homer Sykes’s images of the  Lea Valley immediately prior to its transformation into the 2012 Olympic ‘zone’.

In 2006, searching to record for posterity a neglected moment in time, Homer made it his personal mission to explore the future site of the Olympic Park – soon to be encircled by a barrage of hype, and by the anonymous and blandly forbidding Blue Wall. Indeed, the blue wall shown in the picture above was the most visible token of the impending funfair – and it served as an unwittingly potent symbol of loss. In these images, Homer shows what was there before: a curious mix of wildflower meadows alongside neglected sports fields, semi-derelict 19th century industrial buildings sprawling cheek by jowl with unidentifiable dwellings cloaked in ivy – an almost rural atmosphere emanating, against all odds, from the urban blight.

Cities are organic entities, and London has, traditionally, ebbed and flowed as entire districts go in and out of fashion, or are repurposed in the light of changing circumstances. Elsewhere on The London Column, we have railed against the imposition of corporately-sponsored ‘Regeneration’ schemes upon areas that have developed their own post-industrial ecosystems: those intriguing backwaters where town becomes wilderness. Sadly, these romantic urban oases are too easily seen tabula rasa for this or that grand scheme – which are invariably sold in as a boon to the local community. But one only has to look at the dislocated, dystopian landscape of ‘North Greenwich’ to see what happens to an event site after the event has gone.

Homer will be presenting a slideshow of images from Before the Blue Wall at the Green Lens Gallery, 4a Atterbury Road, London N4 1SF, on Wednesday 11 July between 6 and 9 pm. Homer’s website is here.