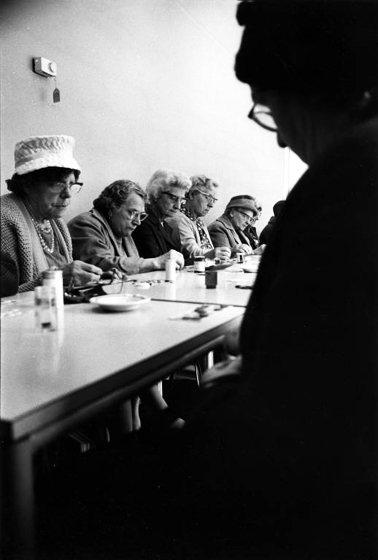 In 1969 Hubert de Cronin Hastings, owner of the Architectural Press and editor of its leading journal, the Architectural Review, decided to experiment with a new look for the magazine. He accordingly launched the ‘Manplan’ series published in eight themed issues between September 1969 and September 1970. Rather than being illustrated by the Review’s usual staff photographers, Hastings commissioned photographs from some of the leading photojournalists of the day asking them to cast their lenses in judgement on the contemporary state of architecture and town planning. Thus Ian Berry illustrated two issues on communications and health and welfare while his Magnum colleague, Peter Baistow, also supplied the images for two, those on religion and local government. Other contributors were Tom Smith on education; Tim Street-Porter on industry and Tony Ray-Jones on housing. The series kicked off with a typically hard-hitting issue on ‘Frustration’ with photographs by Patrick Ward.

These images were totally unlike anything that had been seen in the Review before. Ironically the Review had done much to formulate the norms of mainstream architectural photography with dramatically hagiographic renditions of pristinely new buildings set beneath sunlit skies and photographed with large format cameras. Instead it now offered its readers harsh, grainy, 35mm images of a grimly dystopian world the photographers argued that architects and planners had created.  The unrelenting grimness and claustrophobic intensity of the photographs was magnified by the use of wide-angle lenses which had the effect of thrusting the viewer into the frame; by the reproduction of the photographs in a specially devised matt-black ink; and by the provision of hard-hitting captions that sometimes were printed over the images. Not surprisingly the series proved too much for many of the Review’s architect subscribers and in the face of falling circulation figures Hastings was forced to admit defeat and abandon his experiment.

Despite being short-lived, ‘Manplan’ can be regarded as the high watermark of photojournalism applied to architectural photography. During the 1960’s this had been pioneered by magazines such as Architectural Design, which in September 1961 had published a special issue on Sheffield illustrated by the great photojournalist Roger Mayne and by photographers such as John Donat (1933-2004) who, much influenced by Mayne’s example, took advantage of the smaller format cameras and faster films then appearing on the market to show how buildings interacted with, and were experienced by, their users and the public. For so long banished from the architectural photographer’s frame, real people going about real tasks, rather than merely included to give a sense of scale, now became the norm. By the 1970s, however, this application of the tenets of photojournalism and street photography to architecture was drawing to a close. There were two main reasons for this. Firstly, owing to the slow speed of large format colour films and the elaborate lighting set-ups they often required, the explosion in colour photography placed a renewed emphasis on architecture’s more formal qualities at the expense of human activity. In addition the increased commissioning of photography by architects themselves rather the more independently-minded magazines inevitably premiated eye-catching imagery that would show architects’ works in the best light. However, it is pleasing to reflect that today ‘Manplan’ has found favour once again as photographers once more seek to deviate from the norms. 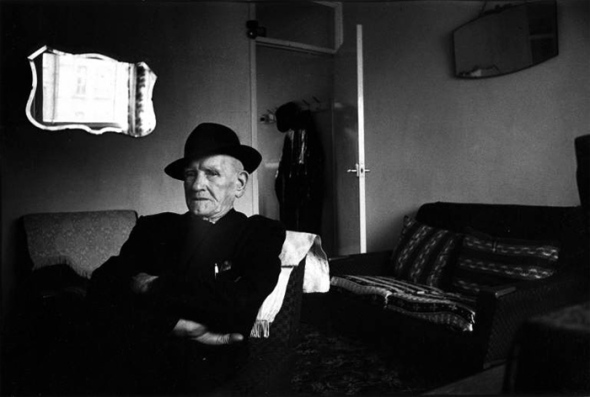 Like a lot of council estates that have been subjected to the ministrations of ‘regeneration’, there are certain myths about the Pepys Estate. Each has a grain of truth, each covers up what ought to be a larger, more overwhelming truth.

My own experience of the place is fairly limited. I recall walking there from a flat in the centre of Deptford to hand in my form for the council waiting list; on a few other occasions I would wander over to use the bridge that connected the estate to Deptford Park, just for the fun of it, for the fact of its mere existence. The place seemed quiet during the day; I only saw it at night as the N1 bus looped around it. So I can’t offer much insight into what it was ever like to live there, but I have watched the material transformations of the place over the last decade or so, and watched the media discourse around it spin its web.

The Pepys is often presented as a monolithic, monstrous estate that was a failure from day one. Which is interesting, as the place marked one of the earliest council schemes to preserve as well as demolish – the little enclaves of Georgian nauticalia that mark the estate’s edges were part of the scheme, renovated and let by the council as an integral element, by now surely long since lost to Right to Buy. The rest of it is, or rather was, a series of jagged, mid-rise blocks connected by walkways, enclosing three towers and a large open space, with the bridges eventually leading to a park on the other side of Evelyn Street. In the middle is a community building with a bizarre, expressionist roofline seemingly partly based on oast houses (but then, so is Bluewater).

What is undoubtedly true is that parts of it were badly made – the lifts were apparently prone to breakdown from extremely early on. The draughty blocks were clad in plasticky white material at some point in the 1980s. Yet what happened when the place got ‘regenerated’ is by far the most dramatic aspect. The open space went, with low-rise flats to be sold to ‘key workers’ and on the open market taking an already highly dense area and making it more so. This accordingly makes it more ‘mixed’, ‘vibrant’ and ‘urban’, as professionals now live alongside – well, not quite alongside, but at least near to, council tenants.

The bridge over Evelyn Street went also, with remarkably clumsy ‘eco-flats’ (you can tell this, because the extra layer of curved glass on the façades a few feet from the actual windows could surely have no other possible functional justification) built where it met the park. This ‘recreated a street pattern’ in the area according to planning ideologists; or it defaced an area of public space. As you wish.

The new blocks are regeneration hence good, the old are council housing hence bad. Yet the council flats are much larger, and look much more robustly built, of concrete and stock brick – the newer flats are clad in the ubiquitous thin layer of brick or attached slatted wood, materials which have shown an unfortunate tendency to fall off. The major story is with one of the three towers – the one nearest to the river, naturally – which was completely cleansed of undesirables and sold instead as Z Apartments, luxury riverside living. It became a brief cause celebre via class war reality TV show The Tower.

All this, in theory, funds the regeneration, meaning in this case the cleaning and patching up, of the older buildings, or alternatively to their phased, currently seemingly stalled, demolition. None of the new buildings in the Pepys Estate – or anywhere else in London – have been council housing, though its regeneration has entailed several once council flats going private. The waiting list, nationally, is reckoned to be five million.