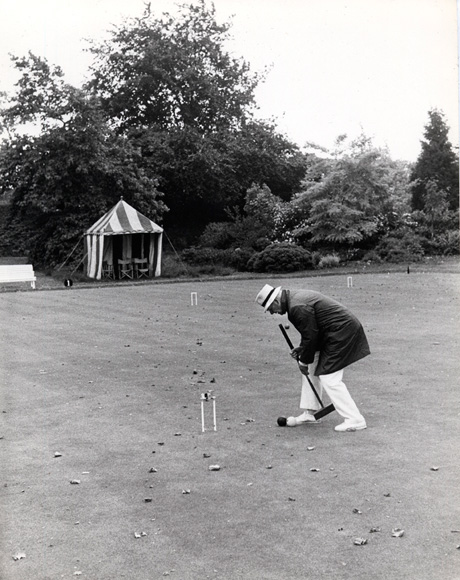 This week, The London Column is featuring the work of Dmitri Kasterine. Before leaving London for New York thirty years ago, Kasterine was a sympathetic and perceptive commentator on the English scene: his portraits of artists and writers (including Samuel Beckett, Graham Greene, Tom Stoppard, etc.) are familiar and definitive images for posterity – and his social documentary work, which we are showing, is impeccably witty and elegant.

In this photograph, we see a croquet player in a shortie raincoat (clothes are important in Kasterine’s pictures) braving inclement weather to play against – whom? The field is empty, autumn leaves strewn across the lawn; summer is over, the spectators have left, hours or possibly days earlier. His grip on the mallet is assured yet faintly desperate. He is playing against himself and no-one cares – except the photographer. This is croquet transformed into an existential game – or, perhaps, a nightmare from an H.M. Bateman cartoon: The Man Who Played Croquet After the Pleasure Garden Had Shut. D.S. 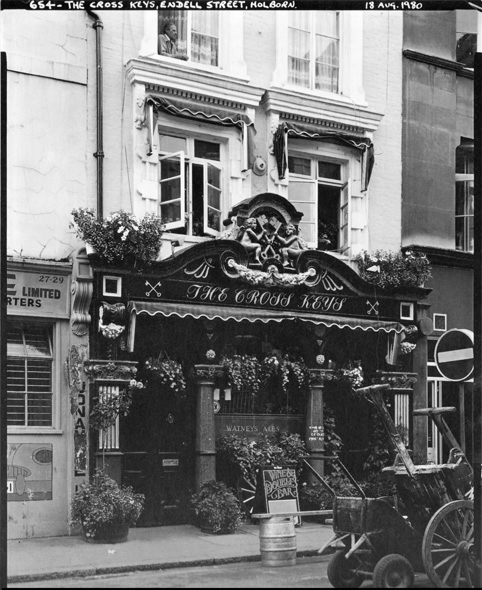 Old Wine Shades is part of the El Vino group, the venerable drinking chain that branches across the City of London. The one on Fleet Street was a legendary haunt of the local hacks in the days when ‘the Street of Shame’ was thronged with them, and El Vino’s continues to trade on its reputation as a City institution. However, an anonymous reviewer (‘A Customer’) on www.allinlondon.co.uk recently (August 2010) described Old Wine Shades thus:

A dreadful place. I work close by and El Vino’s is noted for rude staff and overpriced food and (especially) drink. On one of my few unavoidable visits (guest of others), my dining partner found a lady’s bracelet at the bottom of his coffee cup. A significantly chunky piece of jewellery. Not even an apology offered, much less anything off the bill. Basically, they trade on their historical connections and for that it’s worth a visit, but only on the way to somewhere better.

I have no idea if this is a fair assessment overall, but it poses several questions: what kind of bracelet was it? Did it have precious stones? What was it doing at the bottom of a coffee cup? Had its owner thrown it there as a protest? (surely you’d notice if your bracelet slipped from your wrist and into your cappuccino). Perhaps it was a prop left over from the filming of a romantic comedy, and the scene is easy to picture:  a lunch date goes wrong in an historic London location, Kristin Scott-Thomas chucks her bracelet – a gift from Hugh Grant – in his coffee, leaving him embarrassed as she stalks off. We’d then have a quick bit of comic business with the waiter, a star cameo from Ricky Gervais. Hugh would probably pay another visit to Old Wine Shades at the end of the film, this time blissfully entwined with Kate Winslet or Kate Beckinsale, etc., who then finds the bracelet at the bottom of her coffee cup. I am sure I’ve seen this film. D.S.

Brydges Place – “the narrowest alley in London” – runs between St. Martin’s Lane and Bedfordbury. Paul Barkshire’s photograph shows the view towards St.Martin’s Lane, where the alley narrows with an authentically Victorian oppressiveness before it opens out into the bright lights next to the Coliseum. Ahead, the pub signs denote the back doors of The Marquis and The Harp, the latter being one of the  nicest remaining West End pubs; immediately behind where Paul placed his camera is 2 Brydges Place, a civilized drinking club which, like the Harp, is much favoured by actors and theatre people.

This Dickensian little alley – a relic of a time when London was interlaced with innumerable such passages, usually forbidding rather than charming – offers many possibilities for drinking, socialising and making odd connections in general. On a warm night, or just when the pubs are so rammed that they spill into the alley, one can strike up intriguing conversations with strangers. And the stars are more vivid when you can only see a narrow slit of sky (past the sodium yellow of the streetlights, of course).

It is also a good spot to make a fool of yourself. Your correspondent went to English National Opera at the Coliseum earlier this year, and after a couple of sharpeners at the Harp, used Brydges Place as a cut-through – forgetting how crowded it gets on a Saturday when there is a matinee at ENO. As I trundled towards St.Martin’s Lane, I noticed a very beautiful woman waiting for me to clear so she and her friend could enter the alley: I recognised her as being the celebrated actress Saffron Burrows. No sooner had I clocked her and her cheekbones than I heard her say to her companion:  “We’ll have to wait for this large man to get out before we can go down here”. A fraction of a second later, I stepped on a loose paving slab and my desert-booted foot dropped into filthy rainwater up to my ankle. Smooth, smooth, smooth. D.S.