I was born right by Old Street roundabout on January 1st, 1927. Some of the kids used to beat me up – but in a friendly way. Hoxton was full of characters in those days. The Mayor was called Mr. Brooks and he was also a chimney sweep. Guess what? Before the coronation, he was putting up decorations and he fell off a ladder and got killed. Well, it happens. Then there was a six-foot tall girl, she was really massive. She used to attack people and put them in police vans. Maria was her name. Then there was Brotsky who used to kill chickens with a long stick. His son’s name was Monty. That’s not a common one is it? ‘Monty Brotsky’.

I worked two years as a cabinet maker in Hemsworth Street just off Hoxton market. But when my sinuses got bad I went to Hackney Road putting rivets on luggage cases. For about twenty years I did that job. My foreman was a bastard. Apart from that it was OK. But if I was clever, very clever, then I would have liked to be an accountant. It’s a very good job. And if I was less heavy … you know what I’d like to be? I’d like to be a ballet dancer. That would be my dream. 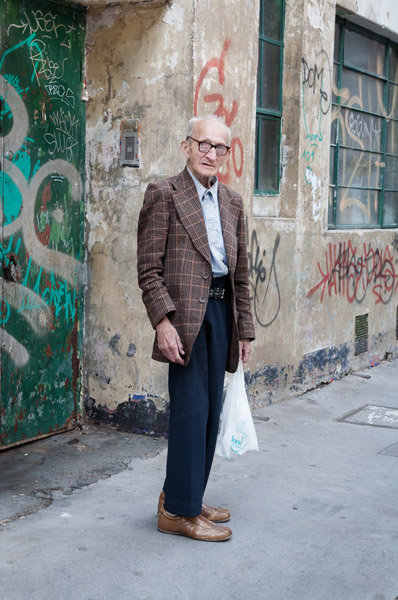 I don’t mind people taking pictures of me. But I wouldn’t let a girl take a picture of me. She might have a boyfriend. I don’t want any trouble. And who knows, he might think she wants to run off with me. You got to be careful where you go nowadays. Martin, if you want to take this picture you had better be quick. I don’t take a good picture when my bladder is full. 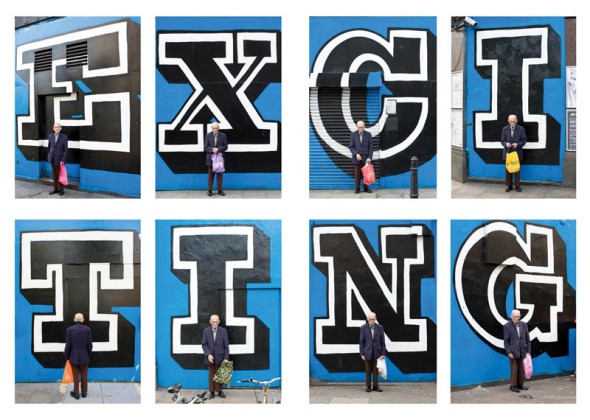 If I try, I can imagine the future. It’s like watching a film. Pavements will move, nurses will be robots and cars will get smaller and grow wings … you’ve just got to wait. They will make photographs that talk. You will look at a picture of me and you will hear me say: ‘Hello I’m Jospeph Markovitch’ and then it will be me telling you abut things. Imagine that! I also have an idea that in about fifty years Hoxton Square will have a new market with an amazing plastic rain cover. So if it rains the potatoes won’t get wet. I don’t know what else they will sell. Maybe bowler hats. Nothing much changes round here in the end.

There’s no point crying about things is there? People don’t see you when you’re sad. Best just to keep walking.

Do you know that I can’t eat lettuce? I’ve got no teeth, not for ten years. It’s hard to like lettuce if you haven’t got teeth.

… taken from I’ve Lived In East London for 86.5 Years, photographs by Martin Usborne, the debut publication of Hoxton Mini Press. More details may be found on their Kickstarter page.